Well I wanted to finally get my Figma Saber and I had enough for a Figma Miku so I headed to my local Anime store while I had the chance. Since I arrived on Sunday, September 21, 2008 I finally had the chance to go to the anime store, by bus. When I arrived I saw Figma Haruhi (already have), Figma Mikuru (I need), and Figma Yuki Nagato (Which I also need) on the rack.ï¿½ I asked if there were anymore Figmas and the lady said yes, pointing to a recently new pile of figures that came in just today (Wednesday, September 24, 2008). I then checked which ones interested me and took two.

END_OF_DOCUMENT_TOKEN_TO_BE_REPLACED

Well now that you got a summary of what I did in Europe I will now show you my Ferrari collection, Ferrari products on streets, and a Ferrari I saw on the street. There are 26 images to look through so there has to be something good to look at with something pleasing your eyes :).

My Ferrari Loot
(Click LInk for bigger pictures, will open in new window/tab.)


A gift given to me when I arrived in Slovakia, Bratislava. 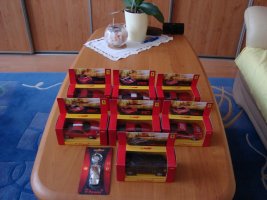 END_OF_DOCUMENT_TOKEN_TO_BE_REPLACED

Hello again, This will be part 1 out of the many entries Ill be doing to update the interested about my trip in Europe.