Happy 4th anniversary Arctic Kitsune! Me? No, no! I simply rode on Â that name (and still am) because it’s easier to share/link back with other fellow bloggers and friends. Ghostly Substance? I ditched that username as well.Â  *coughs* What a time to celebrate Varkitsu’s birthday onÂ ValentinesÂ day haha. More love for him then! 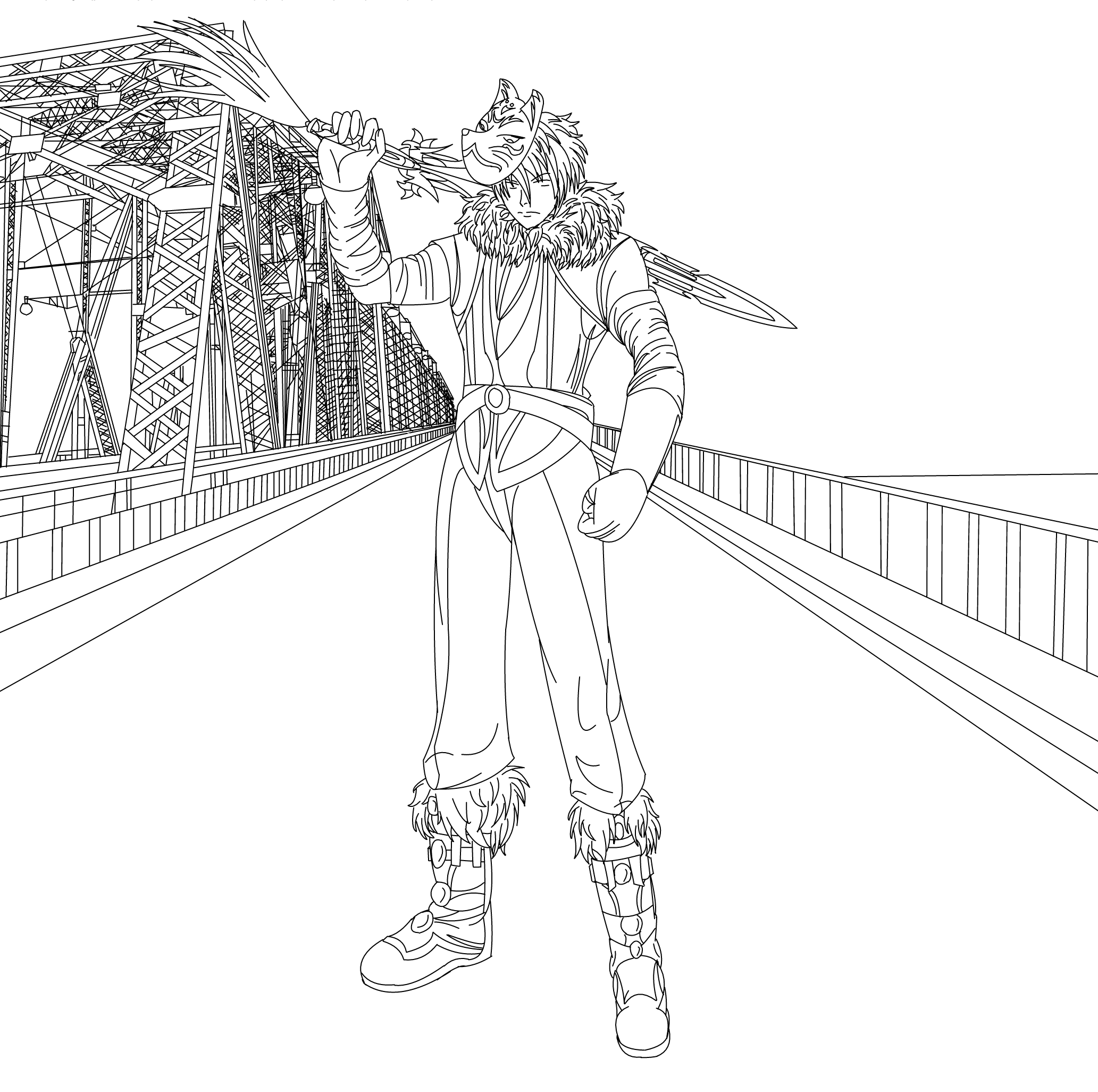 (Link – MySite) – Drawn by Denkikoiji– The completed one shall be added in soon once done – Consider this a teaser.

February 14th, 2007: IsÂ when my blog came up; 2008 for when I started reviewing Figma’s and geared the blog fully into Anime. Why? Just one of those random days that the site was set-up on; a coincidence. As for Anime, you have to thank Gundam Wing and Fate/Stay Night for that. Great Anime’s those are!

I believe 2010 was the best year given for my blog to shine in it’s intended manner when Danny Choo inspired me in 2006, and many others, to share their passion with like-minded individuals. I personally don’t like the word passion but I guess I’ll use it anyways as it’s the most common word to use for something you like.

Mine and my blog’s brief history:

– 2006: Fate/Stay Night re-introduced me and welcomed me into the realm of Anime. I end up watching Anime one after another.
– 2007: The year my blog went up for random ramblings (most were deleted). Nothing of importance.
-Â 2008: The year of learning how to blog and reviewing Figmas. Traveled to Europe.
– 2009: Â Year of Figma reviews and photoshoots. The year were I started treating Figmas like actual individuals within photos.
– 2010: Â Went to many festivals and events, photoshooted Figmas, and gradually obtained Busou Shinki figures. Went to first three Anime conventions (Otakuthon 2010, Naru2u 2010, and Ganime 2011). I consider 2010 to be the best year for my blog for what my blog was meant to be. Traveled to Cuba as well!
– 2011: Appears to be a continuation of 2010 with Busou Shinki’s, Festivals, and the reign of Shinki Renge. Hope to make this a great year! 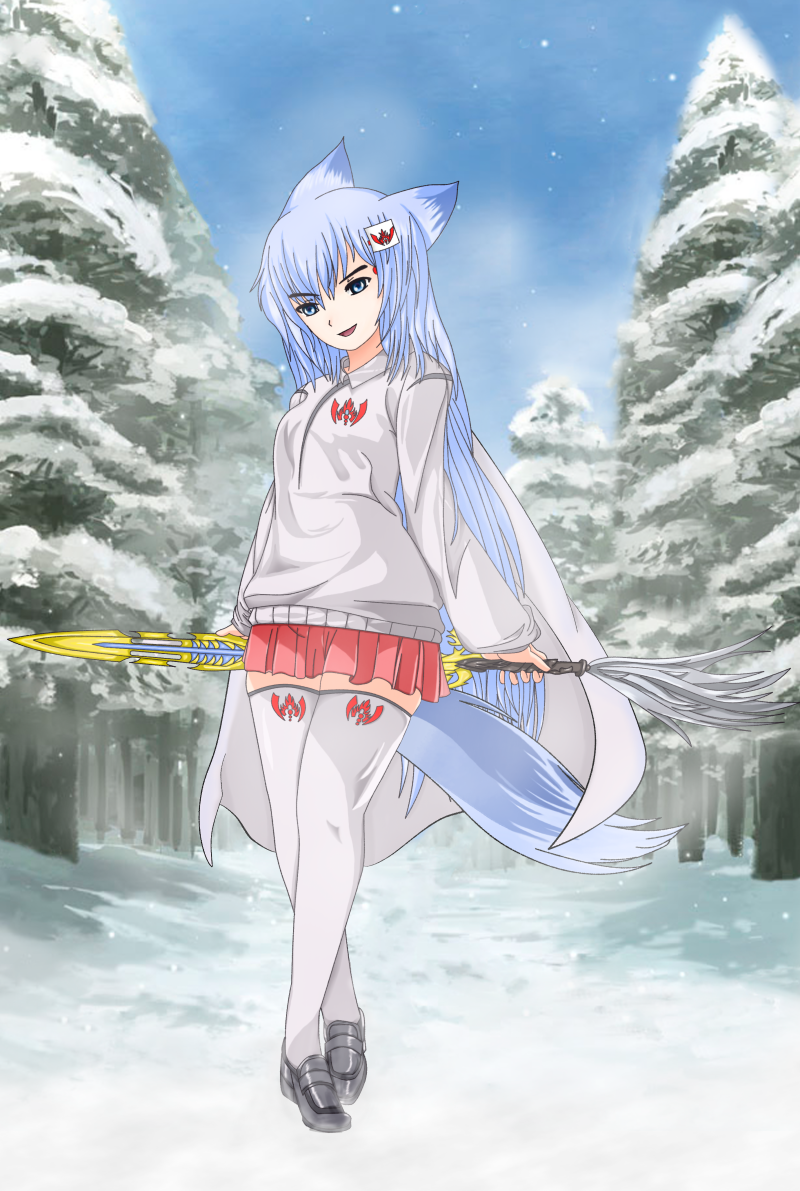 Why did it take so long? Why the lack of love or attention for my mascot? I can’t draw humanoid individuals, even if it’s to save my life. Thus the belated update on our furry friend over the past few years. He’s been stuck in his arctic fox and spirit form for two-three years (2008ish) because of such drawing limitations on my part. Instead, I’ve been pondering away at his background and making a musical theme for him. Denkikoiji also kindly offered to bring Varkitsu to light to bring harmless fun to Ottawa and other cities I may venture to. Thanks Denki!

– Blog Theme and mascot changes:
https://arcticukitsu.com/Blog/?p=196
(Read this to get understand a tiny-bit more about A.K)

I would like to host up his theme theme, just unsure how to add one onto here and where to to host it on.

– Who or what is Arctic Kitsune?

For those that areÂ knowledgeableÂ about the fox mythology in China, Korea, India, and Japan may know the basic background of who and what Arctic Kitsune is.

He is basically a ‘false/fake’ fox-spirit with 9 tails who originated (story-wise) from Northern Canada (Arctic Circle) and traveled south against his own will to Ottawa to feed on fellow hunters & trappers withÂ vengeanceÂ on mind back in 1900’s. His nickame is Arctic Kitsune may also be known as Varsis, Varkitsu, and Varsis; They’re the names I tried calling him that I thought may fit. He preys on humans that may prey on him, or others, and uses them as food sources.Â A.K may seemÂ malevolentÂ at first glance when preying on humans; he’s actually pretty benevolent type fox-spirit helping in his own way.

– In short: A white fox spirit with 9 tails with the ability to shapeshift into a human and vice versa. Not of true fox spirit birth.

– AÂ  fox spirit? Does he have any abilities as a “fake” fox-spirit?

Yes, of course – Winter aligned abilities, typical ‘kitsune’ abilities, and passive traits. Winter ones are granted from his arctic fox form and the other from the Japanese Kitsune mythology bits.

Someone also tried drawing A.K in human form a long while ago: 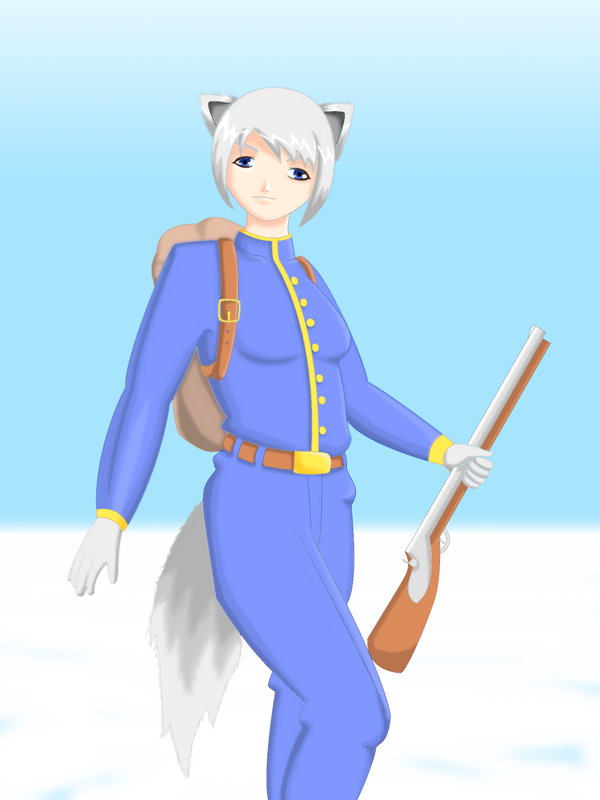 Nice try! I really appreciate the effort. A.K drawing in colonial times while either living with or hunting other colonials. And I take it she’s a French Arctic Fox? British = Red and French = blue. Happy hunting! Sadly, she wasn’t what I was looking for. Thanks for trying though!

So how does Varsis (Arctic Kitsune) behave? Hard to say as I don’t know the proper wording. I’ll try my best to describe his personality in various forms and as brief as possible.

– Fox form:
Behaves in a very cautious manner while always attempting to stay out of sight. Acts on his own and tries to use his old arctic fox habits to his advantage. When confronted by a human he attempts to study if the individual (or individuals) have ill intentions or aren’t worth his time. If ill intentioned, he may stalk the individuals until a proper situation allows him to harm or slay the individual(s) for feeding purposes. If peaceful, he may poke out into view “just for fun”.

If an individual that means no harm approaches he’ll respect the individual in return; No attacks meaning no provocation of any sort. When in this form he simply wants to trap hunters and trappers withÂ vengeance on mind, or forced to by his surroundings.

Just like a mask of his male personality, Varsis may use this form to play tricks, taunt, prank, seduce man, and even stir up general mishaps in a civil manner. Anyone and anything within her path becomes her plaything in a her playground. This personality basically works upon the fox spirit’s trickster personality, as mentioned in Kitsune myths.

– Arctic Kitsune is a fake fox-spirit? How so? Also, why a fox?

First off, he doesn’t take any of the routes mentioned in typical myths/folklore of 800 years of aging. Secondly, he isn’t Asian and I also wanted to merge some known First Nation’s (Canadian side) folklore into the mix due to me being Canadian. There isn’t much, but I tried adding as much folklore and myths within the ‘fox spirit’ realm as possible. Not sure if it shows, maybe later? And you’ll eventually learn about more of his background as time goes on.

Hey, if you want to make him whole and real then feel free to build a real shrine and pray to him somewhere Canada, or places I like :P. I doubt that’ll happen anytime soon.

Why a fox? I just grew to liking both cat and fox types in human form within various Anime-esque drawings, or characters with fox and cat attributes on them. That was back in 2006-ish. I guess I was attracted to their slyness, their powers, their passive beauty trait, and their wittiness. If they’re not sly, calculating,Â humorous, and great looking then they’re not the Kitsune’s I know. Everything I’ve seen and heard fox spirits do in anime and manga amused me to no end.

If anything, I’ll jokingly blame the artists that drew cat/fox ears and tails onto humanoid figures while making them attractive at the same time. I could also jokingly blame Anime/manga artists for the few fox and wolf type series out there.

(This just being the tip of the iceberg.)

But if you really must know in the shortest answer of why a fox as a mascot:
– Their abilities, their slyness, they tend to be calculating types, their appearance, and the way they tend to behave.

Oh, and apparently Ottawa is a furry capital, or at least slowly becoming one. From the looks of things they would make nice rivals for Varkitsu heh.

Planned goals and things to accomplish?
Well, theres lots I want to do and a few that I’d love to mention but don’t want to jinx them. I will mention that I want to do a visual novel (still), and want to travel to two cities in the northern hemisphere. What else? Well, lets find out together! 2011 should be a good year, as long as things go as planned…

Now that we both know more about my fellow fox-spirit I hope that both you and him may co-exist with one another. He means no harm, unless you have ill intentions and constantly provoke in return ^^. Â And ya, I’m aware that the banner with two Renge is Â a bit of an eyesore. That is just a temp’ fix before I switch to a more permanent banner a bit later in the year.

I would like to thank you for viewing my blog, keeping it up without harming it, taking the time to comment positively, and helping me out with a few corrections here and there! It’s actually a fun ride seeing both myself and others interested in whatever gets posted up on here, or on other similar sites! Â Now onto taming the future with Shinki Renge & Varkitsu!

P.S: Valentines Day? It’s a day where you’re supposed to love someone that you already love and treat singles with absolute disrespect. This is the day where companies make mony, kids and teens get their bad day, and where Otaku’s ‘make love’ to their 2D wife/wives. The thing I dislike about V-day is how negative minded it makes people and how it sends this message that you need a calender celebration to love someone that you should be loving in the first place! Treat a person with respect for 1 day and disrespect them for the other 364 days? Lovely. This comes from a person who loves celebrating various holidays, minus V-day.
On the bright side: More love, more chocolate, and maybe something “extra”. Anyways…*poofs*