Kidou Senshi Gundam, an Asian version (though still essentially Japanese) import of the Gundam game. This is another one of my late gets as I was simply briefly awaiting a North American announcement, sadly with no news as of yet. Hmm? This package seems slightly bigger then normal? 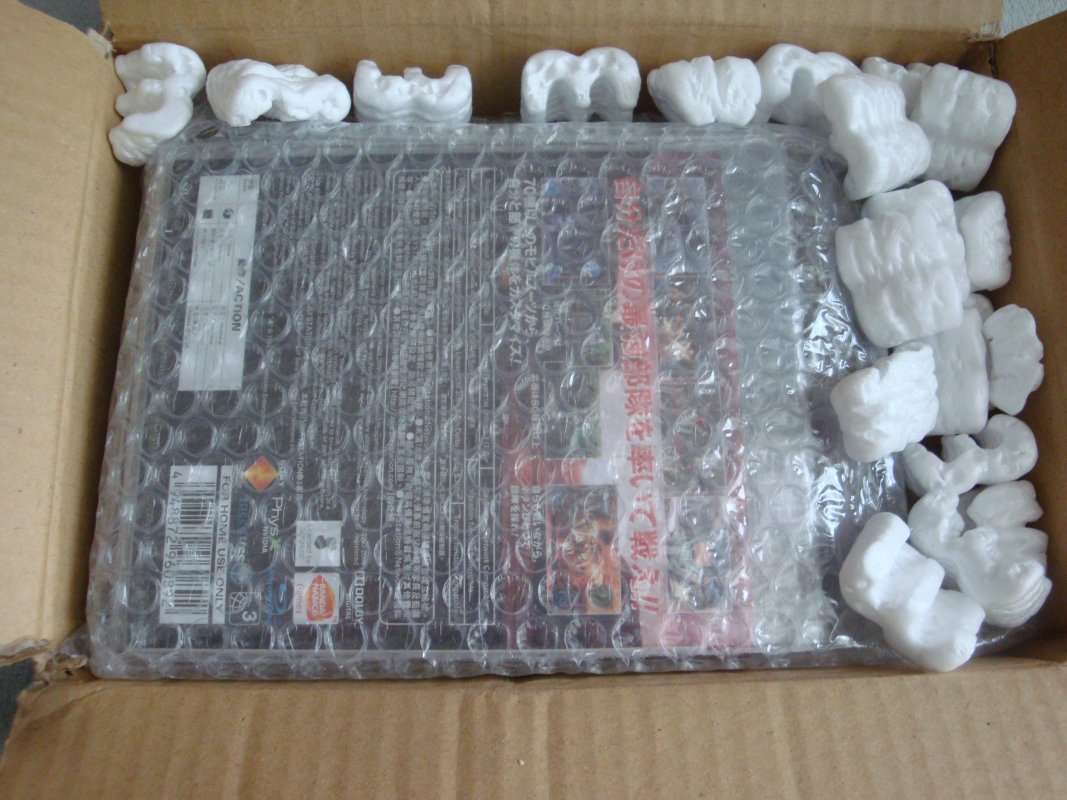 PSN: eurosubstanceÂ  – For those who are interested in playing online in co-op mode.

I acquired Gundam Senki UC 0081 from Play-Asia with a total of $93 CAD today. I thought I would “review” it as it gave me a nice smile with both the door curtain and that it is one of the best Gundam games that has been released (or I played). I’m absolutely confused as to why this polished Gundam game containing improved gameplay, smooth controls, hordes of mobile suits, RPG like elements, Free-mode, Multiplayer, co-op and etc isn’t being at all considered to be sold world wide to improve Gundam sales. It seems like a blunder if Bandai-Namco isn’t considering it to be sold worldwide if they want Gundam fans to play it.

Just randomly inserting this image due to some static causing the puffy stuff to stick. 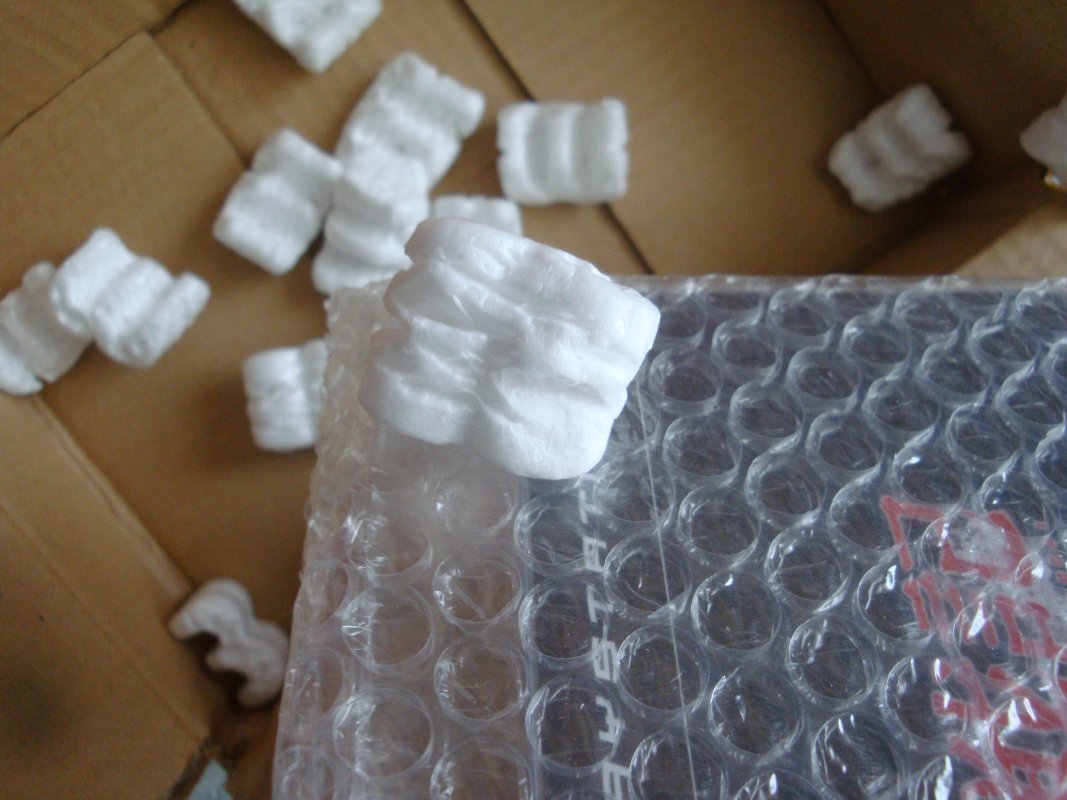 This game is basically a sequel to Gundam: Crossfire (Target in Sight) (Rated 3.5 on every game review site, I rate it 5/10). Everything from Crossfire has been improved and has more then what you’d expect from a half assed prequel. How improved is it? Instead of a half-assed story mode and split screen multiplayer you now have Free-mode, 8 part tutorial, Federation and Zeon story mode (or scenerio as its listed), A multiplayer with various game modes and co-op. Co-op? Oh yes, 4 player co-op for either the Earth Federation free mode or the Zeon side. Need more convincing? Gamers on Gamespot rated the game 8.9/10.

More convincing? K, let me break it down as to what the game contains. 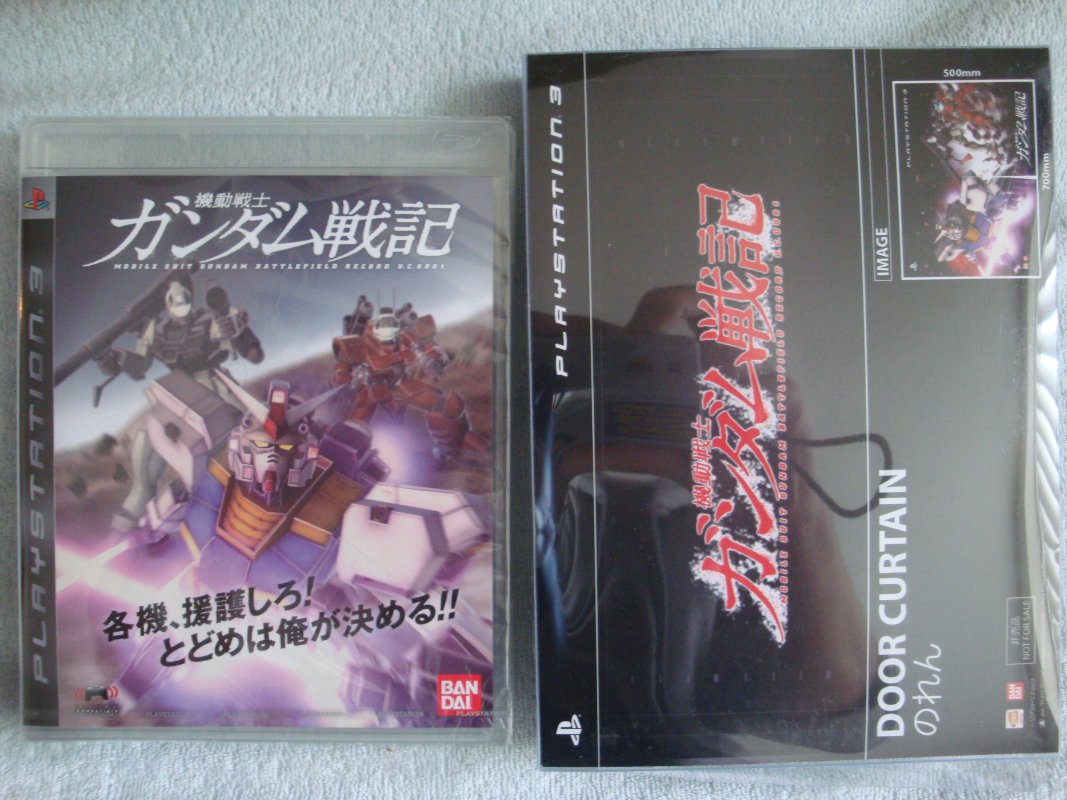 Scenario (Story mode):
You take command of a mobile suit squad as you bring victory to either the Earth Feddies or or the Zeons.
– Earth Federation – Phantom Sweepers
– Zeons – Invisible Knights

Free Missions:
The Choice is yours!
– Earth Federation:
Start from Libya and play whatever missions you feel like from there on. You start off with a GM. You rank and level your Feddie pilot as you do more and more missions. You earn points to upgrade your mobile suits, gain parts, and even points to buy other mobile suits or weapons.

– Zeons:
Start from Libya and play in a slightly more linear fashion at the beginning. Same as with the Feddies, but you start with a Zaku 2 *phew*.

– Mercenaries:
You gain this 3rd faction as a gift/reward for completing the scenario mode. You rank your pilot, gain parts, and etc as usual but the mobile suits cost double then they normally would. You can buy whatever mobile suit you want as they unlock.

When loading a saved file you will be prompted if you want to play offline or online, this is how you get online.

Tutorial:
This mode lets you brush up on your skills without dieing an embarrassing death. Its an 8 part tutorial which informs you as to how to play the game within a basic manner.

Options:
-> Never touched it but you know what should be here

Install:
Allows the game to load in a swifter manner by installing part of the game onto the PS3.

Movie:
A must for any game, you can view cinematics and clips which were previously played on your run throughs in Scenario or Free missions.

Internet:
-> Never touched it, brings you to their homepage?

The game is heavily supported with Downloadable content. These add-ons can only be found on the Japanese Playstation account and the game can be played on any Playstation account or PS3. You get more maps to play on, payware mobile suit add-ons, and free ware “emblems/decals?”.Â  To boot, the game’s combat mode is very user friendly and you could probably pick up the basic controls in just a few minutes. Can’t afford the game? There are two wallpapers for you to choose ^_^. Trophy supported as well. 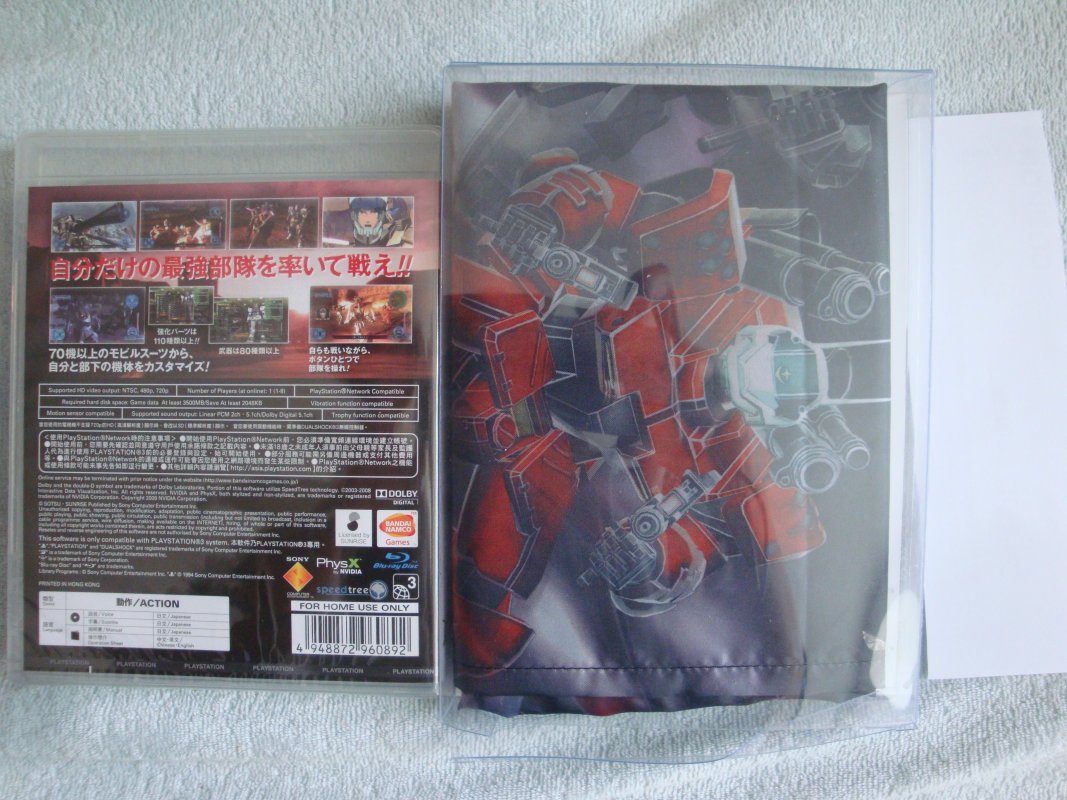 Scenerio/Storymode:
Basically a Free mode turned into a linear mode. You gain points, earn new weaponry, and even hire other pilots to pilot other mobile suits. Fine concept but wasn’t polished as much as it should have been.There were training missions and main missions, you had to start over with limited free mode.

Multiplayer:
A basic split screen with no signs of co-op. You can only use what you unlocked.

Did I mention I gained a free door curtain? Well, maybe not free anymore as the game costed $93 CAD while the average would be around uh….$70 CAD? Its a lovely door curtain if I may add, totally random and nice design. 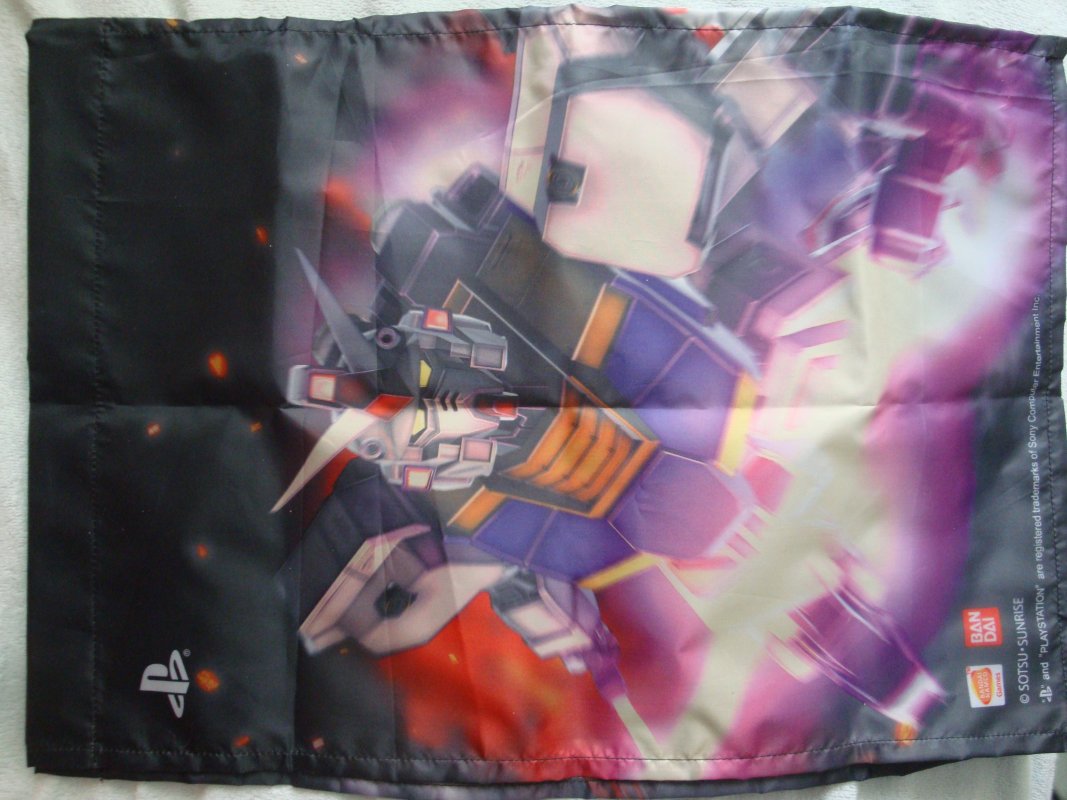 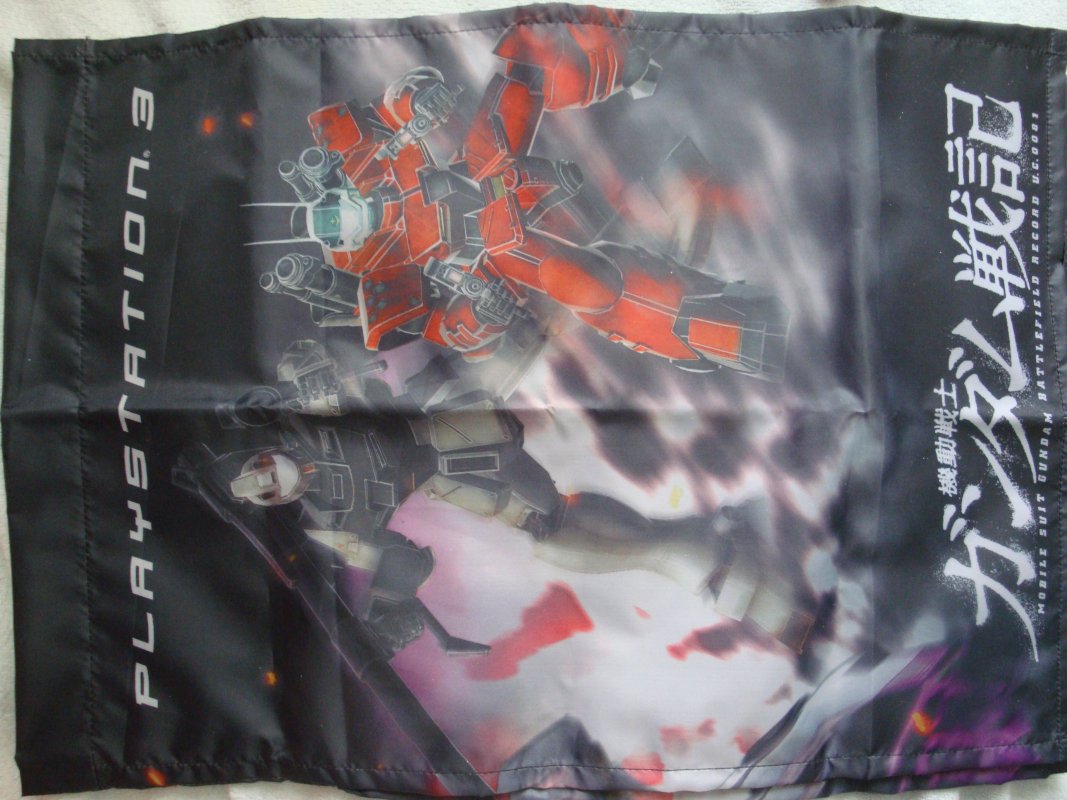 Full view of the Door curtain. 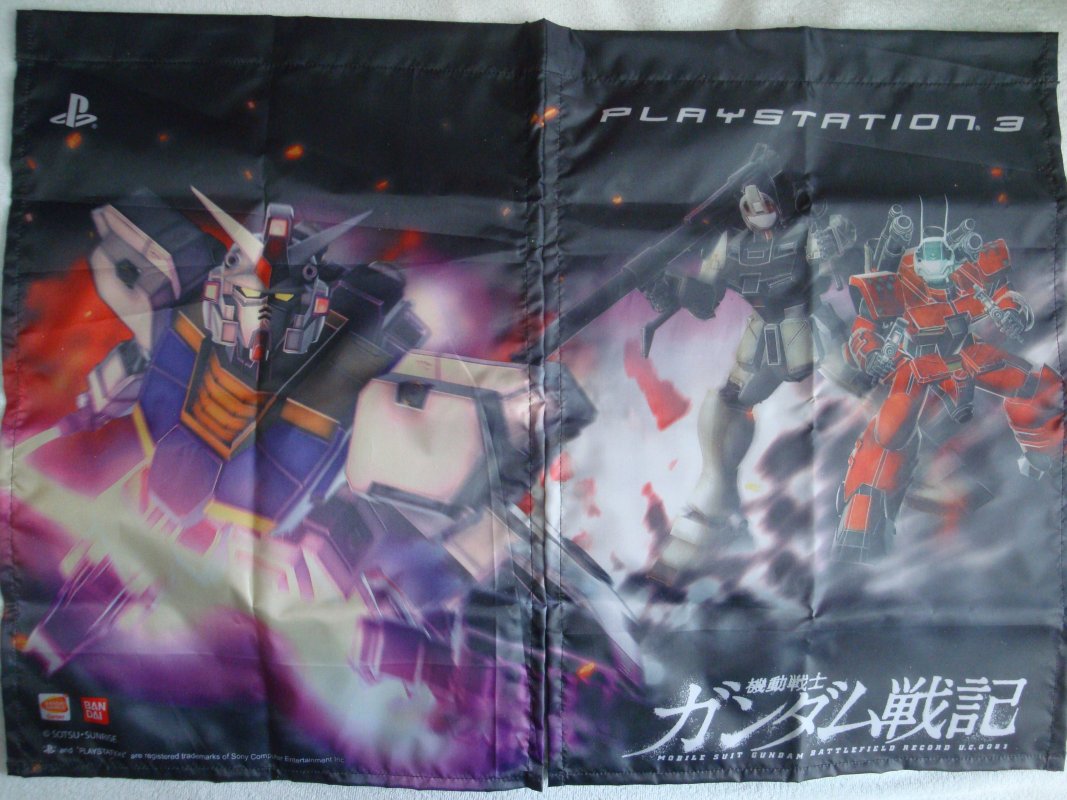 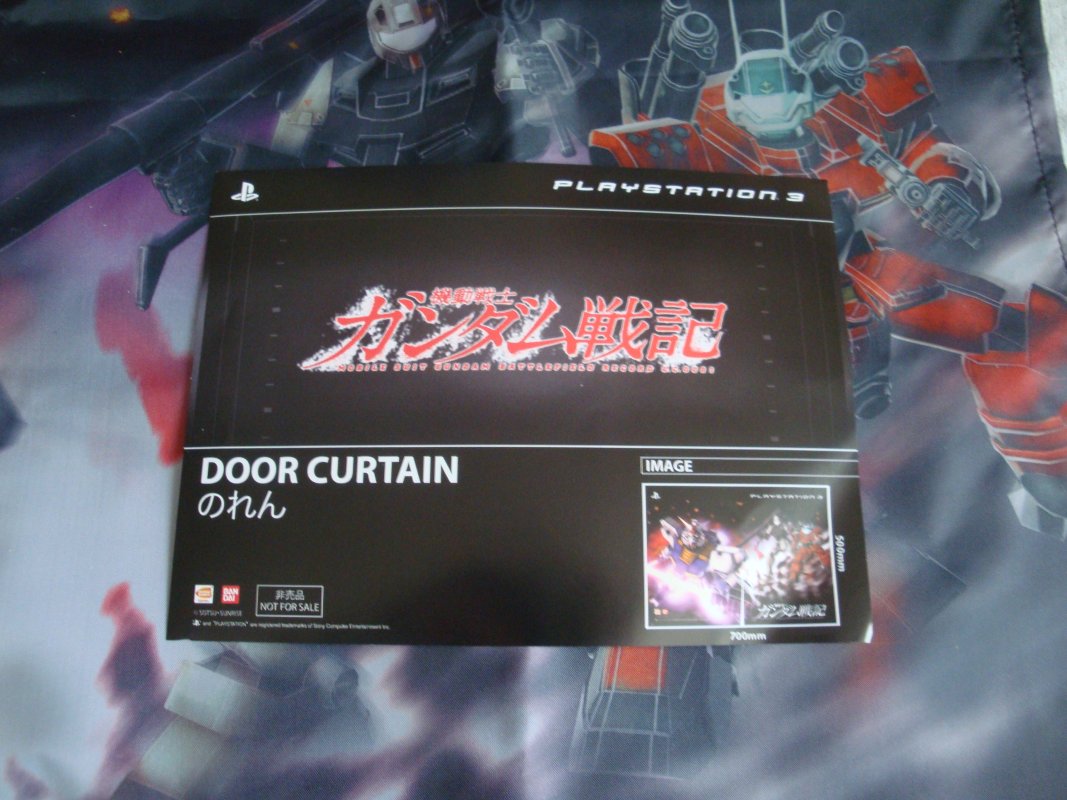 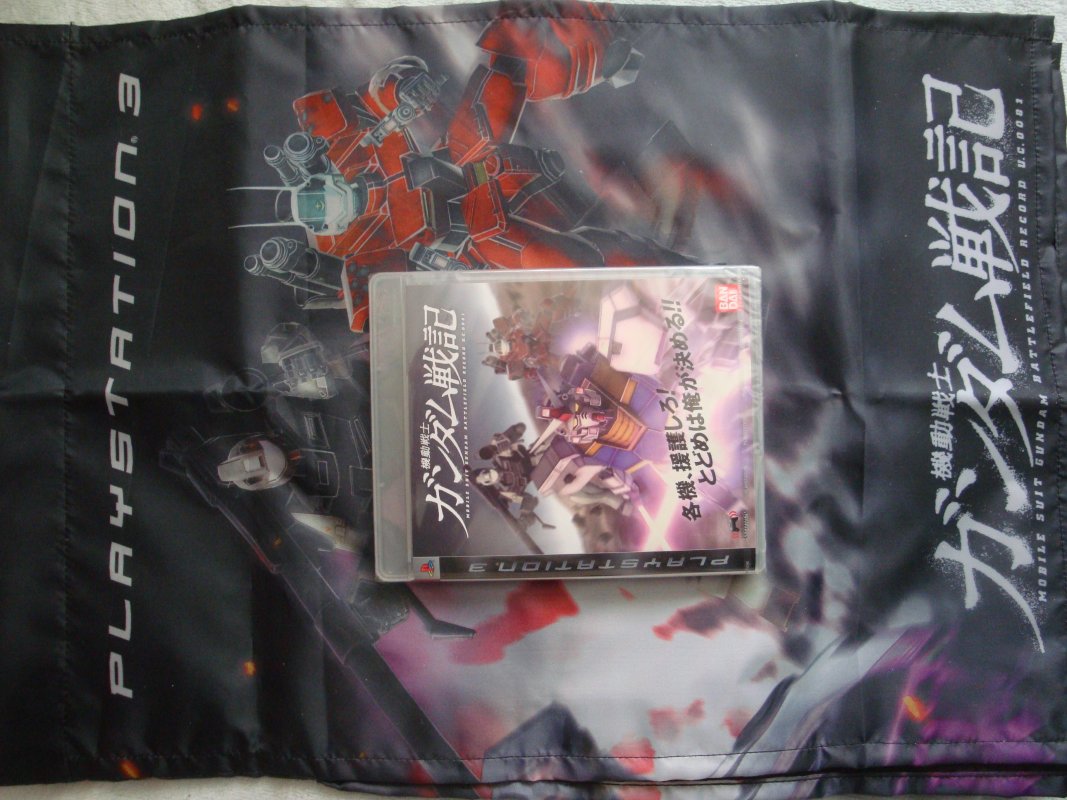 The disc was randomly and perfectly upside down. Note the background image that go mostly ignored on other game discs. The only other game box with the background is F1 Championship Edition (PS3).Â  I’m wondering if the European or Japanese game boxes contain background art… 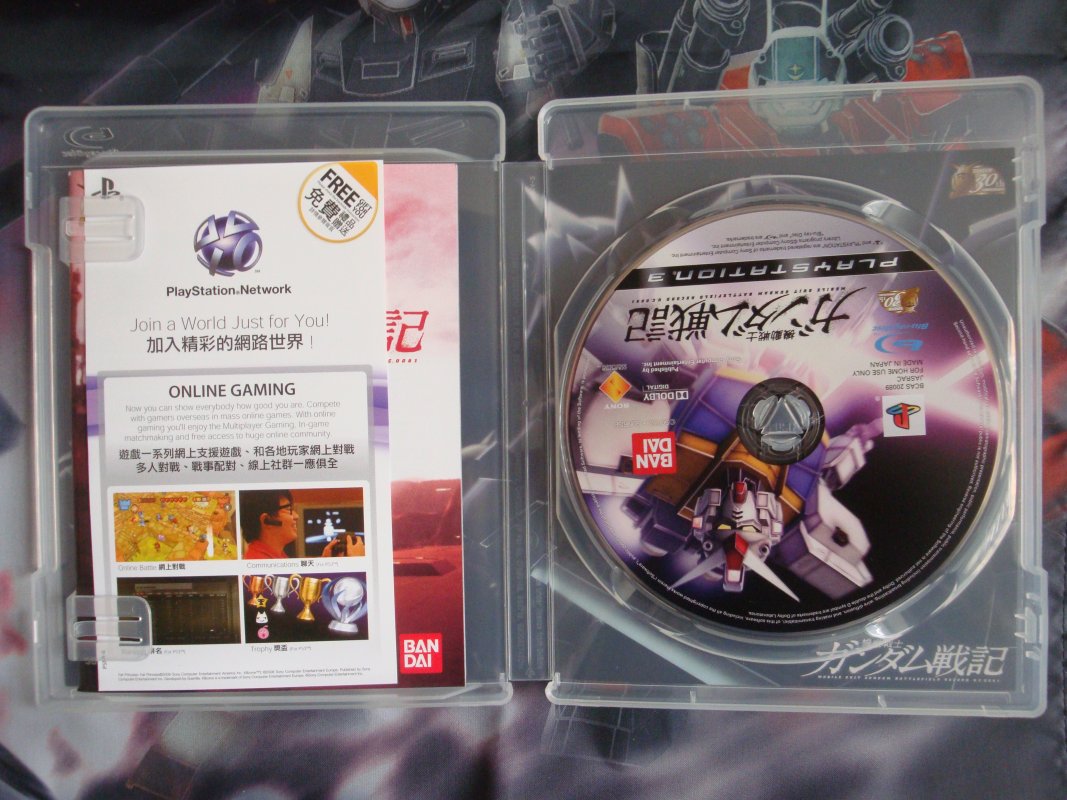 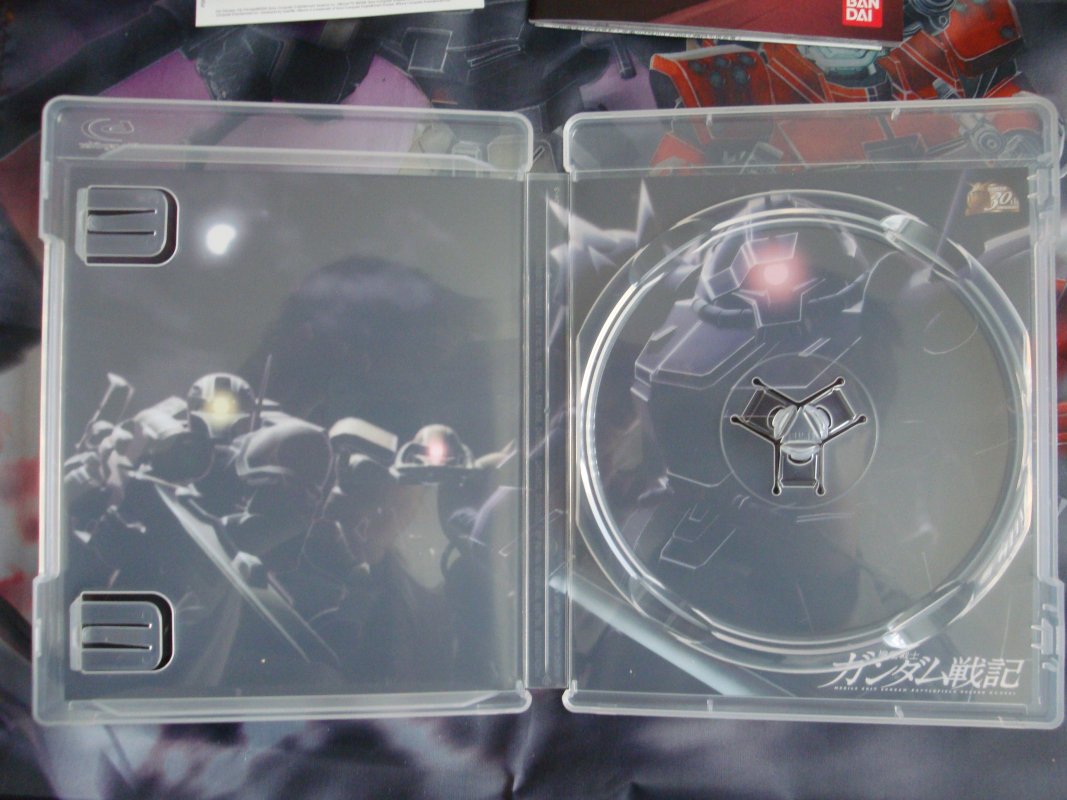 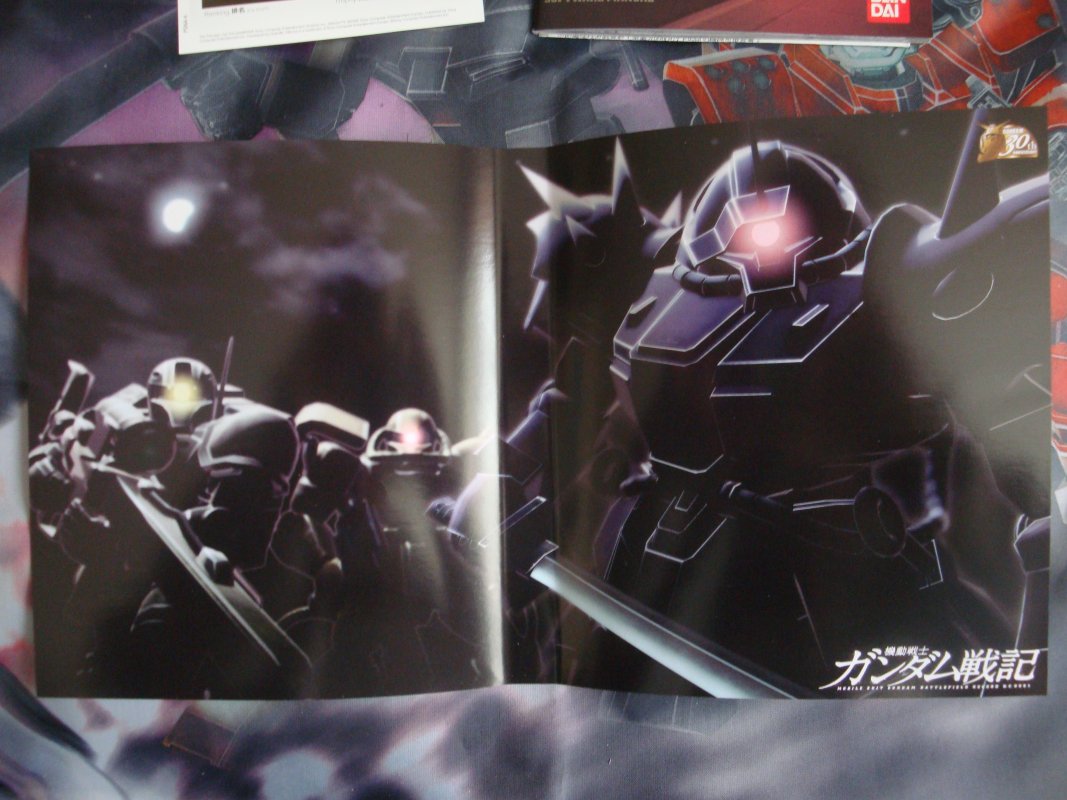 And the translated control guide and how to navigate within the game in Chinese/Japanese (going to play it safe :/) and English. 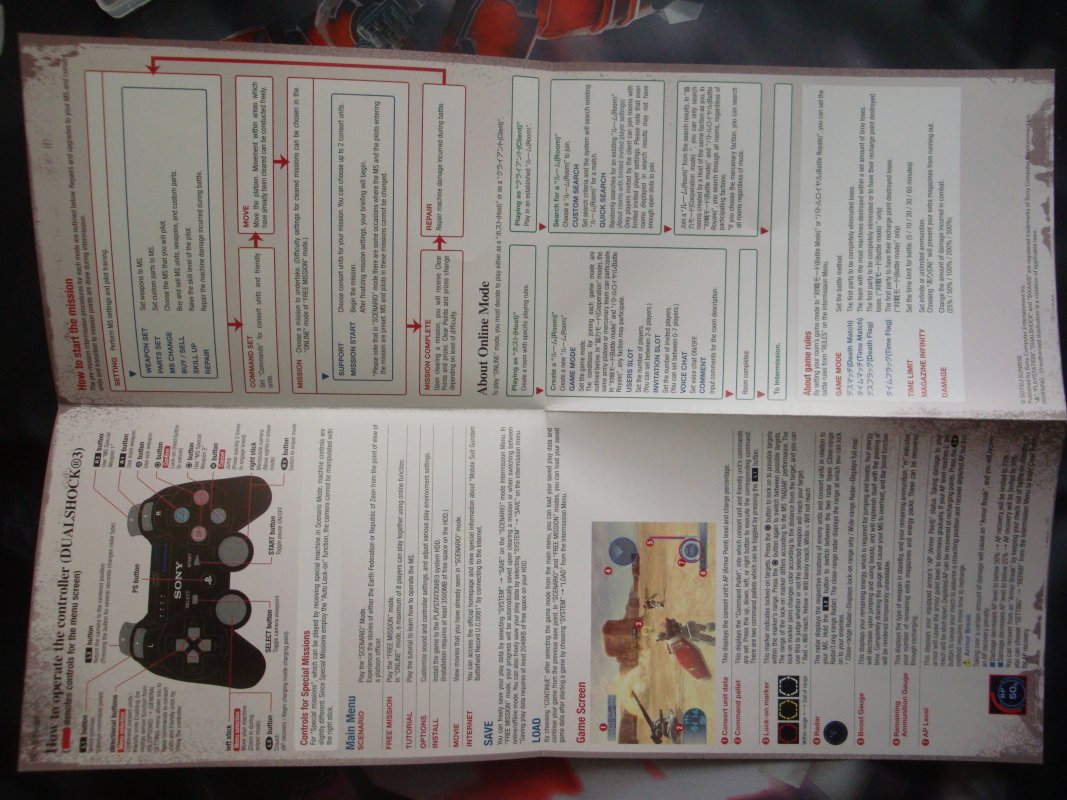 And a random look at the mecha side of the manual…… 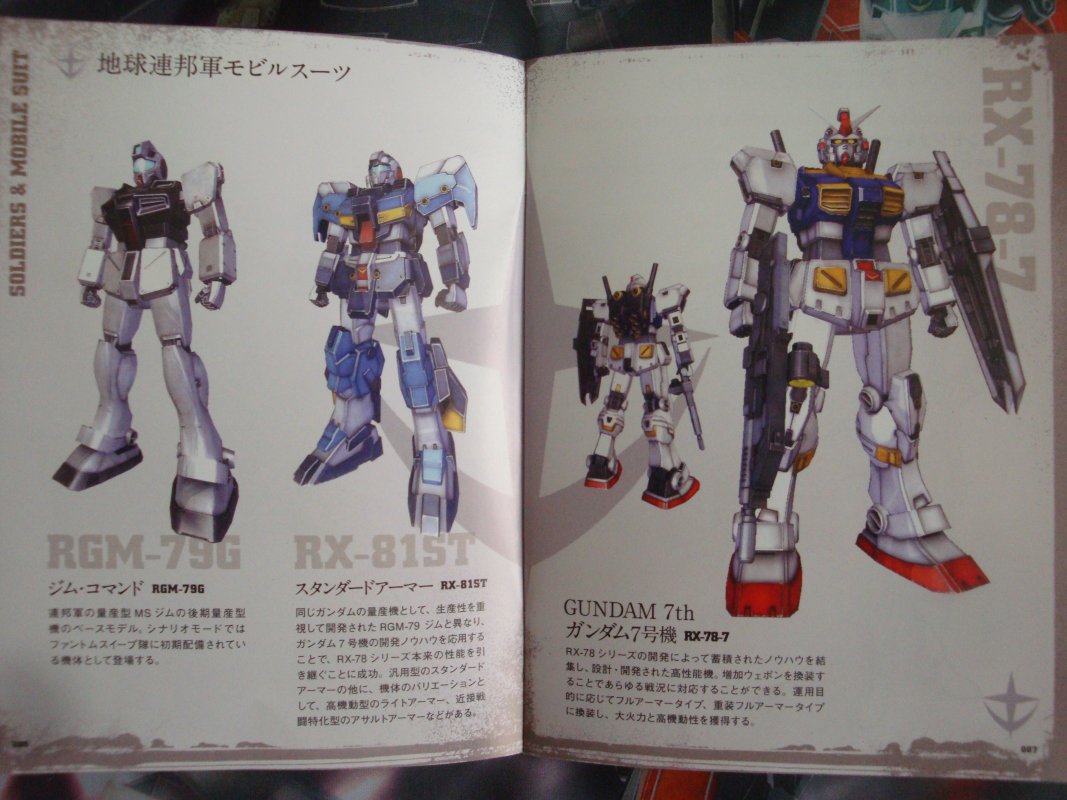 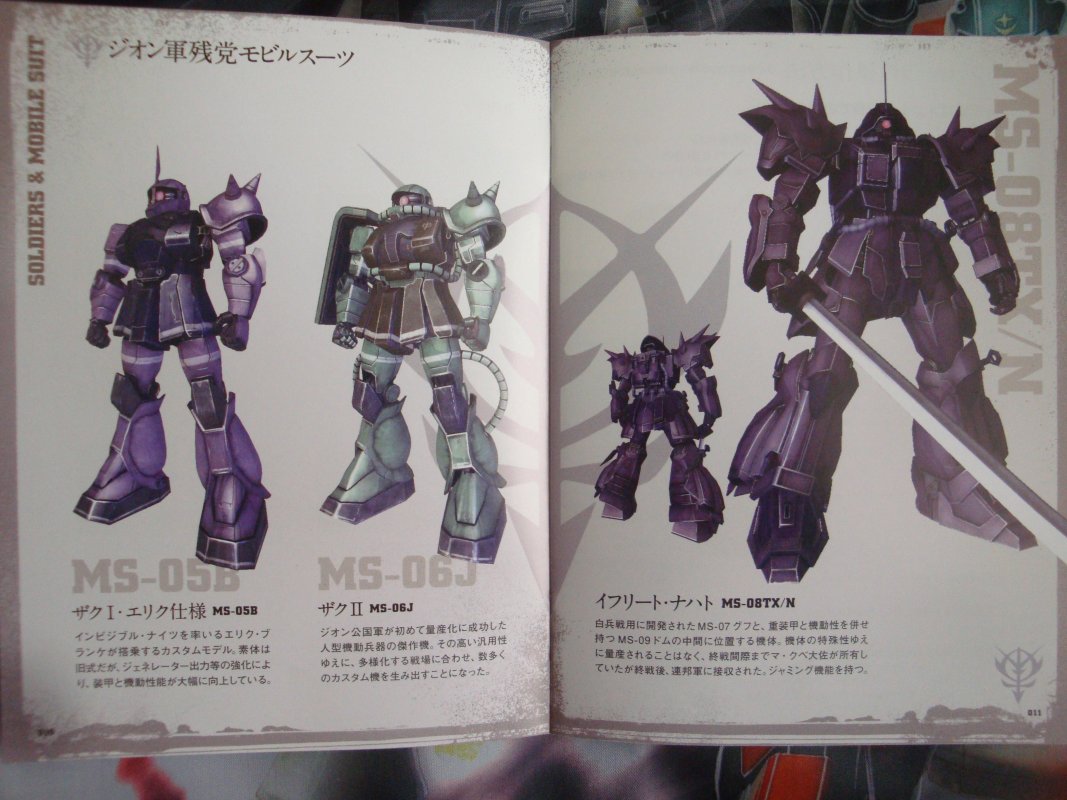 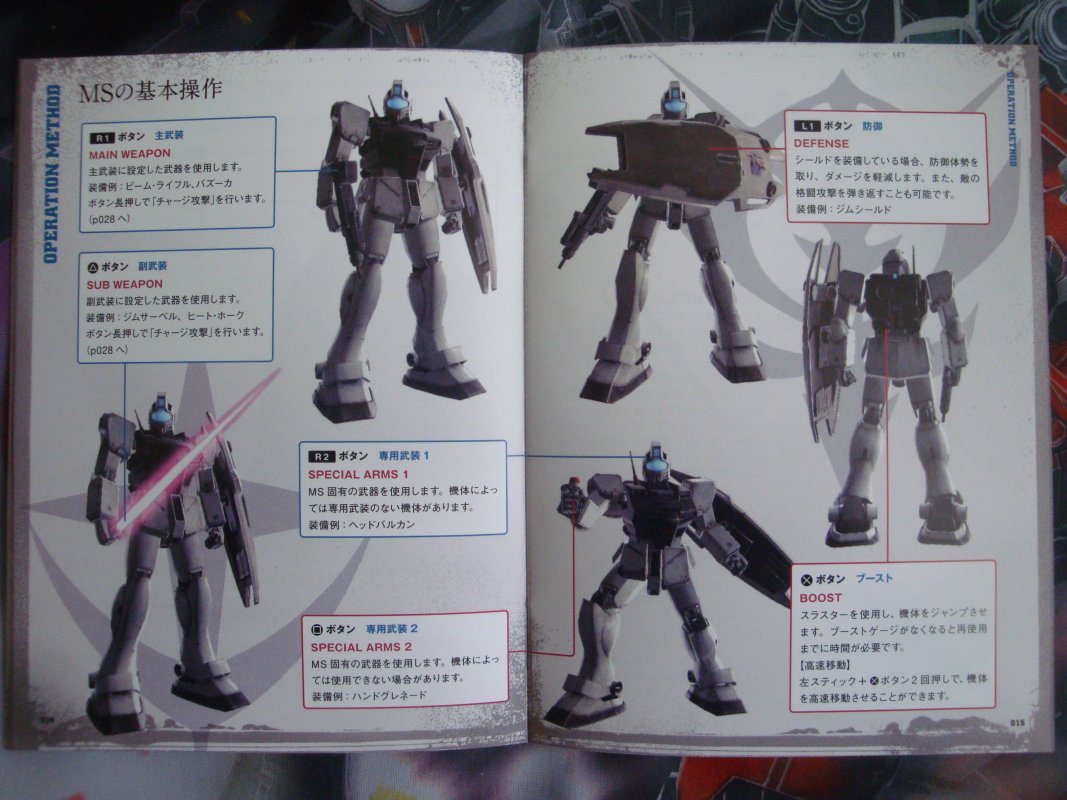 – Co-op:
IF you are ever stuck in Offline mode you can always being your free mode missions online. Not into co-op? There is also PVP mode. But to stick to the Co-op side first, up to 4 players can join and 2 can start playing almost immediately. I noticed it was kind of hard to get more then 2 people total to start a game from scratch as people instantly leave right after from a semi-lengthy wait. You also have to note that there is a majority of players with overpowered or higher ranking mobile suits that will try to game with you. If you prefer to be helped with higher grade mobile suits then feel free to host a game to see if they could assist you, but do note they will horde all the kills. The code of honor/respect that was mentioned in a FAQS has been ignored.

Once you do get one started you will find it epic in some form as to how certain maps make you struggle slightly. The scenery may help with the atmosphere as you are left alone to hold off a sector and hastily joined with a swift mobile suit.Â  You always see the position where other players are at and even see their name tag sticking from the other side of the map. As there are four players and actual common sense is involved, players can split up into different sections of the map to handle a certain group of mobs. The points also increase with difficulty as the stakes are raised up another bar, gaining better parts in the process.

– PVP:
(Will update in the future)

Sadly, I don’t have any way to record my PS3 gameplay unless I recorded it with my camera. If you want gameplay video then I recommend you check out Michi’sÂ  youtube channel for some Gundam gameplay. Until I get some kind of recording device this simple review would have to do, unless you want me to record my gameplay with my Sony camera…..

(Update – December 17, 2009: I took a video on request by “Rogelio” to show him how his copy would end up playing in less then a weeks times.)
Video shows the menu, the beginner’s level, and then a helpful quick Zeon mission for points farming offline.

I’ll gladly take requests if you are up to viewing low quality videos :P. I got access to more mobile suits now.

You can clearly see how improved it is over Crossfire and how its being supported over in Japan. If Bandai wants to rake in some sales this would be the game to do it while other gamers would simply import it and struggle with the language barrier, as I am. The game is straight to the point and highly improved.Â  If you want to get into the story make sure you know written and spoken side of the Japanese language. If you are bored or stuck you can simply replay missions in Free Mode and gain more points as you semi-mindlessly grind away, or have some fun on the multiplayer side of the game. The combat is simplistic enough to do quick gameplay burstsÂ  and doesn’t take hours of concentration to complete. Finding a game is basically easy enough if you can get from one person to a total of 4 (or 8 for PVP). Playing online is a very good experience as the AI tends to flop the singleplayer’s more serious missions. Multiplayer is quite fun and there is always a chance to find three more players to assist you, or a simple one other player.

I recommend Gundam fans who haven’t bought this to import this game as to support a well made game and hopefully gain more like this. Like the score on Gamespot I give it a 9/10 as well – multiplayer lacks a bit through its interface. Heres to hoping I can stream my gameplay onto youtube in the near future, should get better mobile suits by then.

– Thanks for viewing and I hope this was helpful in some form.