On my way to Best buy me and someone else noticed a Sushi shop where another restaurant used to be. How many of you within Ottawa go for sushi, or similar? I remember making regular visits to Chinese restaurants and buffets. The first Japanese Sushi I officially noticed (since I wasn’t a Japanese influenced person in the past) within the city was the one within the downtown Ottawa region. A similar one to that is closer to my neighborhood and adds another 5-10 minutes to my 20 minute bike ride to the Anime shop. 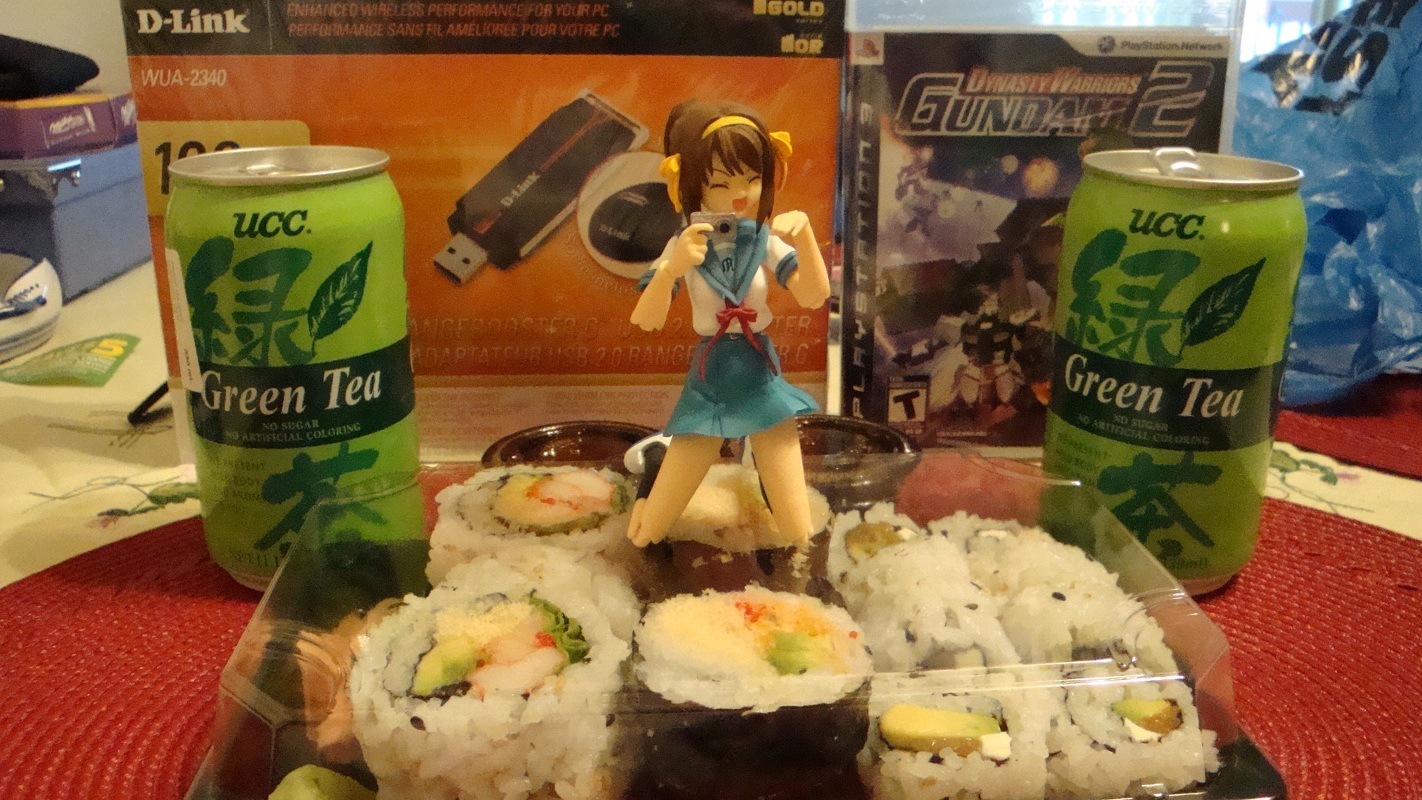 I tried to get a nice shot while I had one bar on left on my camera’s battery, I think its a decent shot showing my loot for that one day. Two green teas, two style’s of sushi, Gundam Dynasty Warriors 2 for PS3, as well as the D-Link USB thing that I hope allow me to play Monster Hunter Freedom for PSP. Oh, right the location for the two Sushi shops I know of, K-on it *attempts a pun*. Also note that I’m not doing this to advertise but to recommend some good Sushi shops within the area like other bloggers do.

Sushi Shop – 140 Rue Sparks – Ottawa
The one for the Ottawa, Downtown region would be this:
– Homepage: Link to homepage
– Location: Link via Google

I once got a take out there once and it was pretty good. The pre-made Sushi got the taste of approval from my taste buds as well as being nice place to relax every now and again. I tried to go back there again but haven’t really notice an Anime store to drag me to that part of downtown region. For those that have gone here what are you thoughts on this one?

Go for Sushi – 1667 Merivale Rd – Ottawa
Nice little sushi shop with friendly people.
– Homepage: Link to homepage
– Location: Link via Google maps – (Not registered on Google yet but it is the smallest building in the center of that map)

Tried a take out and so far it seems pretty decent. It seems I shall be going to this place more often due to its closer biking distance (what, I like my bike) and it is closer to my neighborhood. Also being closer to my Anime store’s route it makes it a an easier place to visit. It should take me 30 minutes to bike there making it a better choice to eat at. From the reviews I read for the Sushi Shop (above) people recommended this newer one for its cheaper price for the deals. Your choice which one you choose really.

And lastly the local Anime store I go on on a regular basis.

Anime Stop – 1400 Clyde, along side Merivale Road.
My local Anime store I get my Anime loot and Figma’s from.
– Homepage: Link to homepage
– Location: Link via Google (Building to the left with the yellow like strip)
– flickr: Link to article

This is where I get 95% of my Anime loot and they have a decent price. Since I can’t get my Anime loot anywhere else (or ignorant of other places) this is where I got most of my Anime figures and Figmas. Sometimes they don’t have what I want so I request them half the time and get 90% of them (availability issues). If anybody knows of a similar Anime shop or places to get other Anime loot from then feel free to suggest some places (no net locations).

I’m sticking to first glance figure reviews and photoshoots now. Oh, before I do let me do a quick Japanese can review, heh. 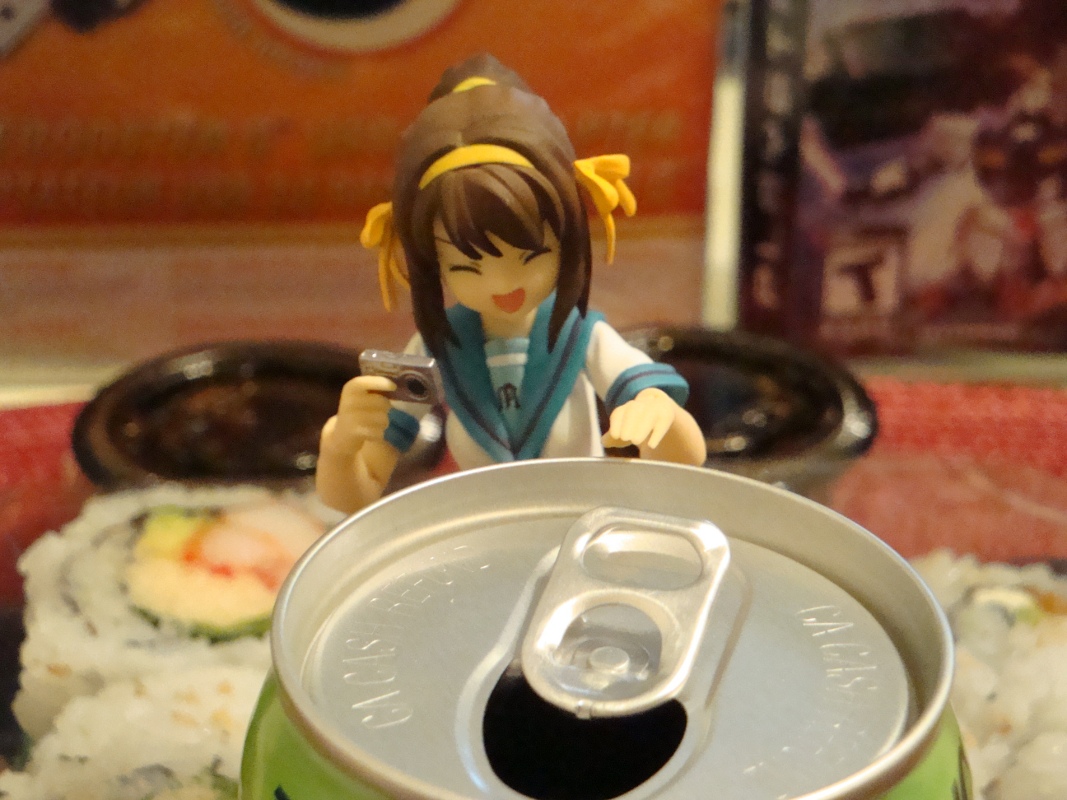 Those Japanese cans are pretty strong, puts those pop cans to shame. The Sapporo beer cans, this one, and some random Chinese coconut drink all seemed to of had more layers that made it nearly impossible to crush with normal hand crushing strength that you would apply to Pepsi/Coca-Cola cans. Well, not that it matters but it just something small and unique that makes things interesting.

Oh, I dare you to look at the above image and telll me if you see a smiley face. 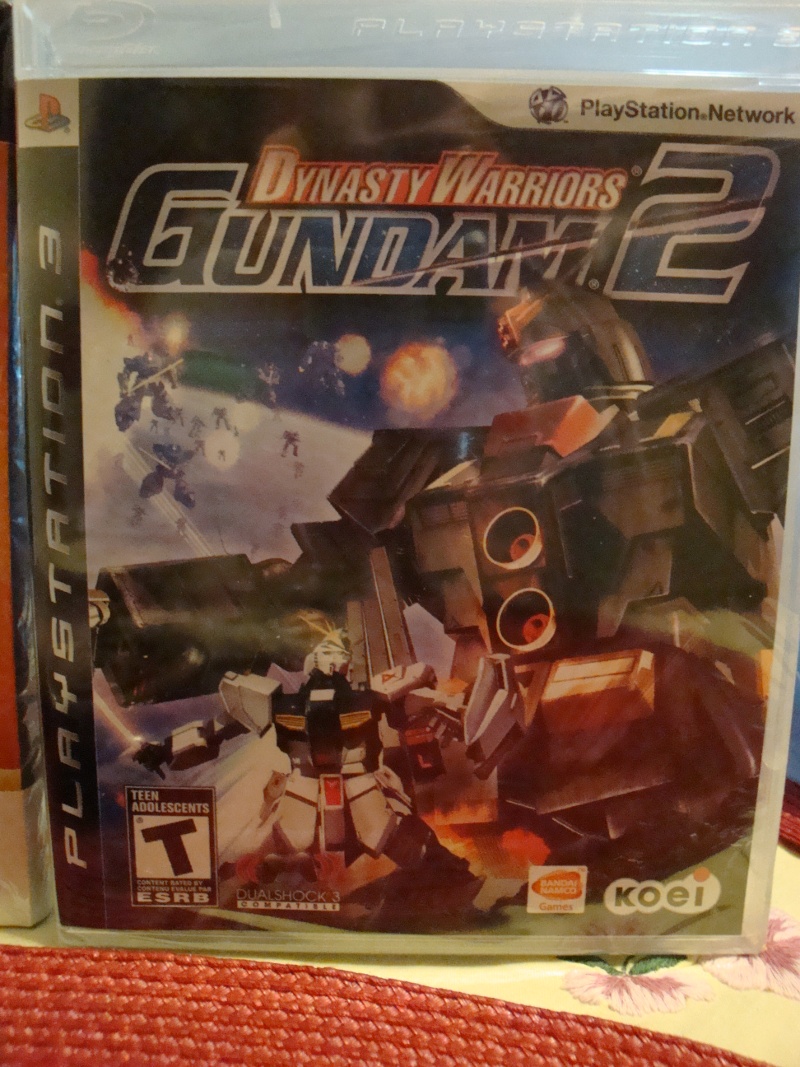 I’m now pleased. I sent my PS3 to finally get repaired after letting it sit in my room since January for Remote play uses. I sent it off yesterday and should have a new one on Monday (or so I was told).All I need to acquire now is Valkyrie Chronicles for the PS3 and I should be set until late summer. Going to play these games when theres shitty cloudy weather and rain for the majority of the week, or after 8 pm when it gets dark. I like rain and clouds but not the constant ones that Ottawa seems to be getting as of late making it gloomy for nearly two weeks.

For those looking to game with me in the next few weeks then add me on PSN with “eurosubstance” and let me know how you got my PSN name. Maybe we could play some multiplayer or something.

My camera battery died so I couldn’t take more pictures of the Sushi, ah well. See you in the next blog article with more Figmas.