Ah, Pokemon! The good old days as a kid playing Pokemon Red & Blue on the original Gameboy before the Gameboy got looted from me at school. I acquired the Pokemon White bundle due to nostalgia and because a few people I know used to, or still do play Pokemon. Makes a nice themed purchase for my Arctic Fox persona, with it being white and all. It was also a nice gift to myself on my special month – Epic March! 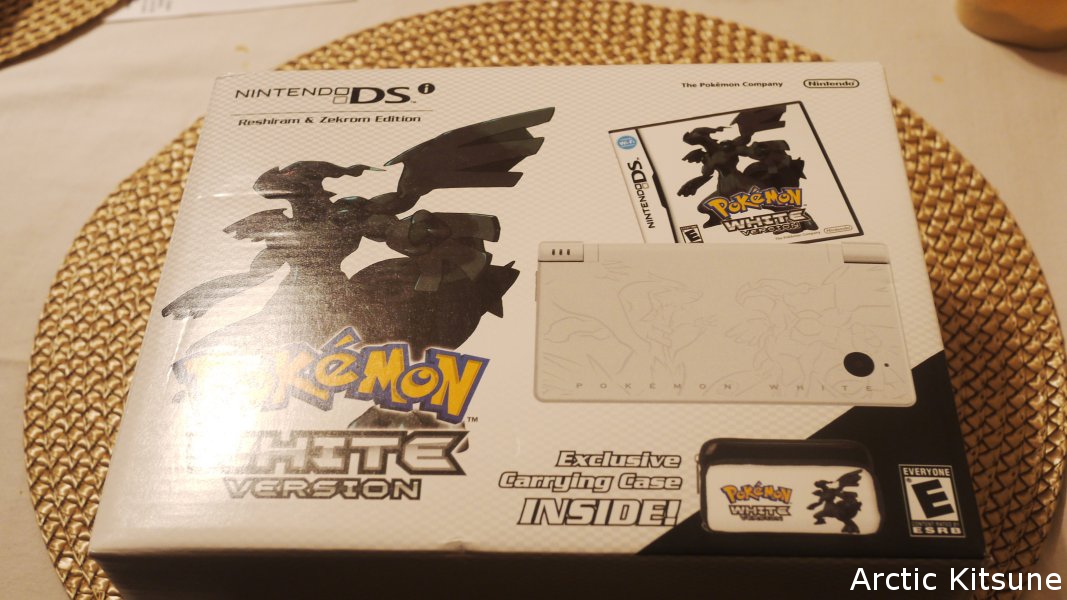 (All images taken with a Lumix GF1 – Pancake lens over multiple days.)

Being one of the numerous original Pokemon veterans, I snapped/caved in purchasing this after a long haitus. As mentioned, I played Pokemon Red, Blue, Yellow, Gold, Silver, and Crystal on original Gameboy (stolen), Gameboy Color, and Gameboy Advance. If that wasn’t enough, I also played on the kick-ass Pokemon Stadium & Pokemon Stadium 2 on Nintendo 64.Â  I purchased this just to see what changed, what makes it so special, and to both Victini and, Zorua.

So why did I purchase the White Version? Because of my blog theme of being white, for my blog mascot – Varkitsu, for Zorua, and for the accident of finding out it has the “White Tree” for catching first-gen Pokemon. 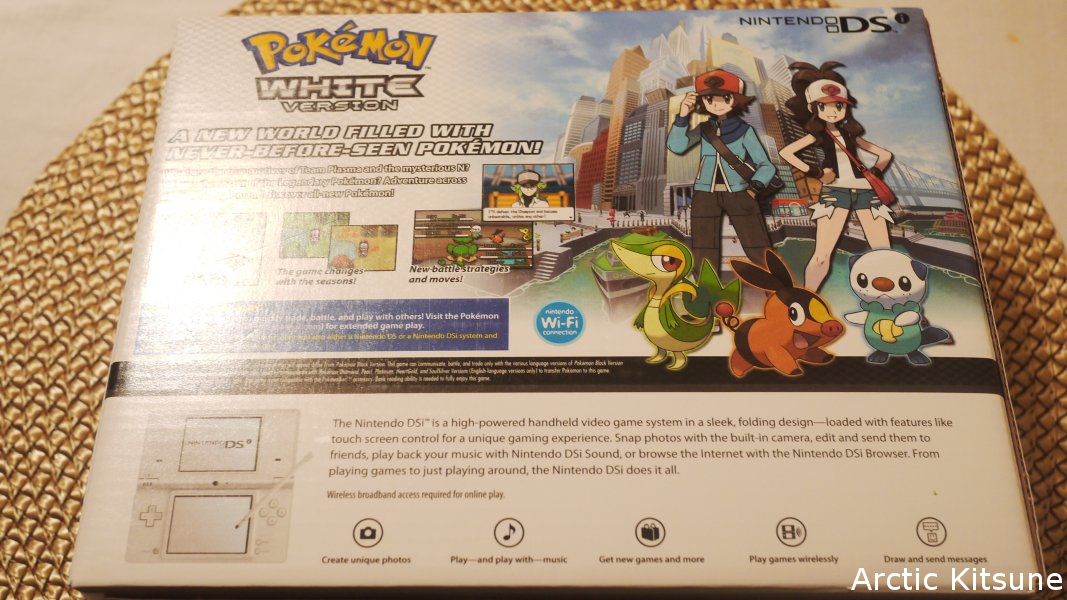 (Link – MySite) – This box was a *BEEP* to open up with it’s heavily glued flaps. It felt like breaking into a vehicle with how much force it needed to open up. 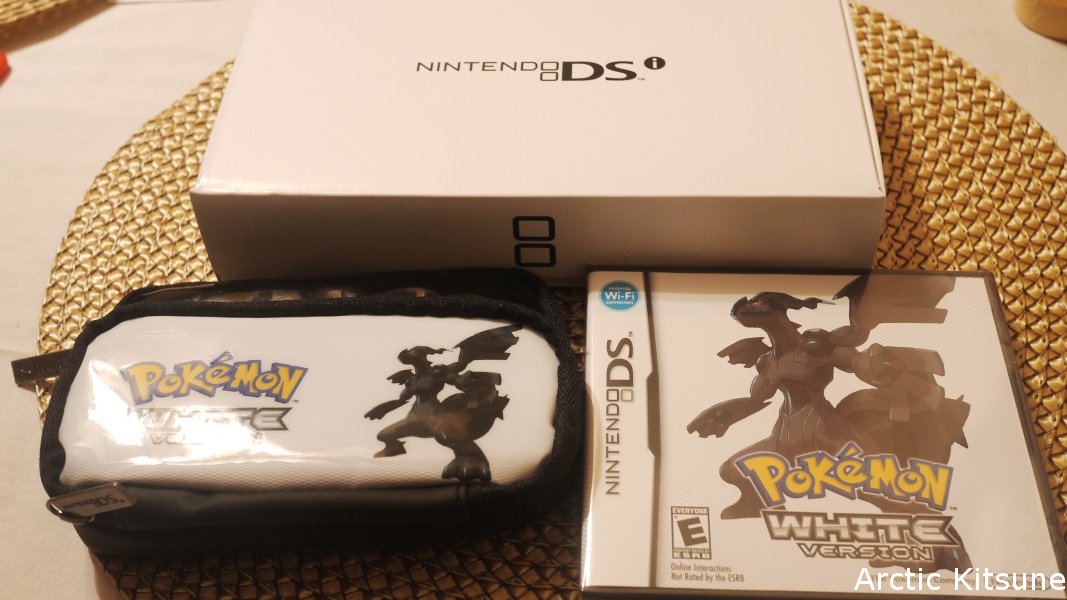 (Link – MySite) – You get a Nintendo DSi, an exclusive case, and the game itself. It’s alright. 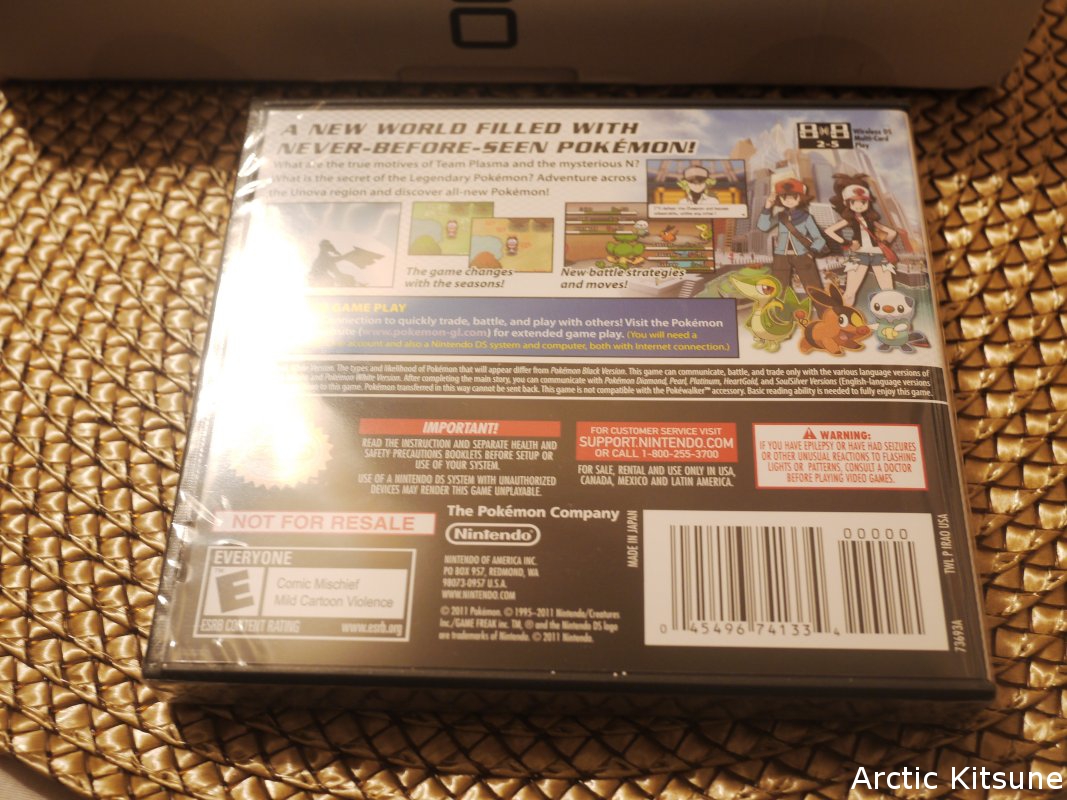 I lost track of Nintendo’s Gameboy progress after the GameBoy Advance. I stopped and moved on once I semi-completed Crystal with all my legendary & non-legendary Pokemon all on that Crystal version. I apparently made those I know in Europe jealous, shocked, or astounded with the amount I caught. They had about half of what I caught. Anyways, I’m here to review the game, not go on nostalgia road *slaps self*.

The DSi is actually perfect for me as I don’t need anything overly special. I just need something to play Pokemon White, with the image and voice being a nice bonus to the whole thing. Maybe when I’m randomly traveling about this or another city without a camera (highly unlikely) I could just whip this DSi out and snap images with ease. Recording sound is also interesting on this thing. Internet? It’s alright. It’s slow when I first tried, but it’s actually semi-useful. That’s enough for me really. 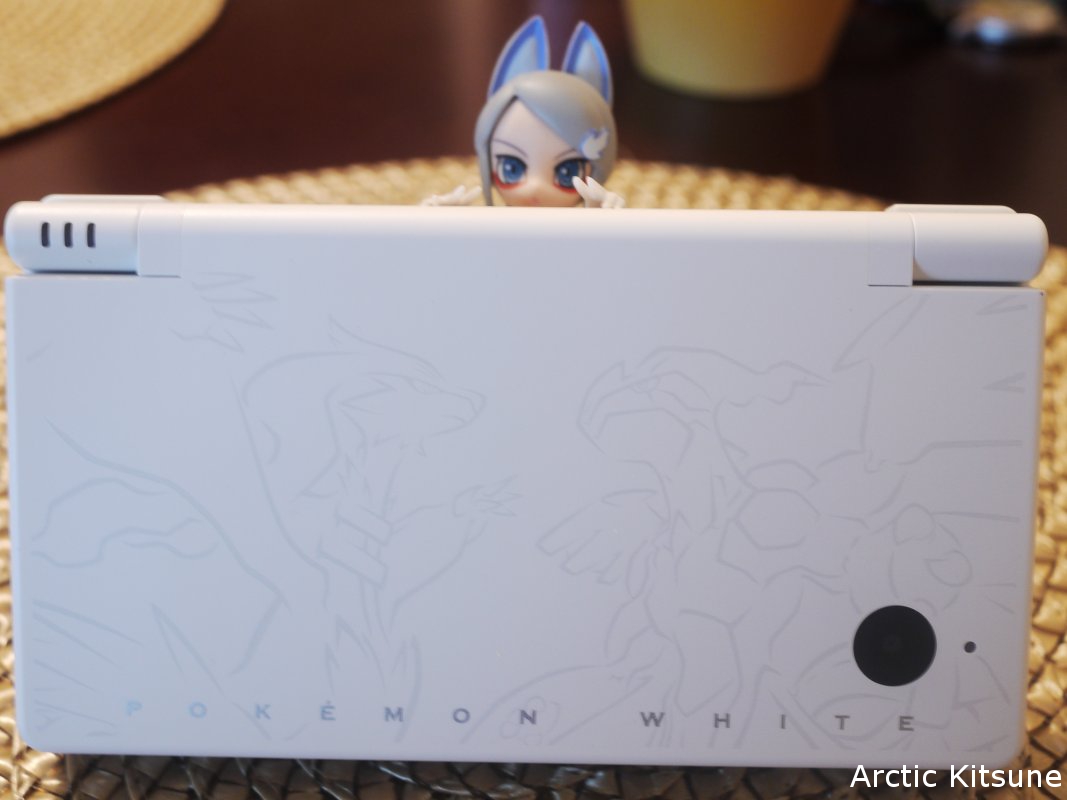 (Link – MySite) – Renge gets her own white DSI – Peakaboo!

– Sidenote: Also reviewed this on Japanese’s White Day – Where guys return more expensive gifts to girls/ladies/females from Valentines Day. It’ll say 13 on my article but Japan is 1 day ahead. By the time you’ll read this it’ll be (or past) March 14th. Yes, I gifted Renge Pokemon White. Renge cave me Lindt Choco & Cocoa beans while I gave her Poke White. 😛 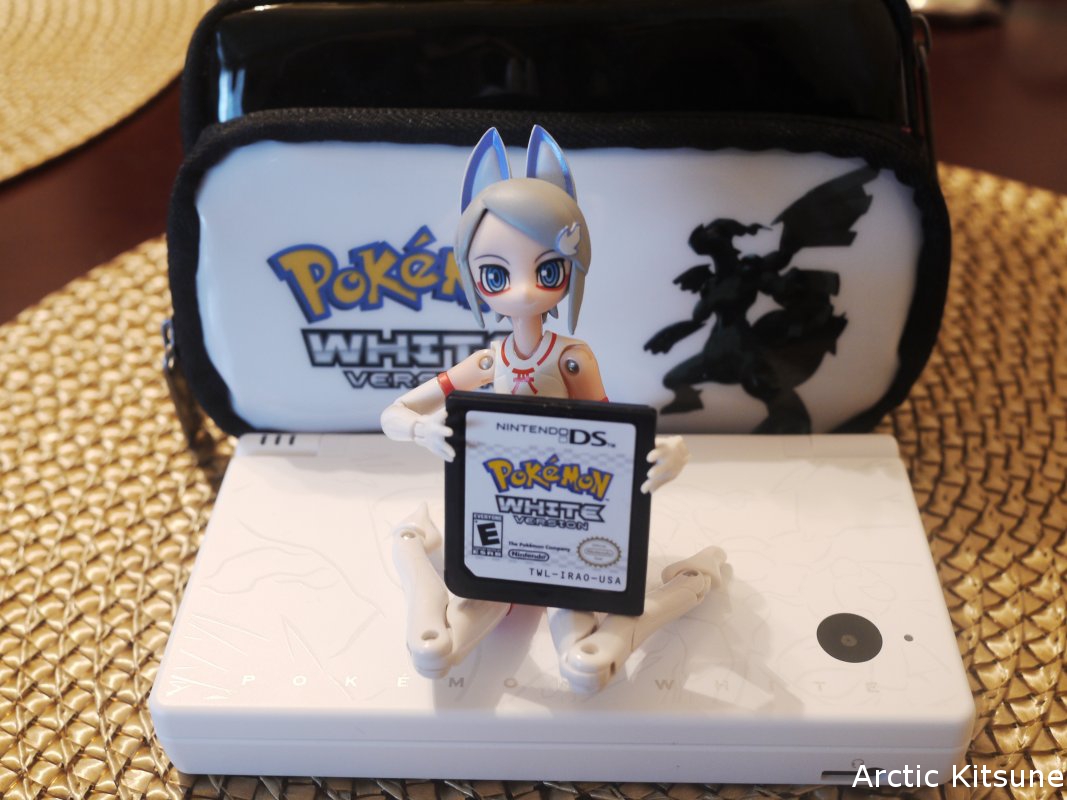 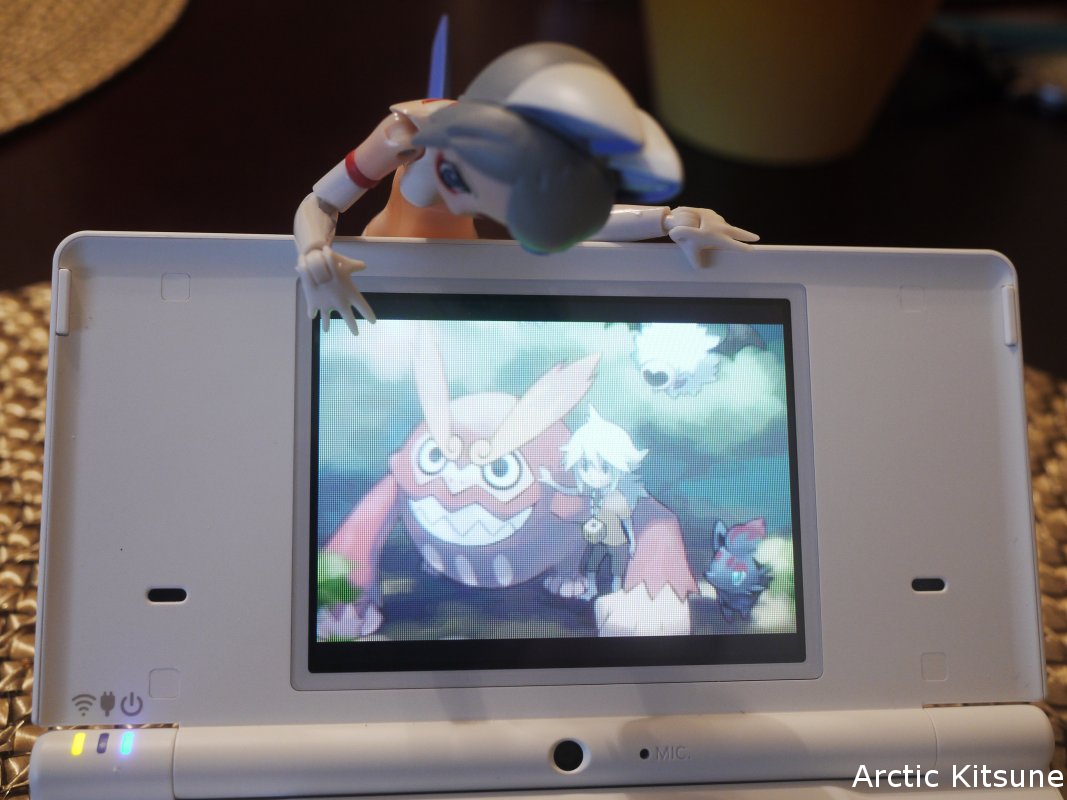 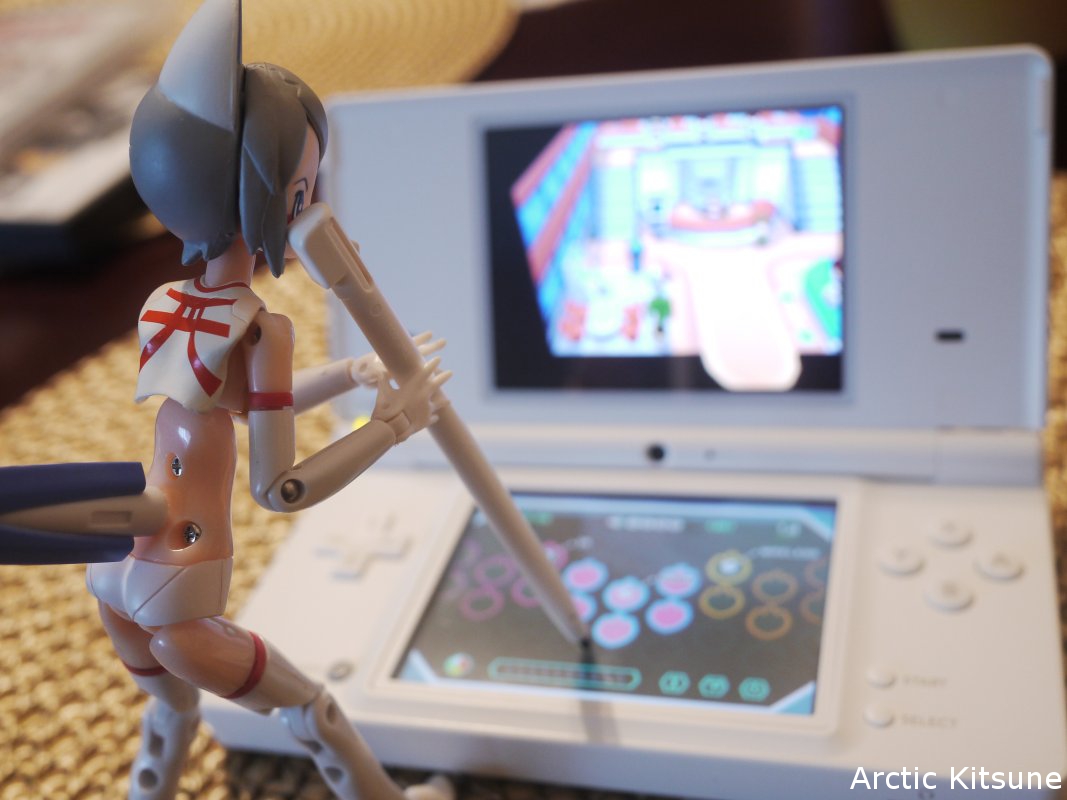 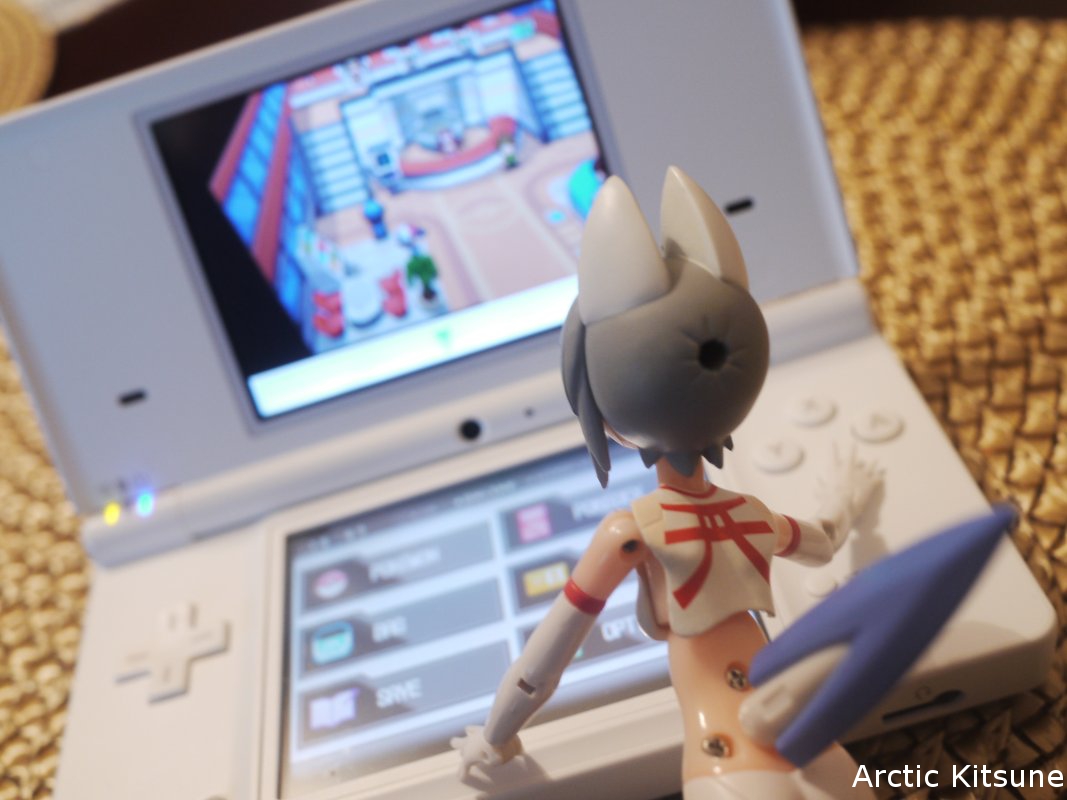 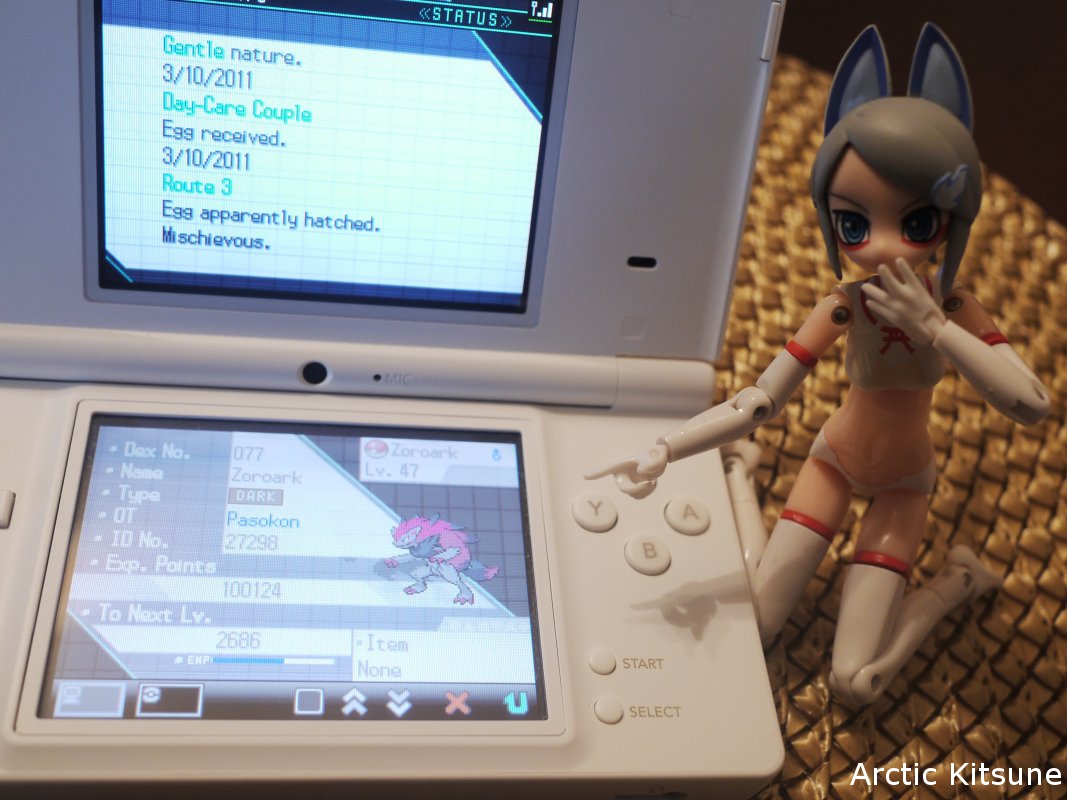 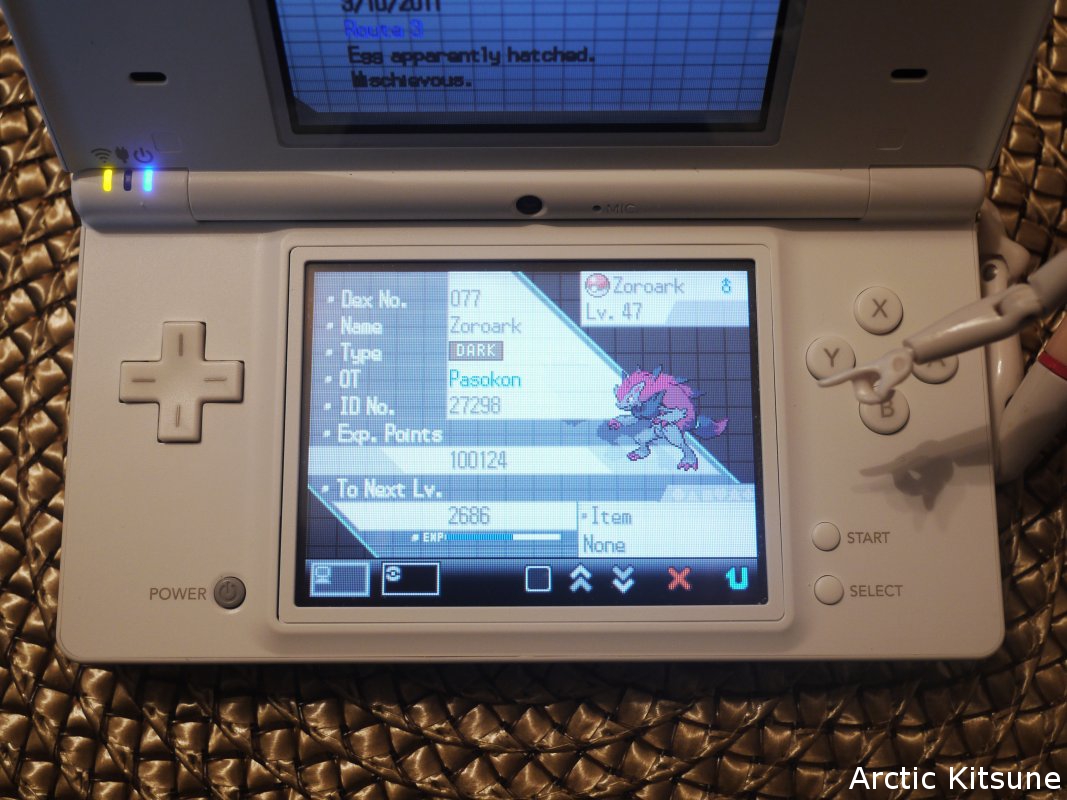 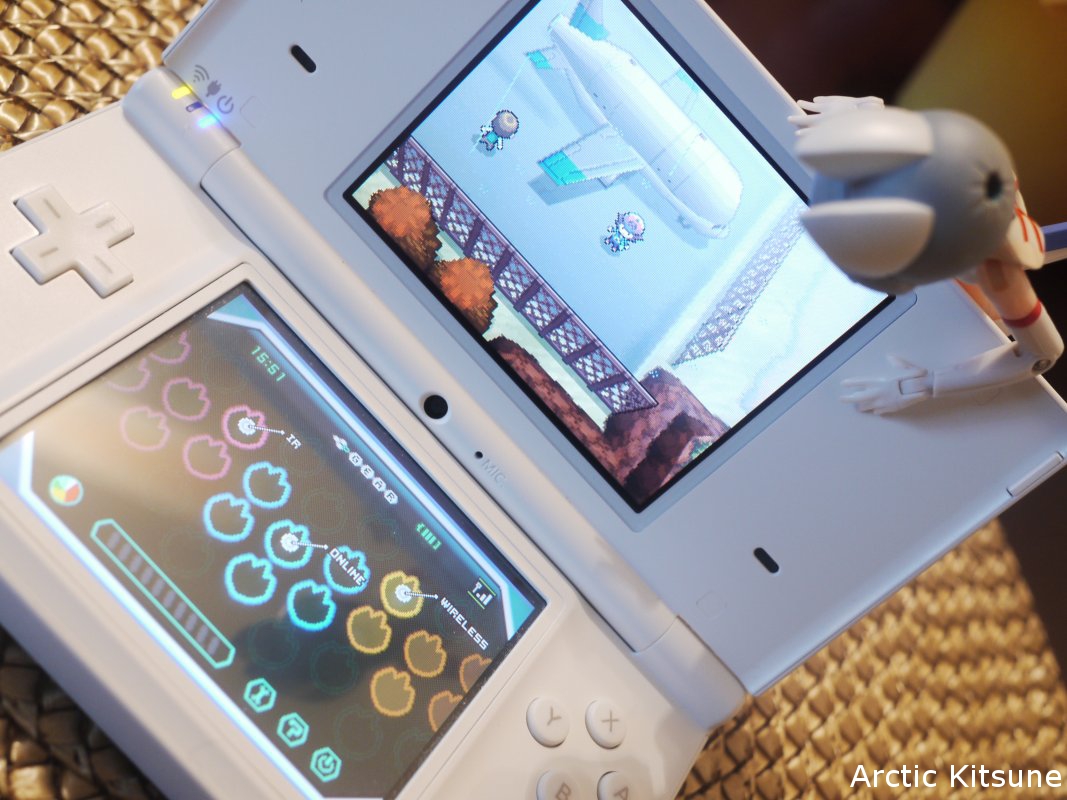 The game takes place in a region called Unova. Similar to previous games being based on Japanese region & culture, this one takes New York and Pokemon’fies it into it’s own Japanese culture. It doesn’t assimilate, but does a “what-if” of it’s own culture with the New York area.

– Castelia city – It’s the main hub and the “New York” of the Pokemon world. You’ll see salary workers rushing from one area to the next while forming lines for an ice cream shop, just like Japan! Everything you need maybe found here.

So how does this region fair when compared to previous gens? It takes an already used map template from previous gen and changes the scenery while paying a bit of tribute to the past versions; Everything being upgraded of course.You can see the 8 typical gyms, alternate landmarks, the Elite Four, trainer types, and the Pokemon that would generally spawn in such regions. It’s the same, yet very different. Veterans would know what I’m trying to say, hopefully.

The one thing I was looking forward to was venturing back into the previous gen’s world. Why? Ever since Gold/Silver/Crystal, Game Freak (those that made the game) turned it into a “tradition” where you could venture back to the previous world to see what changed. Instead, we get welcomed with a feature called “Dream World”. The Dream World brings one Pokemon into a dream for 1 hour where you grow berries, play mini-games, and even catch uncapturable Pokemon in B&W. Though, I read you get a 50 Pokemon transfer cap which kinda ticks me off. 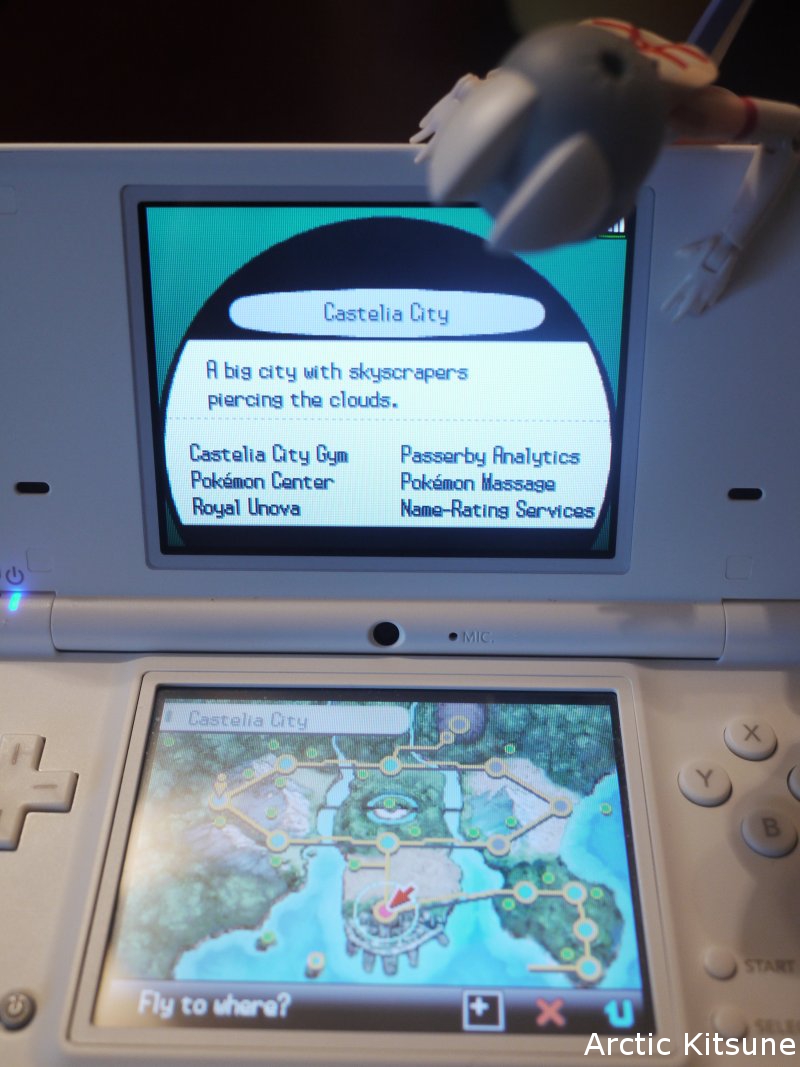 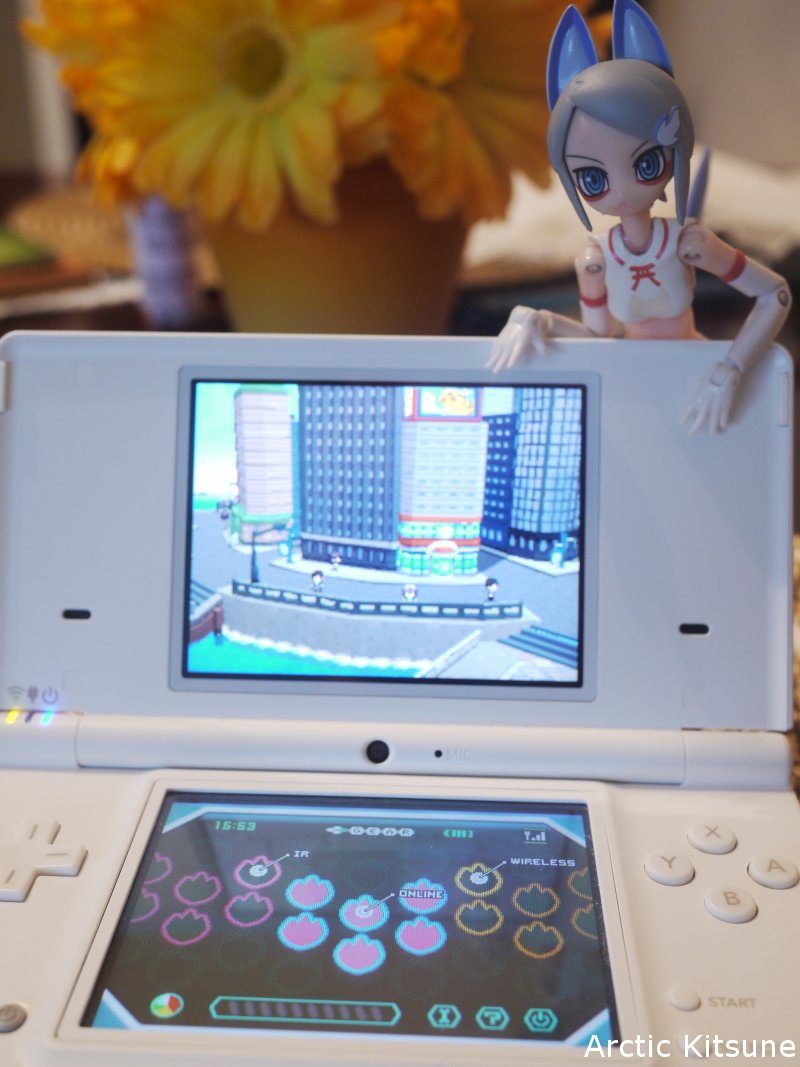 All boats leading to and from Castelia may be found at the southern docks. The western most dock leads to Unity Tower, the middle to an island holding a lighthouse tower instead of Statue of Liberty (holds Victini), and the right most for a battle ferry ride.

Unity Tower? The more you interect with others from various nations the more national rooms you’ll open up in the UN-esque tower. Instead of politics, you’ll meet trainers you traded with from across the globe in NPC form. They’ll speak from the survey you filled out. I traded with PersocomÂ  which unlocked an American floor in my version. Anybody from Slovakia or Japan wanting to trade?

Victini?Â  is an event Pokemon which you’ll need to download a ticket to get (until mid-April ’11) from Nintendi Wi-fi. Taking the western most boat (Castelia city), you’ll arrive at a Team Plasma held island where you could tame Victini for yourselves. Because Victini is a rare Pokemon, s/he is a pain to obtain. I’ll recommend using Great or Ultra balls to catch it. Maybe take about 30 balls and save before you try so you can keep retrying without leeching away your funds. This little bugger is a welcomed addition to my Pokemon team; a leader. 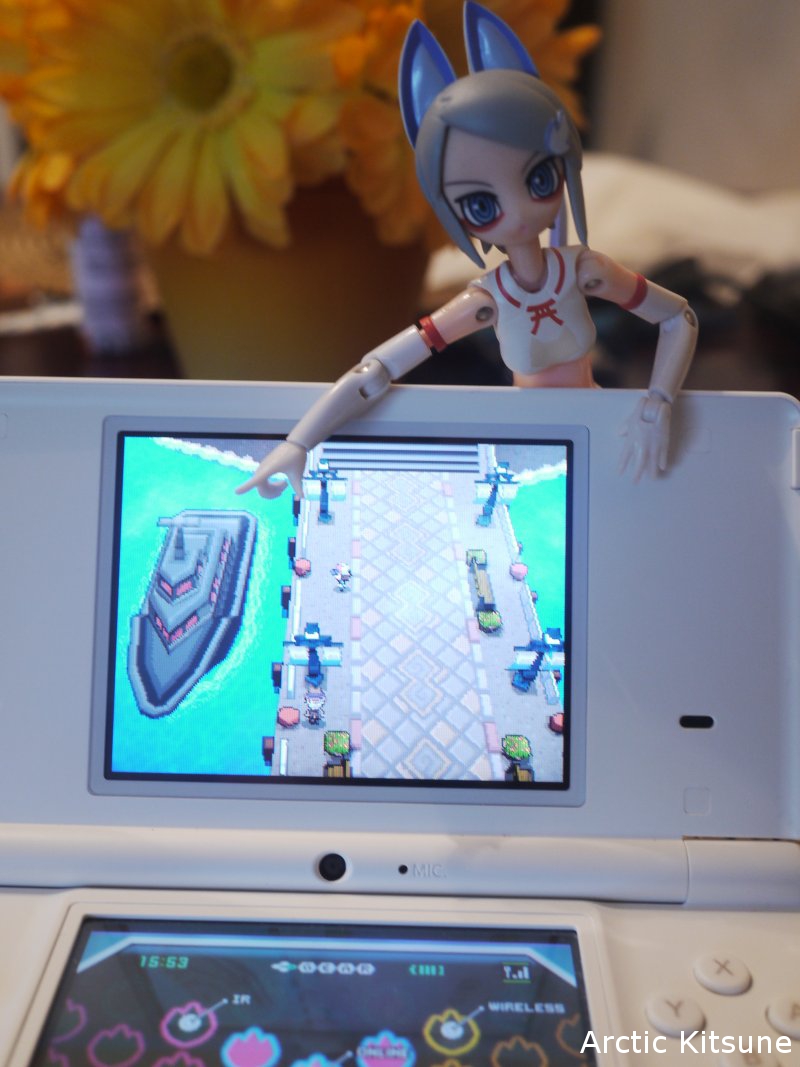 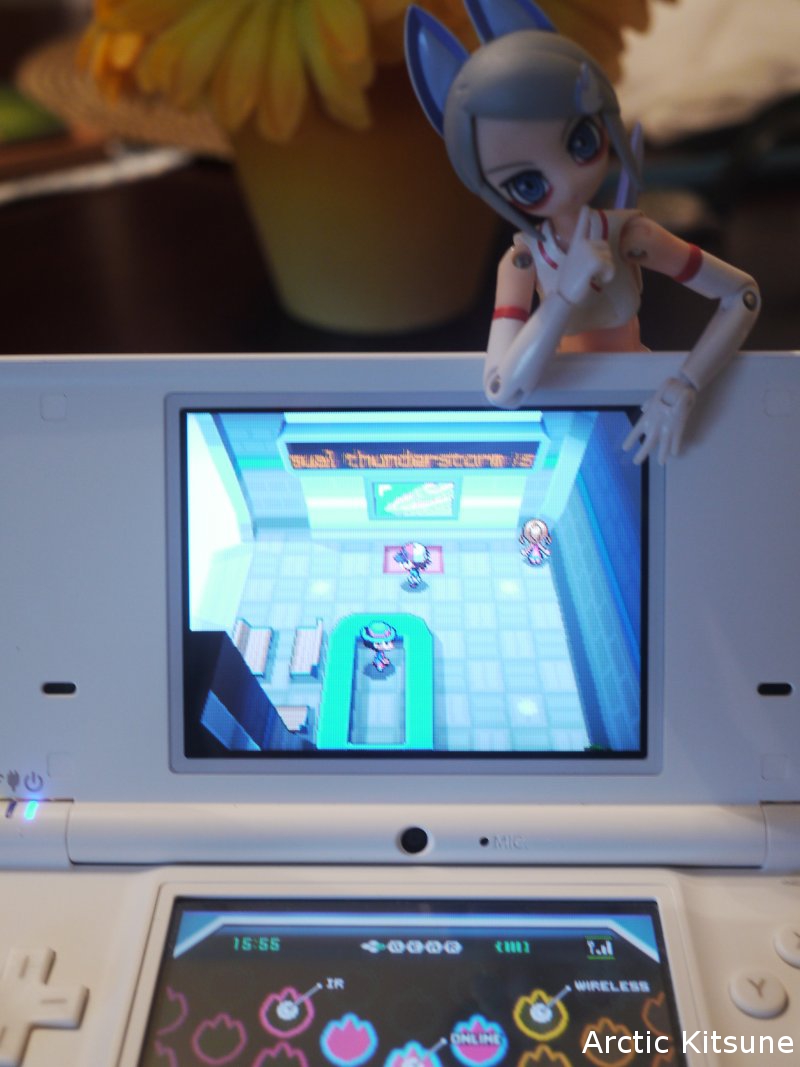 – Renge: Mastah, why is that boat grey? Can we travel somewhere as well?
– Me: Hmm, must be under maintenance within the game. But sure, let me unlock a chance 🙂
– Renge: Humu! Heavy thunderstorms!
– Me: Ah! Don’t worry, that’s just ingame weather! It will be awhile before we get such :). 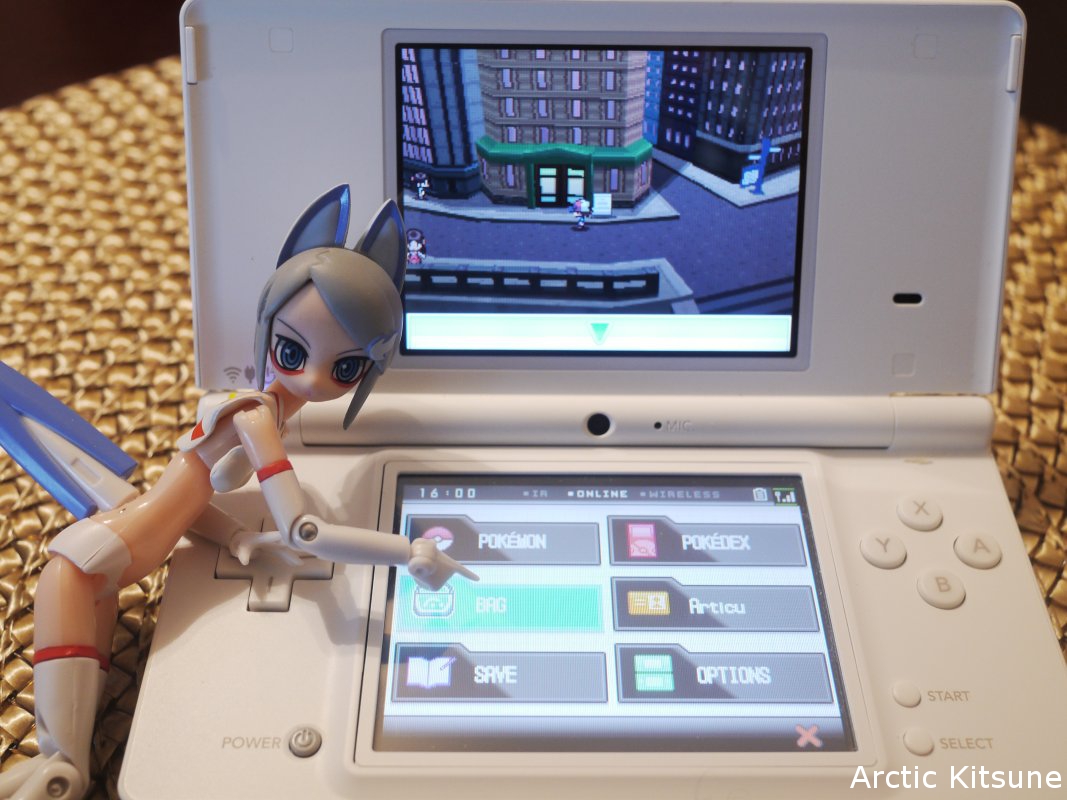 (Link – MySite) – Renge: Mastah? What does this button do? 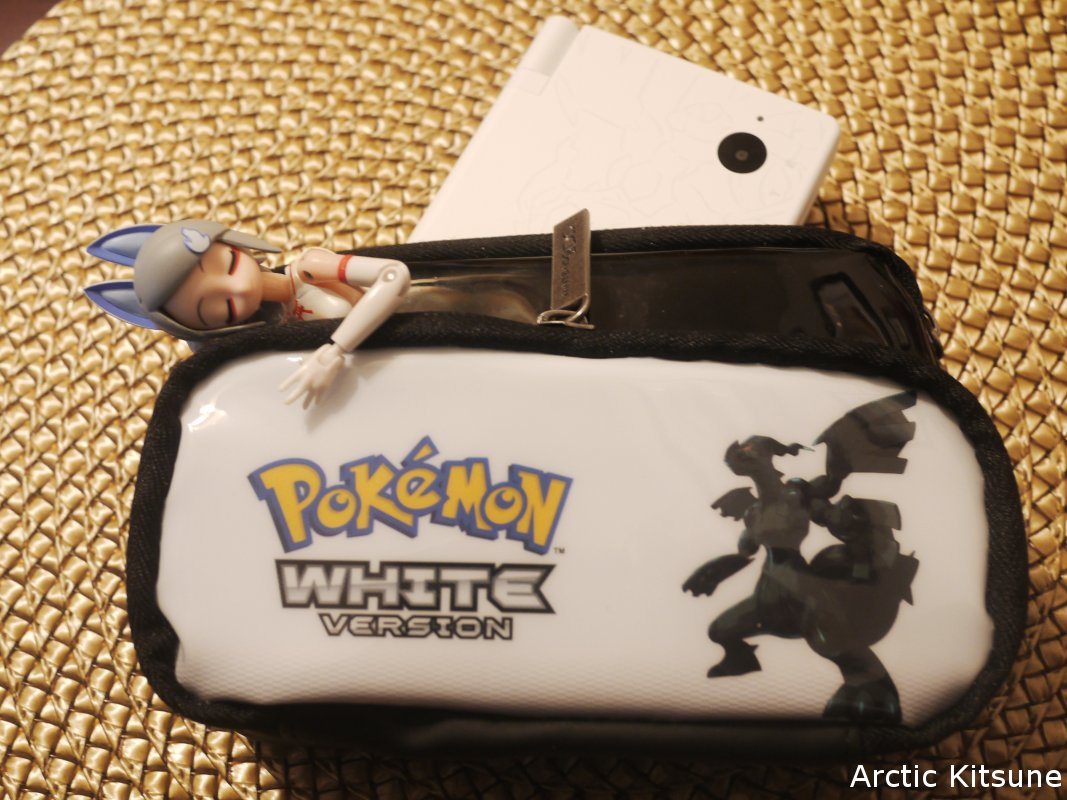 (Link – MySite) – Hmm, that button put both you and the DS to sleep O.O 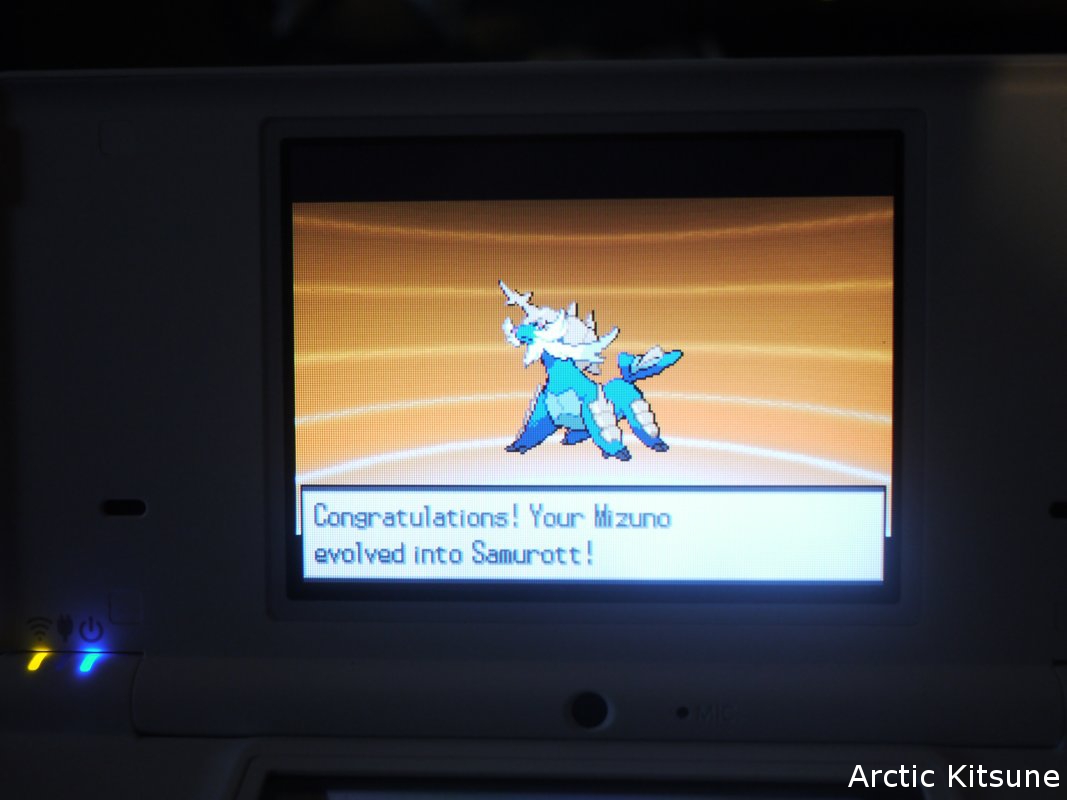 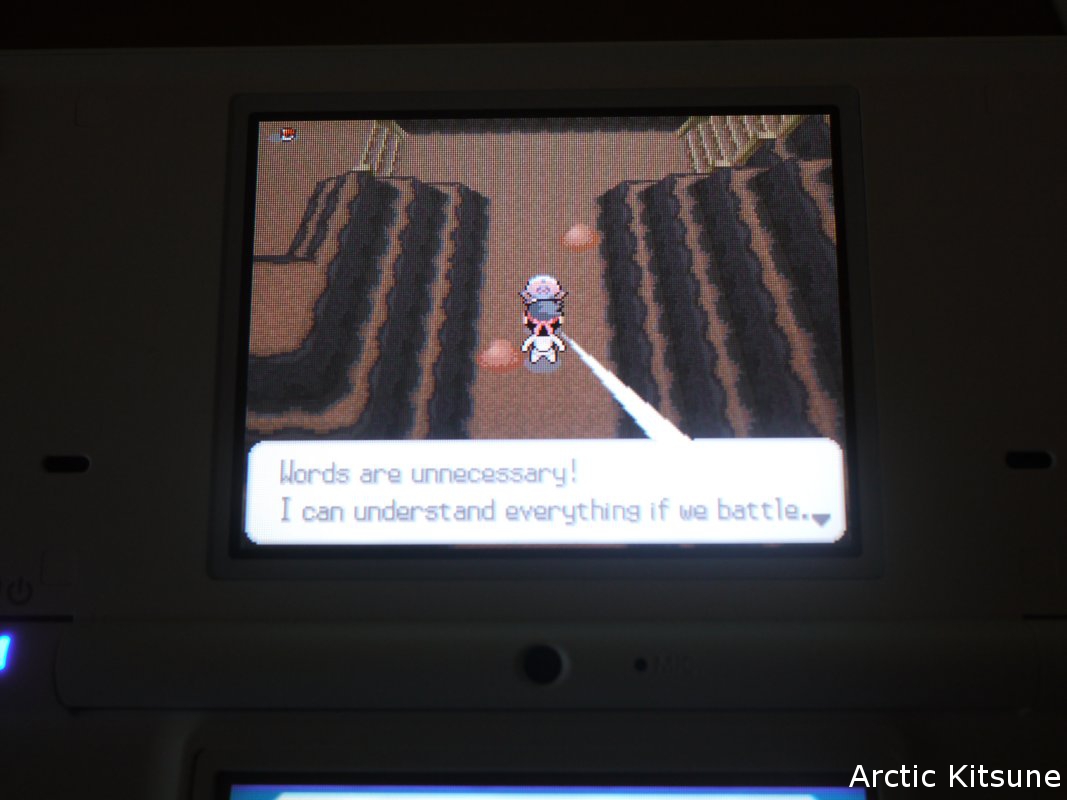 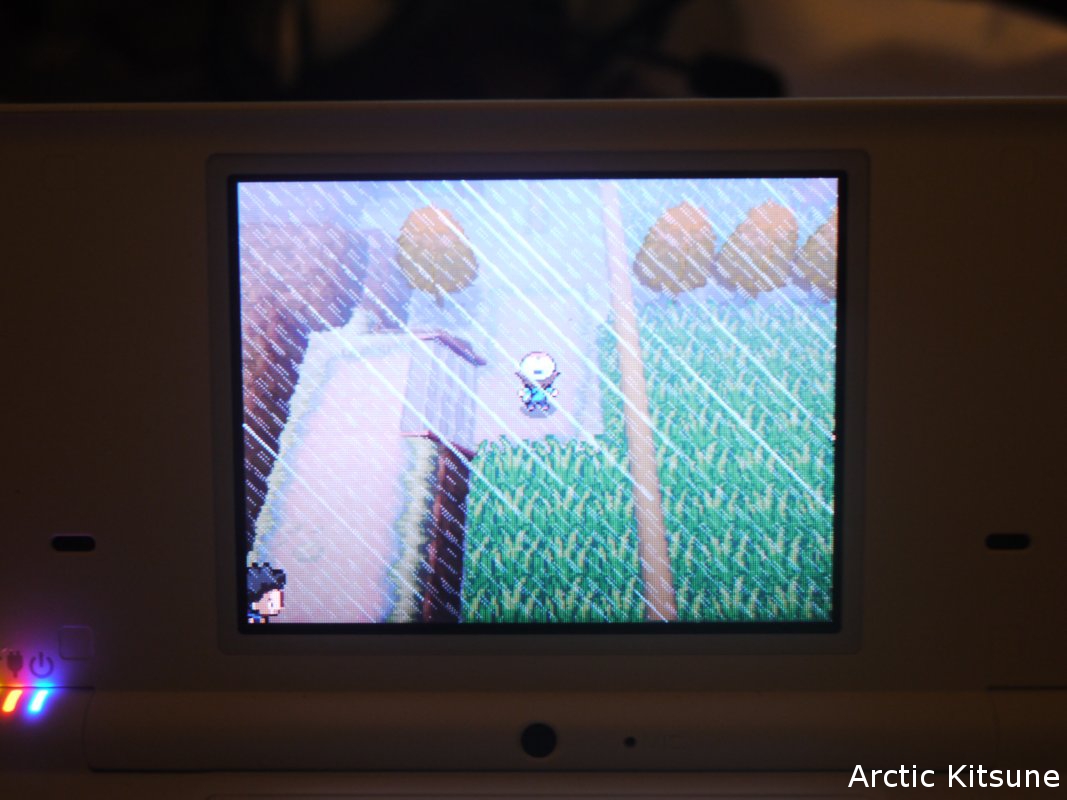 (Link – MySite) – That’s quite a thunderstorm! 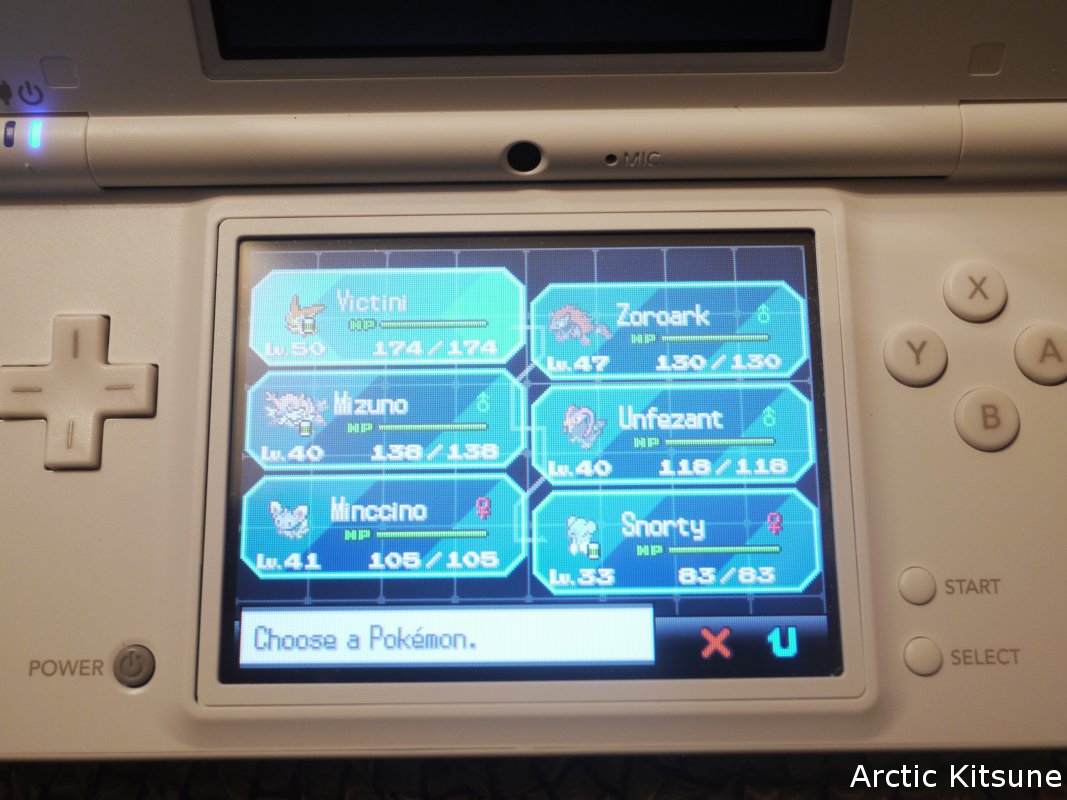 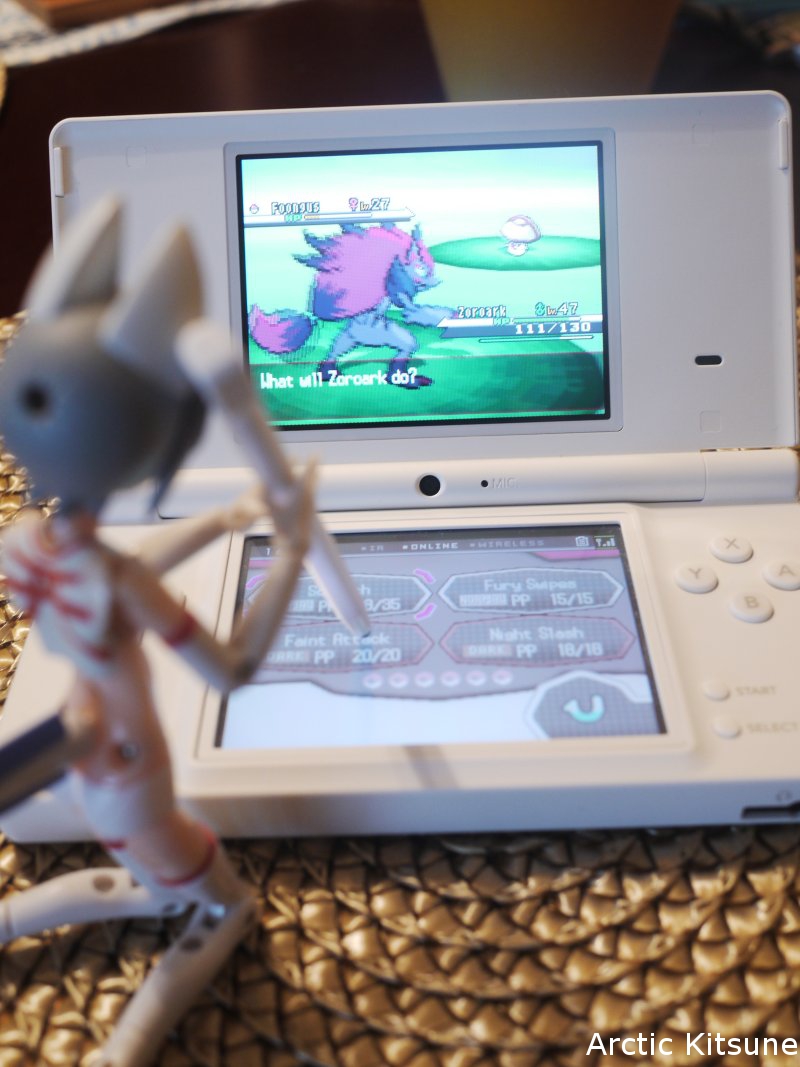 This was worth the purchase. A bit pricey, but was worth it. If you haven’t been fatigued by the graduallyÂ  improving remakes then this game will entertain you for a while. If you’re there for the story then you can finish it on the weekend, two weekends, or on a nice long March break. The story is well done, as expected by Game Freak, keeping you hooked in the game. As someone who bought this for nostalgia, it managed toÂ  welcome me back very nicely. I saw the old mixed with the new while other features left me a bit disappointed. I highly recommend B&W for those thinking of obtaining it for the first time or for nostalgia. Though, it’s a game with obvious pro’s and cons. It’s your choice in the end.

The one thing I would like to recommend to Game Freak is to use real world weather. It could borrow weather stats from a long-term reliable weather station, or to make up it’s own weather patterns. Similar to Flight Sim’s weather updater, this game needs to use such. It shouldn’t be that hard as they already got the weather bits in now. A simple game patch would do, if possible.

– Adds many new features like extralink, Dream world, wi-fi wireless battles & trade, and unity tower.
– Event Pokemon adds to the Pokemon re-playability with Zorua & Victini.
– The story is enjoyable, similar to previous gens. The story keeps you hooked and gives you a purpose until you defeat Elite Four where you’re free to roam about as you desire.
– Music is very well composed and sounds very traditional, yet new.
– Battles are fun. The double and triple battles make for a nice twist.
– Wireless trades and battles makes things far more efficient than looking locally for semi-non existent trainers. Trading or battling puts nations into Unity Tower.
– Pokemon Musical was a nice touch to those bored of battles. Enter in a Pokemon and try to win in a musical show.
– The weather and season is a nice addition. You get seasoned Pokemon that appear more, or have their appearances change during that time.
– The Day & night cycle was expanded on visually with dawn, day, dusk, and night time.
– There is actually a bunch of new-gen Pokemon that I’m willing to tame. They appeared repulsive, but I’m gradually growing a liking to them.

– Dream world itself where you bring dream material into “reality”.
– Battle railway – PVP battling in subways (think JR lines in Japan or New York’s Metro system with Pokemon on it).

– Weather system is a bit generic. It only uses preset weather patterns. It changes, but only every month per ingame season.
– I’ve read somewhere that you can only transfer up to 50 pokemon into the dream world. I don’t know how that would be read but I’ll assume that you can only bring 50 into your Poke-version. 50? People will only look for legendary types while only trading main Pokemon from past generations.
– The rehashes are getting brutally noticeable. It’s nice, but need to push it to the max at least.
– The night time period was degraded A LOT! Night time is much brighter than I remembered in Crystal, and Hoothoot no longer appears, nor it’s counterpart. If you have Day and night cycles then you need night time Pokemon!
– Pokemon White and the “extralink” requires you to know someone locally to add or re-add someone into the Black/White sections – White Forest or Black City. There isn’t much you can do if you don’t know anybody.

I’m off to turn Pokemon White into my main gaming hub for Pokemon up until the DS jump ships into something other.

PS: If you want Zoroark or a place in Unity Tower then I’m willing to trade. Just be civil/polite, don’t disappear on me, and poke me either on here or on my twitter: http://twitter.com/#!/Arctic_Kitsune . I’ll be needing time to get around to breeding and to get to the White Tree though 🙂