Kon! Kon! Because it’s March, an epic one at that, we’ll have a “kitsune” themed top seven. When March is epic we need some lovely fox spirits to accompany the epicness of it! If you’re a “kitsune” minion then these should interest those viewing Anime relating to fox spirits, foxes, or wolves using similar traits to fox myths/folklore. Now lets see the slyness of our foxy friends! These are the ones I chose as the best for this month 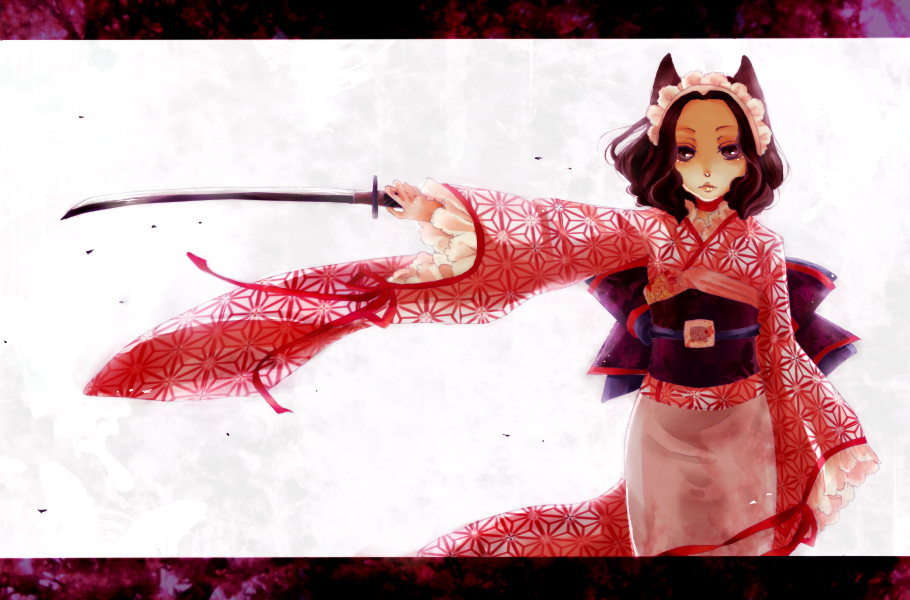 (All images taken from safebooru. Trying to give credit to artists work when possible and shall only use when I can link back.)

For those wondering why I’m being a “furry”, or highly interested in “Kitsunes” may want to click on the “Varkitsu” link on the right-hand side of the screen (—->). Not trying to be a furry, but one who simply likes the elegant side of fox, wolf, and cat spirits in Japanese folk’. Though, I will mention in short that I like “kitsunes” for their comical attributes, their shape-shifting, their slyness, their personality, and the way they mess around. Up for a round of Sake? 🙂

I have two shows that shall be re-mentioned due to it’s greatness, or as I find them great. I shall simply quote what I said back then. 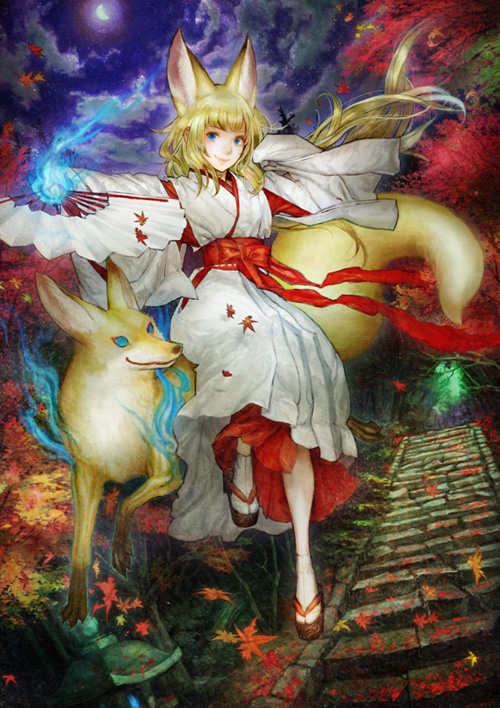 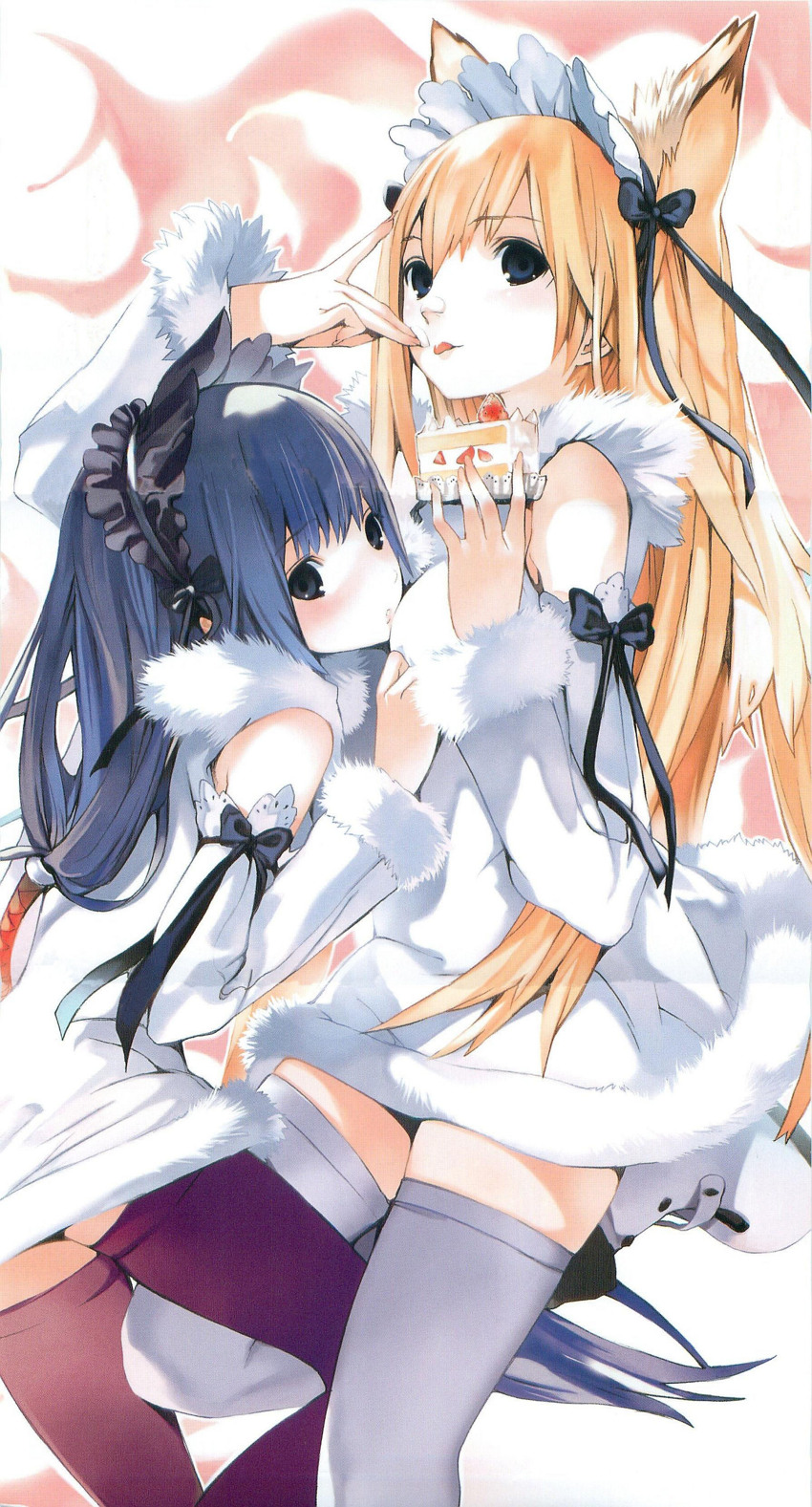 Wagaya no Oinari-Sama is about a fox spirit named Tenko Kuugen who ends up guarding Toru and Noboru. The two are siblings born under the water shrine with Toru being targeted by demons forcing Tenko to guard him. Many comical and serious happenings occur throughout the story. The story is somewhat light, but still worthy to be watched at least once without dropping!

This Anime also influenced me into taking an interest in fox spirits, hence the Arctic Kitsune name on my blog and the blog mascot – Varkitsu. The second ED of the show is my personal favorite as it combines summer, ‘matsuri’ and the playfulness of foxes.

2) Spice & Wolf:
(Is actually a Wolf. Her abilities are similar to those of Fox spirits found in Japan.)

(I’m used to the Japanese voices with English subs.) 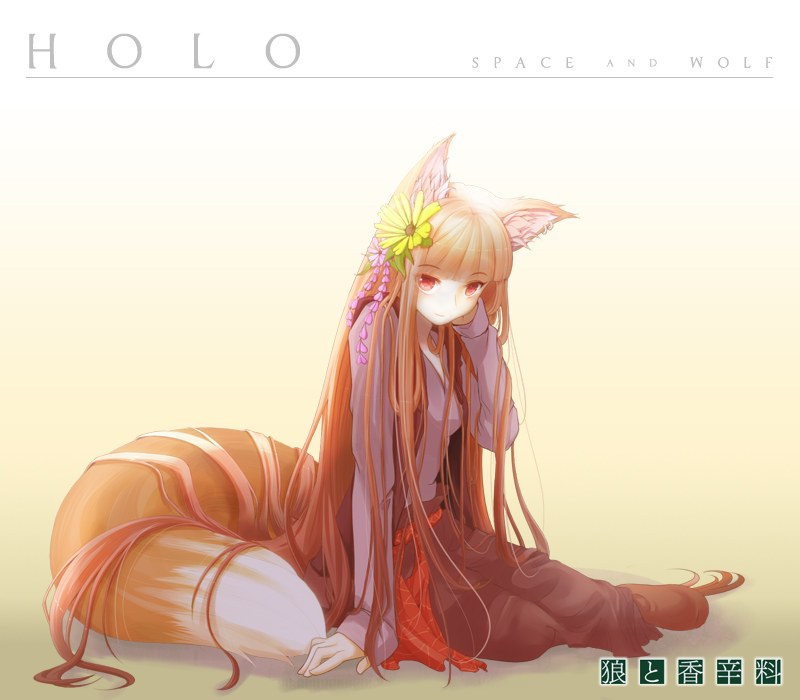 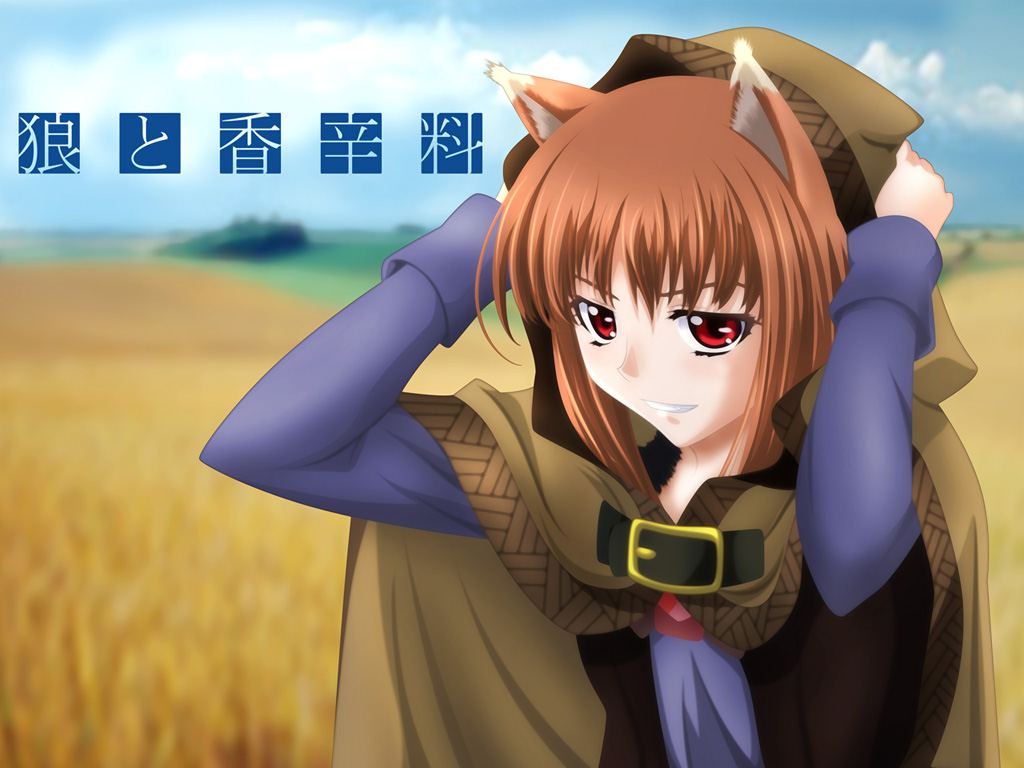 Spice & Wolf takes place during around the time of the Medievil age within the European continent. The show feautures Kraft Lawerance, a 25 year old peddler, and a wolf deity named Horo/Holo. Lawrence travels from town to town buying and trading various goods to gain a profit where he shockingly came across a gorgeous, highly intelligent, sly, and happy wolf named Horo/Holo. The two accompany one another as they both travel around various towns while taunting and teasing one another over every little matter. To add to this, they also get harassed by various traders and organizations within Europe. The two then must rely on their cunning and intelligence to wiggle their ways out from one incident from another.

Horo/Holo is a Wolf deity and a goddess who brings good harvest. Though, as time goes on, old pegan beliefs gradually becomes abandoned forcing Horo/Holo to entertain herself in various ways (not sexual) through fox spirit ways of cunning and playfulness. What helps drives the show is Holo’s personality. She’s a rank A (up there as the best) female character out there with the most unique of personalities, or so I believe. 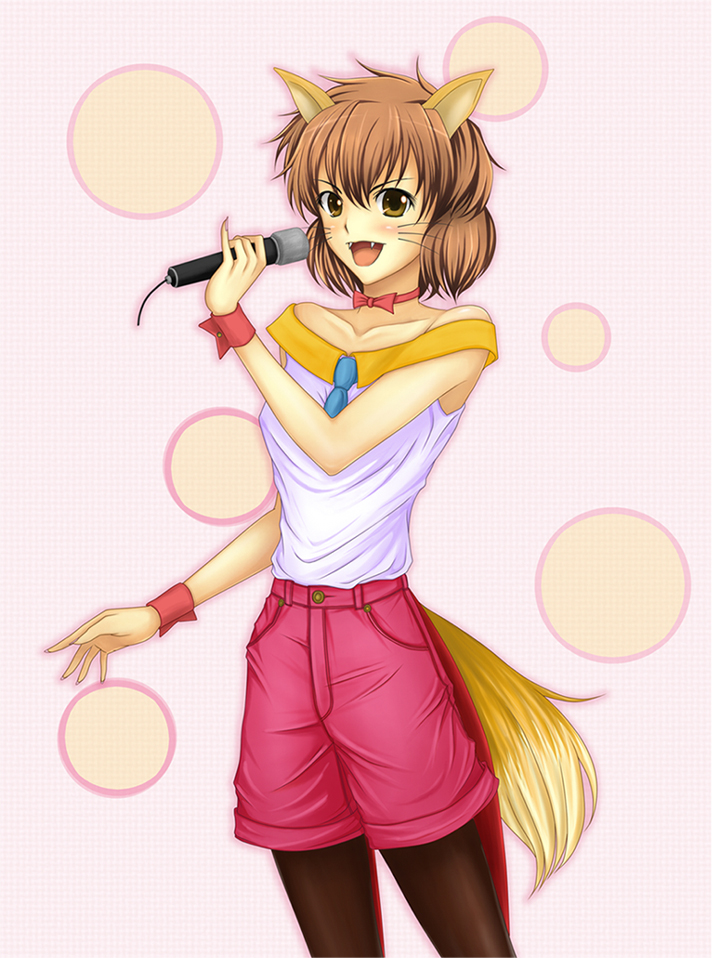 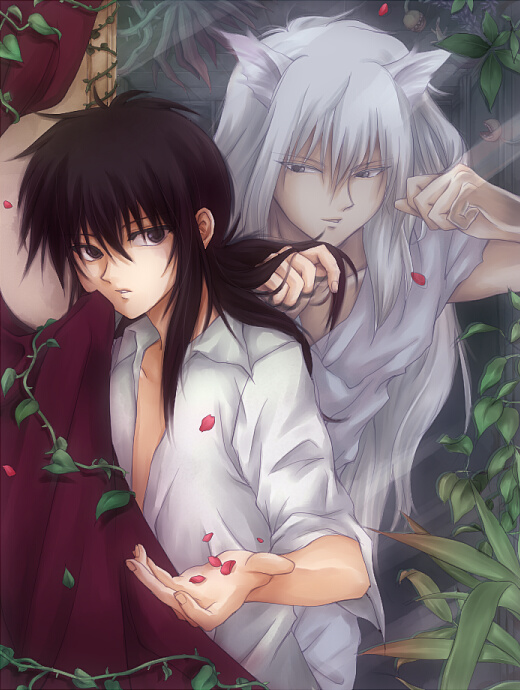 Is it better to be alive or dead? Are your friends, or those around you going to miss you once you perish, or are you fine with causing emotional pain to others? This show basically revolves around the living and the dead; the human world and the spirit; the humans interacting with the supernatural.

In short: Yusuke, a street punk, who views his surroundings as dull and boring while others think of him as social trash. Though, everybodyâ€™s views changes once Yusuke dies from a car crash while saving a child.Â  As this was unforseen, the spirit world left sent a Botan, a spirit messenegr, to accompany him while situations get sorted out. From there on he is tasked in becoming a â€œSpirit Detectiveâ€ in an attempt to regain his body, to regain his body to be with a loved one, and to return to those that actually missed him.

Alone? With other recruits that Yusuke defeated during his missions and with his close school pal.

Catch is, now he has to solve cases for the Spirit World by shutting down Demon Traders & Black Markets, enter a Dark Tournament, save his city, and even save his overly caring girlfriend, Keiko. Reality ainâ€™t all rainbows and unicorns, this Anime even shows that in itâ€™s dark tone. I also truthfully enjoyed how all fights went straight to the point. Those who had ill intentions gained back double the desired karma through bashing and/or humiliation. This show doesnâ€™t mess around.

Still not interested? It was ranked second behind the overly hyped Dragonball Z up until 2007-ish. I can also praise this show enough to be the king of all Animeâ€™s. Itâ€™ puts the majority of â€˜ecchiâ€™ Anime to shame that go for forced fan-service.
-> http://myanimelist.net/anime/392/Yu_Yu_Hakusho (For a better explaination)

Last note: Donâ€™t watch the Poltergeist Report movie unless you absolutely must. The dubbing is horrid in both English and Japanese *sighs*. 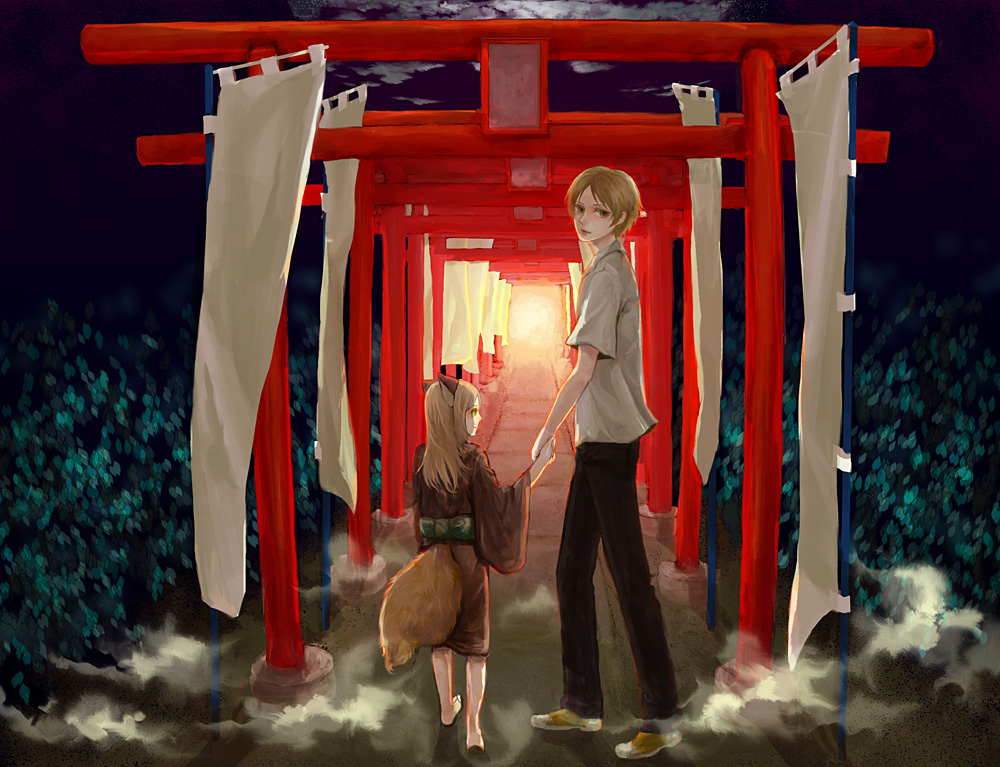 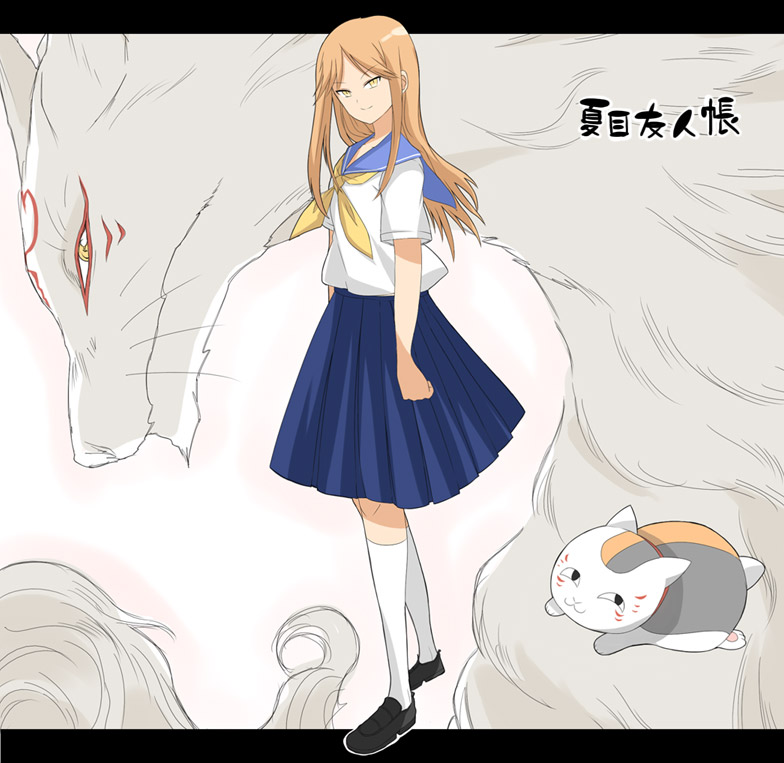 Natsume Takashi has the ability to see spirits. He also cherishes an old book he discovers containing numerous names belonging to various spirits around Japan wanting their name back both peacefully and by force. The book belongs to his deceased grandmother, Reiko. Due to this, a fox servant reluctantly comes to his aid in protection of obtaining the book after Natsume’s death. Him, and “Neko-sensai” venture around the world of Japanese spirits in a somewhat peaceful and calmed atmosphere.

The music and animation style compliment one another well. The animations are as expected for this kind of calm Anime. It may put off some leeming fans, or casual Otaku’s. Though, those that do manage to to complete this series will end up complimenting this show’s greatness, if not bias of it’s slow-paced storytelling.

(Fan-made trailer. Official ones get pulled for some stupid reason. Copyright? What an overly strict one; Hurt’s sales.) 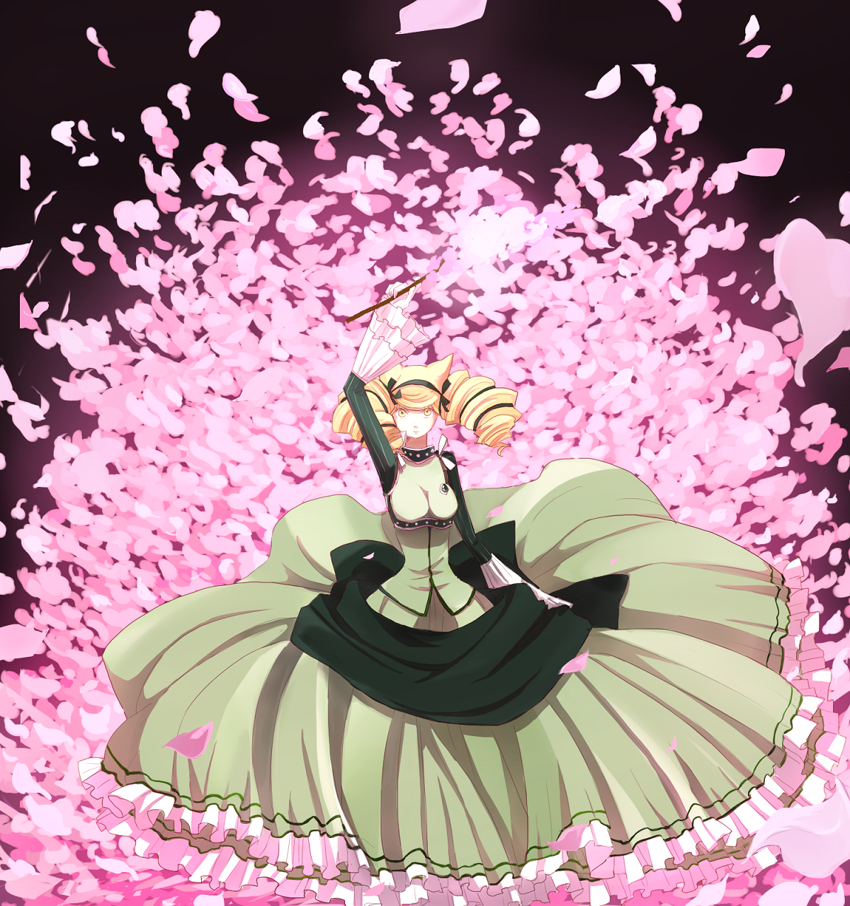 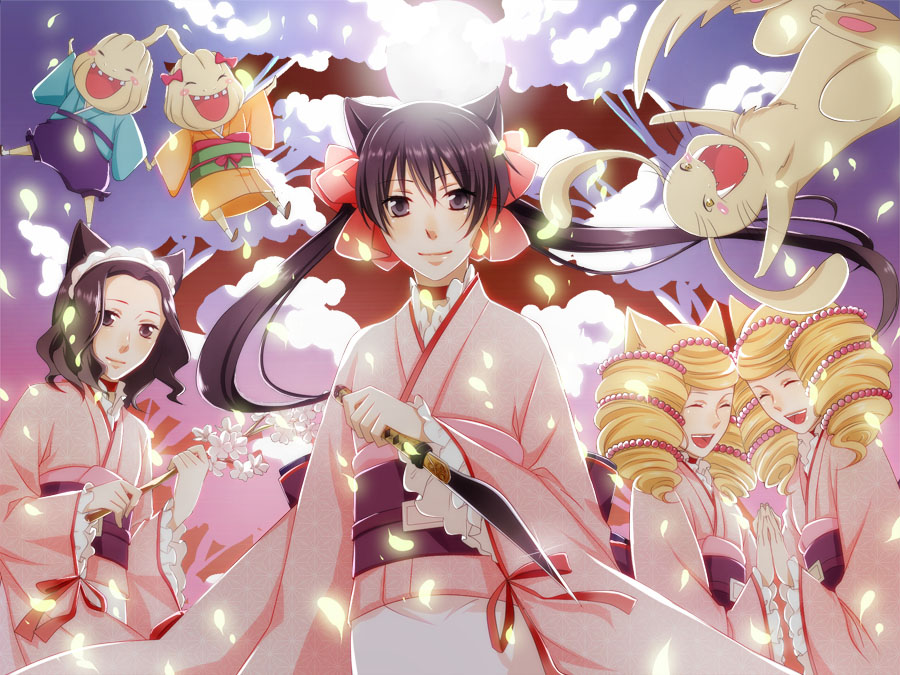 Humans and demons attempt to co-exist in an alternate Japan with growing westernization. Due to the troubles of co-existing, The Ministry of Spiritual Affairs attempts to harmonize the two groups. Lieutenants Kei Agemaki, Riken Yoshinokazura, and Ganryu Hanakiri are chosen to assist with this co-existing harmonization causing them to meet up with Zakuro, Susukihotaru, and Bonbori and Hozuki. The two groups go around on missions to assist with co-existing and to mend numerous issues within the semi-corrupted world of Japan.

This show was mainly aimed at the female audience while leaving a large enough gap and material for male viewers. Even though this show is aimed at females, numerous “serious” scenes can be seen which leave hooks to catch and to join up. There is enough romance/love storyÂ  to please both sides of the gender boat in this show. The music is also top notch on this, as proven with the pre-battle chanting that Zakuro’s friends tend to use to empower Zakuro with.Â  Also, you can notice a higher level of speech (royal-like) within Zakuro’s speech patterns before she battles. I believe this helps show the elegant side of the fox myths and folklores within the Japanese “Kitsune” mythology.

Zakuro will bewitch you if you do not choose to watch this! 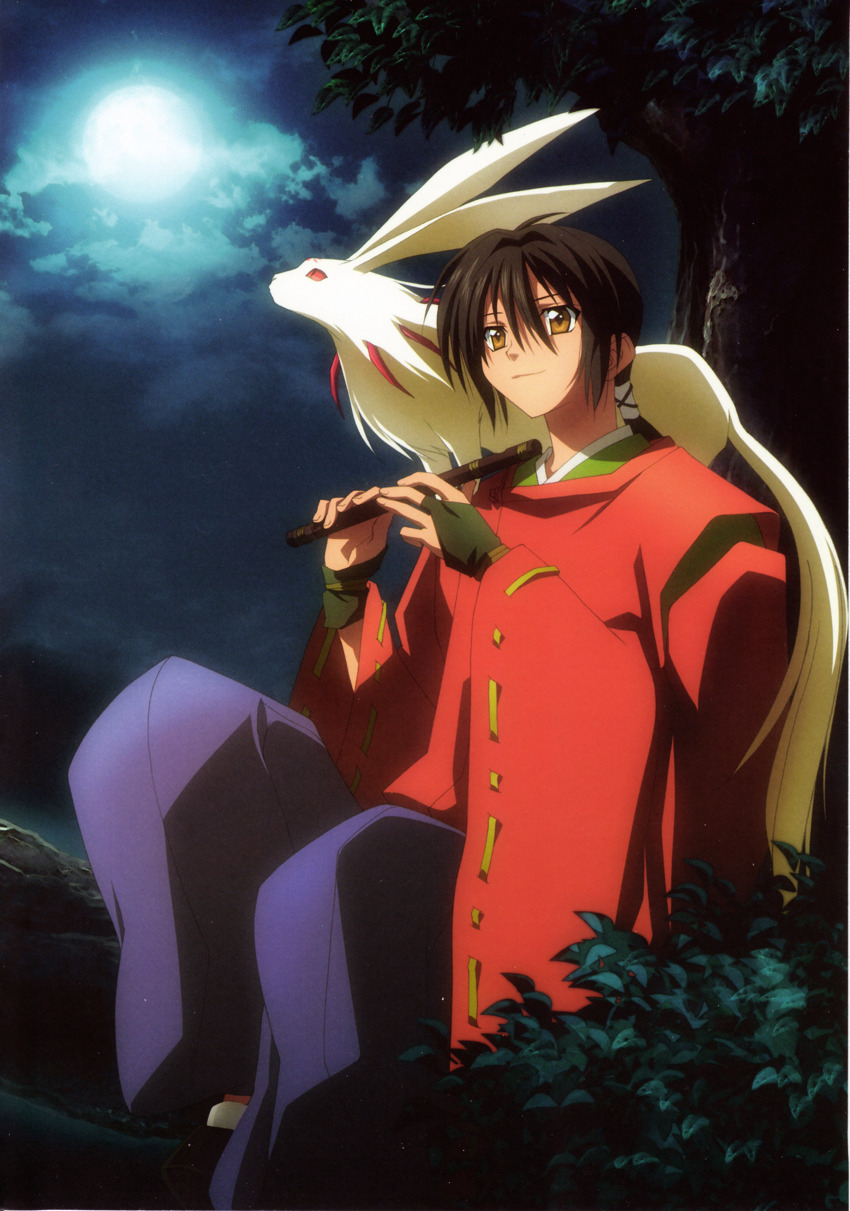 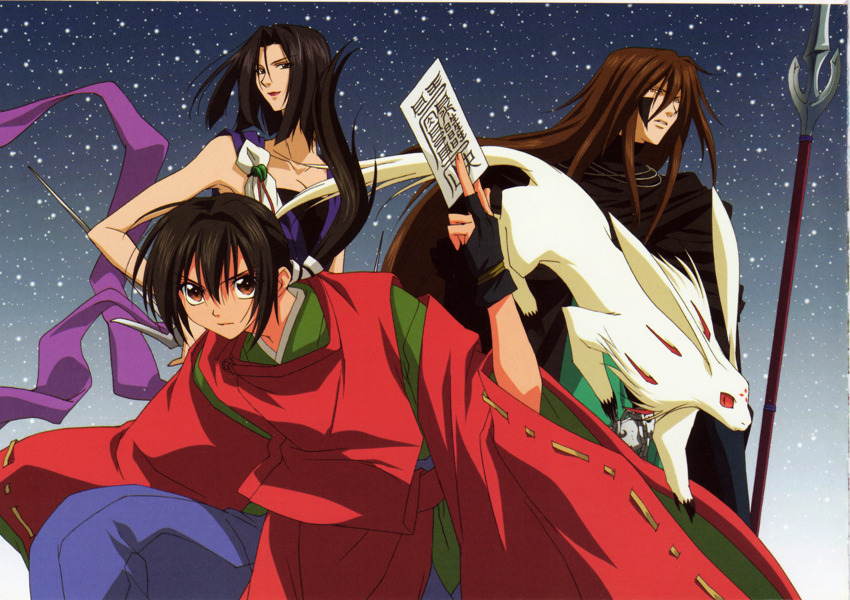 In the Heian period, Abe no Masahiro is the grandson of the great onmyÅji, Abe no Seimei. Seimei was one who passed his teachings onto Masahiro, also who lost the ability to use his sixth sense and the ability to see spirits. He feels uneasy and reluctant about being an onmyoji. Even so, he still assists with various tasks and even where one day Mokkun assists with awakening his true powers. Even though he pledged his loyalty to Seimei, he assists Masahiro with various tasks around the area.

I know mokkun, or Guren, isn’t a fox spirit. His form even shows that with the unusual and typical fictional beast drawing. His true form is called “Teng”. I’ve had a few comments on figure.fm where people would strongly say that Mokkun isn’t a Kitsune. I know!Â  So why did I add this here? I feel that this show took (or shares) elements of the fox spirit and merged them into Mokkun. Yes, I’m not familiar with Japanese mythologies, but I still feel the need to list this here as this is also a good show as well. This show is worth a watch! The OP and ED’ tracks are also top-notch. Do have a listen! 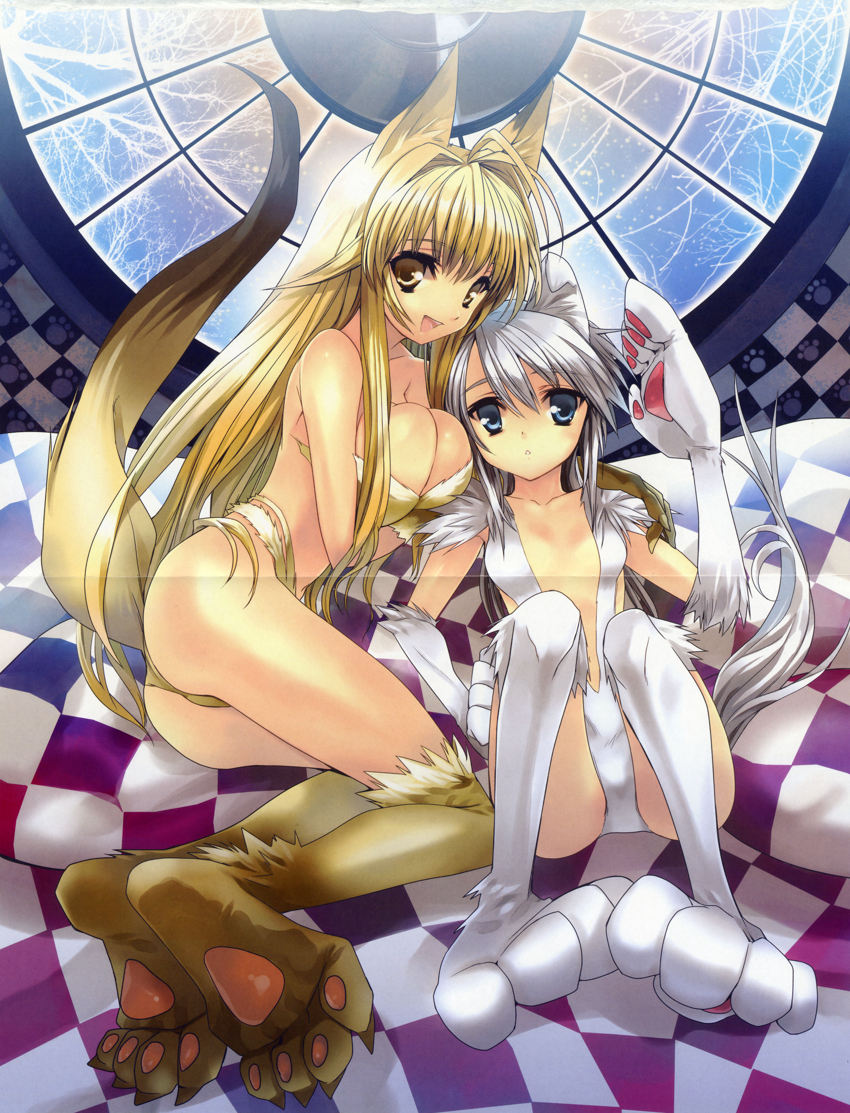 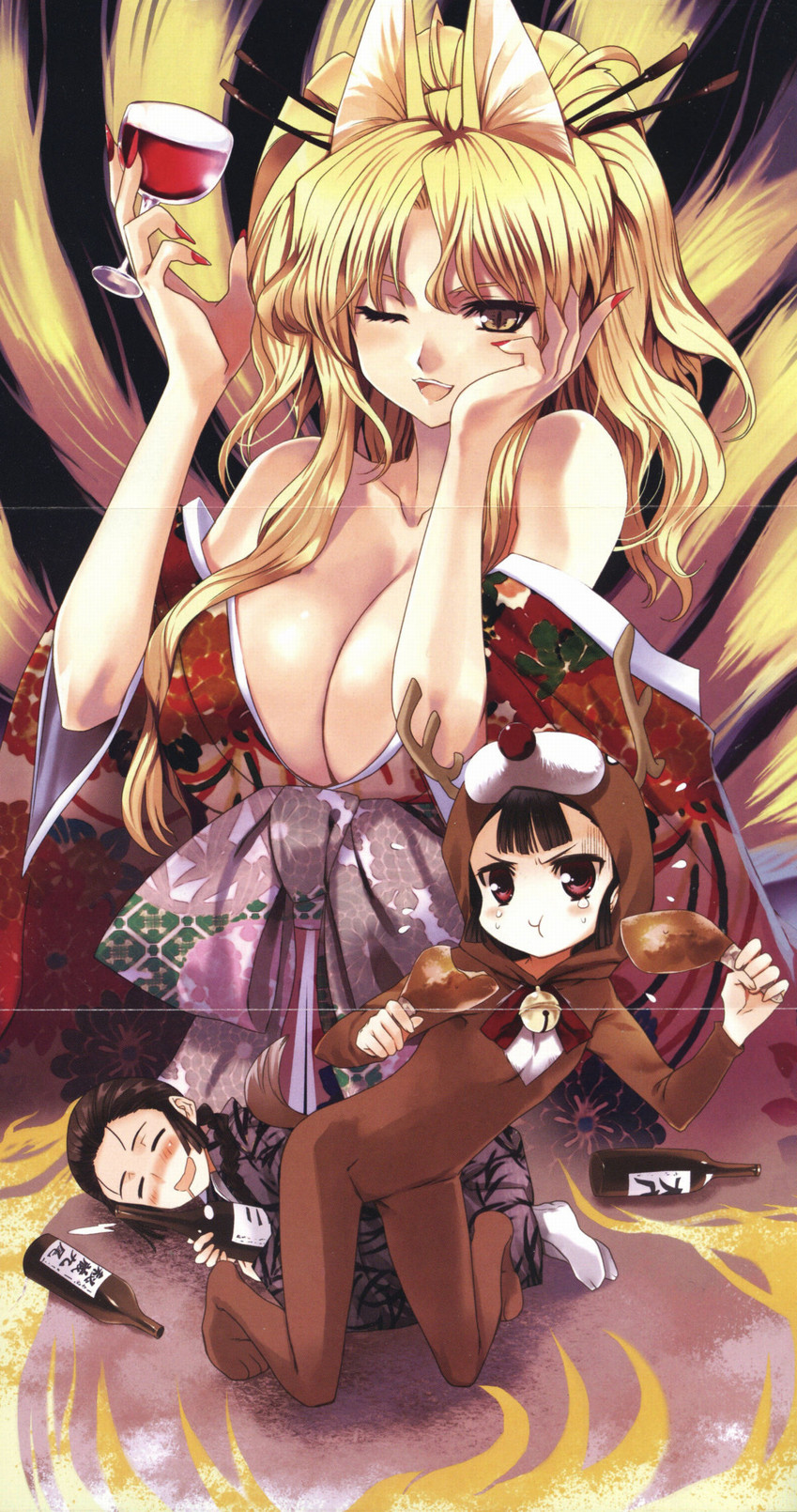 Sidenote: Not my favourite, but it’s one of the Anime that shows more sides to a fox spirit when ignoring the overly ecchi/perverted content. Watch at your own risk. It’s enough to paralyze one’s mind….*sighs*. I’ll understand if you don’t want to watch this heh.

Story revolves around an innocent minded highschool student named Kouta Oyamada and a fox spirit named Chizuru Minamoto. Chizuru invites Kouta to the music room where she confesses her love in Kouta causing both to enter a very awkward relationship throughout the show. Adding to the chaos, a wolf spirit named Nozomu Ezomori transfers in stirring up more trouble than needed.

Ignoring all the ecchiness, Chizuru’s oppai, and the perverteness, this show is decent enough to watch. There is tones of foxy content to keep one interested in it long enough before completing, shelfing it, or dropping it. The show drops lots of “Kitsune” folkore/myth contents to support Chizuru’s importance. The animation and special effects are great when spotted. What I found somewhat interesting was how Chizuru and Kouta merged to form a special foxy-human form with more power. Chizuru’s mom is a 9 tailed fox spirit of great importance.

Yobi is a very unique Anime created by a Korean studio. I highly recommend watching this movie about a foreign fox spirit living amongst aliens that crash-landed on Earth. What makes this an honorable mention are both the story and it’s animation, they’re not typical mainstream stuff. They’re both more of a Ghibli films type with a story that keeps you hooked. It’s simple, but it’s special enough to give it that awesome vibe for anybody to watch. Not an Anime fan? This is for you!

Have yet to watch and complete this show…..

Thank you! Hope you enjoy watching at least one of these shows, or have enjoyed watching one! Please don’t burn any of the furries just because of those that can’t contain their uh….temptations :P. Well, this shall be my respect to the fox spirits within the Land of The Rising Sun! With this, I’m sure March will be finished as a very epic month this year as well! The super-moon that orbited Earth on Saturday, March 19th, 2011 is proof of that! Year of the Rabbit, Spring, & March full moon! What more could you ask for? Pokemon B&W, More Shinkis, and lots of wanted Anime figures for you Otaku’s out there! Money well spent!