Looking back within my blog’s history I noticed I haven’t really touch upon gaming that much. I’ll do a quick, yet lengthy, update in gaming before I revert back my Anime figures. I’ll basically list my gaming collection to date and point out the ones I like from the ones that I dislike, along with an ignorable rant at the bottom about gamers themselves not knowing what they want. 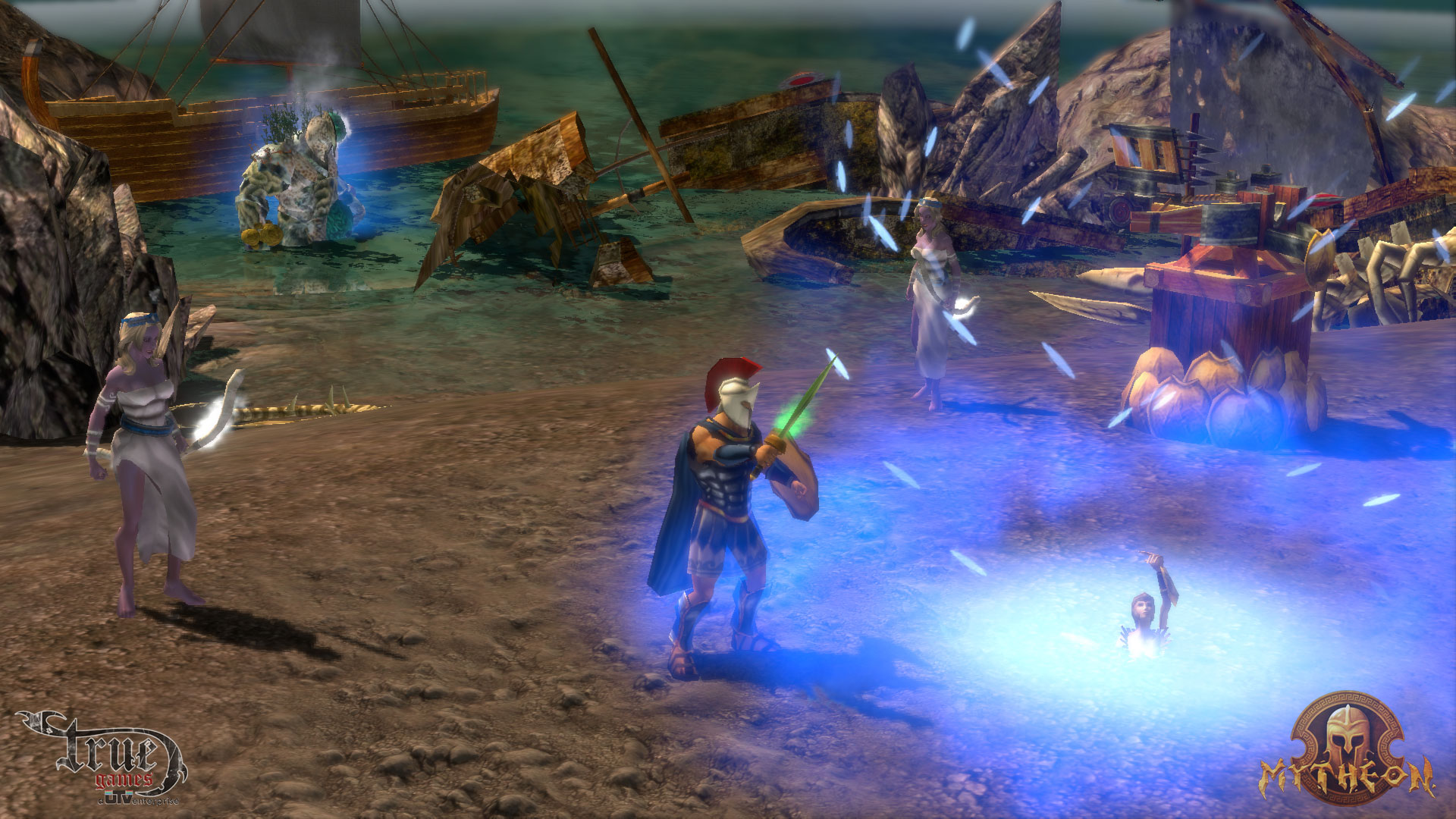 The above wallpaper/image is from an upcoming game called “Mytheon” from Petroglyph Games, their forums.

And as an added bonus, my PSP collection.

My PS3 collection has grown while my PSP collection hasn’t even grown an inch. I mostly use my PSP for remote play and had used a few times on my trip to Europe. I used it mostly as a MP3 player, media storage, or to show people pictures on the go. My favourite game out of that list?

Valkyria Chronicles – Reasons why:
Why is Valkyria Chronicles the best game in the collection? For the fact that the developers added a unique First person mode as well as get it right the first time around. Normally when something gets implemented for the first time it tends to lack heavily. The game itself plays out like a novel having two pages containing a chapter which contains episodes and a map per for you to battle on. Overtime as you continue playing through this you unlock the HQ, Barracks, training grounds, weapons upgrade, cemetery, Encyclopedia information containing various information and backgrounds, and various other materials. Whenever you hit a brick wall in the story mode you can enter skirmish mode to freely train your troops to gain more points and experience in an attempt to finally beat any difficult story mode missions. If that isn’t enough then the add-ons for this game should assist with further re-playability, as well as a PSP version coming out soon.

Fate/Unlimited Codes – Reasons why:
What makes this game my favorite within my lacking PSP collection? Well, the quality and atmosphere should be the first to come to mind. When I first landed on the menu page the background music and the art style drew me in instantly giving me an interesting atmosphere. Besides that, we have the detailed character designs (with multiple costumes), interesting Background music, unlockables for replayability, character voice overs for default narration, two survival modes, and each character actually feels unique. The music and the story is probably typical of these kinds of 2D fighting games with each element complimenting one another in a respectful manner. I tried Mission mode but only managed to complete a few out of that.

Reasons why:
It just feels as if this game just wanted to be on the market just for the sake of just being out there. Unlike Infamous, Valkyria Chronicles, Fate/Unlimited Codes, and etc, this game just doesn’t give players enough re-playability to just continue playing. I’m aware of the second Marvel but that hasn’t been obtained so I can’t comment on that. If there was some kind of map editor or a random map generator then maybe I’d be more forgiving on this game.

Honorable Mention:
– Infamous:
I had to mention this game as it made me spend a few hours invading my thoughts when typing out the Valkyria Chronicles quick thoughts. The story and implementation are top notch and deserve to be looked at. What bothered me about this and made me place it in the “honorable Mention” section was the fact that the game kept rehashing little features which turned “meh, so you didn’t try too hard then after all to make this game“. Like I said, the story is what makes this game unique and special, just when you decide to stray from the story everything becomes…….”meh”. On the pro side again, the RPG elements with the special powers is an added bonus and should be within your focus as to get the edge on the second and third island of the main city as you shall be constantly swamped by re-spawning enemies.

Quick note: Don’t let gaming review sites or friends dictate what you should or should not buy. If you want to play a certain game then research what the game is about in detail before deciding whether to obtain it or not. Game review sites shouldn’t dictate what you play or should as they should only suggest, same goes with your friends. Its your choice, not theirs. I could carry this over to any Anime watching discussions as well as people tend to sway FAR too easily on other people’s opinions.

As a gamer myself I have always been bothered the way gamers these days tend to shift games into the wrong direction. We went from quality games to games that are now just made just for for being present on the market without any real substance or meaning to them. I can’t seem to enjoy a multiplayer game experience much anymore as the developers themselves don’t know what they want either. For those developers that do know their path within the gaming industry and the meaning behind each game, they make seem to suffer more then those games that lack any real positive trait. Whats the deal? Bad statistics? Bias? Hype? Successful mass-media brainwashing? Gamers easily swayed by peer pressure? Numbers don’t normally mean games are better then others.

For the past few years gamers have become far too spoiled in their gaming hobby. Everything seems to be taken for granted as ifÂ  they’re a bunch of rich kids with butlers, or maids, able to get anything they wish for. Whatever happened to “fun”? You know, “fun”? Fun, that makes you happy were you are able to relieve the stress from a hard days work or to enjoyÂ  a multiplayer session without someone going “N00b, learn to play!”, or some gamer that constantly whinesÂ  about how a game is progressing.
If you follow certain game as they progress from programming to the physical copy that you hold within your hand will be aware of the mentality change of certain individuals with the said community as you follow the antics of the “fans” of the game. Simply look at Gran Turismo 5 where the fans whine about car damage instead of requesting more useful game play materials such as track add-ons, other features, requested cars, random track generator, custom track editor, or some kind of paint texturing design to further customize the car. You already have certain cars with damage yet “You want moooore?”. Why desire car damage when you can ask for more tracks or other gameplay enhancing material that adds re-playability? I always obtain hordes of cars but lack interesting tracks to drive/race them on within Gran Turismo. You already got wind ofÂ  car damage yet you want more *face-palms*. Request more game content damn you! You never mentioned that meaning the developers won’t program that into in Gran Turismo as the spoiled bunch wanted MORE car damage. You guys whined about shitty AI yet you don’t request it?

Oh wait, I have one to add – Adaptive AI: This Ai behavior tracks the player’s behavior and learns to counteract the player’s driving habits with their own counter-tactics.

If you gamers follow other gamer’s opinions you are only hurting yourself as you are not playing the game you yourself desire. Same deal goes with Gundam Crossfire. The fans of the game simply said it was shit and never properly complained to Bandai-Namco -BEC giving them the necessary pressure to make a “proper game”. Speak up while you can before your opinions are forever removed by some random Martial Law event or random gaming bill that prevents us from voicing out. You never know, Germany and Australia are already getting shafted by such stuff and China banned C&C Generals as it gives off the wrong image of China.

—
“No thank you. According to IGN and Gamespot this game is garbage.”
—
Game review sites are only there to suggest. Ask other players, view youtube videos, askÂ  for gamer opinions, check forums, and etc before you come to that conclusion. Do more research before coming to that silly conclusion as that isn’t really your opinion as you simply borrowed their train of thoughts. Just because they said doesn’t mean it is. I know someone that bashed Gundam Crossfire using what other game review sites, turning all hypocritical, saying the same thing without even setting foot in the game, neither the game itself or the demo.

Next article shall contain the Di:Stage and Figma Saber review. Maybe I’ll sneak in Haruhi and Mikuru’s summer version in as well as I ignored that up until now. If you read this far then sorry for the wall of text, thank you for visiting though.