Heyo! Happy Valentines Day to those that celebrate it, I myself don’t. Wanted to actually celebrate another anniversary of my blog with some KanColle fun instead. Wanted to share my recent progress within that game while eying my in-game goals.

(Images Printscreened and inserted in Photoscaped; Images may vary in sizes due cropping.)

I’m overly happy, and addicted, that I finally was able to jump into KanColle. Nicely accepted on a (Kitsune) Wednesday along side with a Busou Shinki buddy, Nas’. A long time coming. A year (maybe two) of Minecraft drama that caused me to miss out on jumping into KanColle sooner, especially with it all causing self-loathing and venting. Constantly focused on wanting to build by rebuilding what was once long in Minecraft that it prevented me from playing PSO2, even jumping onto this game of KanColle. Now that I am on it, I’m over-joyed in a happy addicted manner. Finally meeting my favourite ship girls while happily making them stronger.

I love how this game even makes you priorities what ships you want in that it gives each girl proper weight for attachment. Have to carefully level them up, treat them kindly, and to keep your base tidy due to the 100 ship cap, or so I heard. Each ship girl is your special ‘comrade’ to take special care of.

I obviously would love to share images of Renge and Varakitsu, just that I’m not into the whole V-day bullshit. Pardon the strong negativity, just that I find it all pointless in how out of the year you have to spend only one day pampering your loved ones in some way, shape, or form…..especially in perverted ways. I’d rather spoil a loved one all year-round, not just one heavily marketed day. Because of that, this article is more focused on KanColle.

– What makes KanColle Appealing to me?:

The fact that the ships were given human form, and beautiful at one. I mean that straight to the point with no meanings on them being “Anime girls” or anything like that. The whole – ‘Captain treating the ship like a person’ – type of respect that has been seen back in WW1, WW2, and to this very day. It’s probably meant in a more possessive ‘slave’ manner, but to me it means that these ship girls are my “friends”, my “comrades” in arms.

KanColle is just awesome that I’m able to respect the real ships along with the fictional ones. It’s also the designs. Same for this, same for Arpeggio of Blue Steel. Even more awesome with how each ship is actually given those special attachments for you to get closer with them. In how you have to take care of them in how to level, to keep them not being sunk, and to make sure your base is tidy to allow you to let loose your dangerous fleet.

I’ve been trying again, and again to complete E-1. I simply can’t reach the “I” node. I hit everything except for “I”. I happily obtained Sendai through shipbuilding, even some nice equips. Even tried forcing my hand a few times to end up with lengthy build times.

I’m still happily playing things at my pace, but I don’t want to be pushed either by someone saying that I should be elsewhere or shown ‘better’ ships. Can’t help it on the second one; First one being more of my issue of wanting of ‘staying ahead’. Still having great fun….well, up until real-life issues keeps smoke-screening my fun.

I’m basically stuck in 1-3 farming and 1-4 because I can’t beat the boss. Used E1 to also level up my ship girls nicely to make them stronger and prouder. Shall be doing more of what I can.

It goes without saying that the fleet composition changes on the fly. Every within the same hour it constantly changes, especially for Fleet 2. 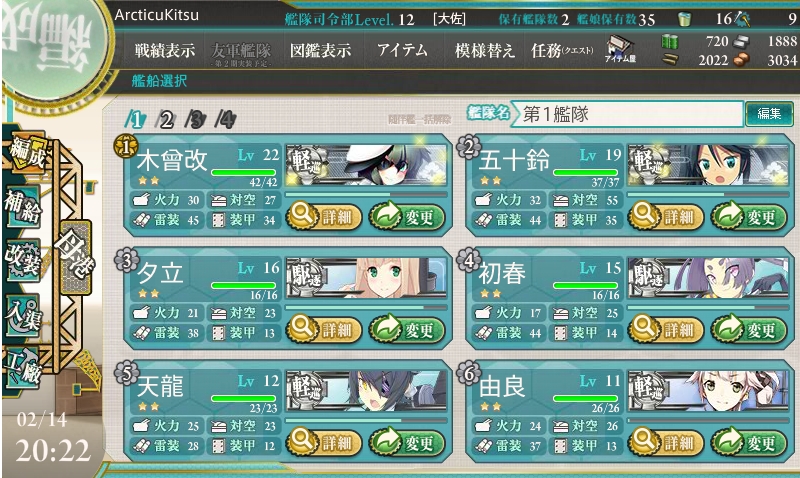 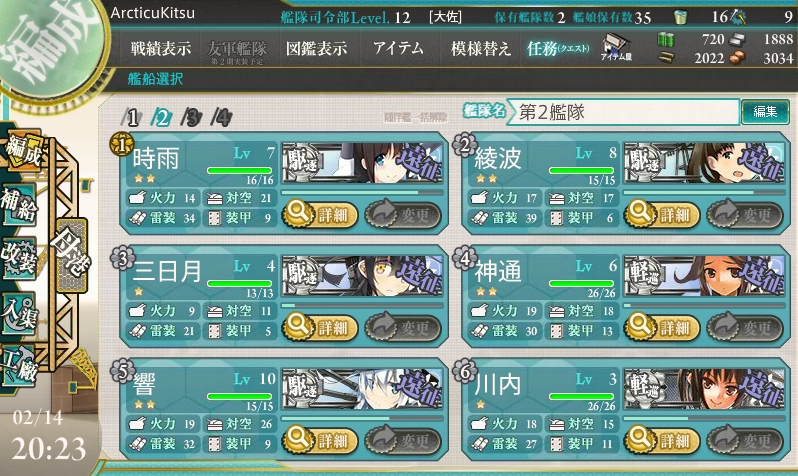 – Ships I wish I could acquire:

I guess I’m going to go back to self-loathing, self-blaming, and all that thanks to Valentines Day “rubbing salt in my wounds”, or as the saying goes. I want to be happy, not depressed. I’m happy to partake in KanColle, even my foxies – Renge & Varakitsu – just not in a non-perverted manner. I’m not doing anything perverted. I’m only admiring them while respecting them, even wanting to treat them as humans. Constantly being forced into sour moods by external forces implying others amount to nothing and etc. Going to keep enjoying a more positive experience with these lovely ship girls to keep my mood up. Too proud for suicide so not doing that any time soon, nor later.

I’ll eventually have you in my grasps, Bismarck! It shall take quite a bit; We shall be great comrades *Salutes*.