I simply love how I constantly am discovering more lovely Frame Arms Girls to join my collection. One such lovely to join me as my fourth is the lovely ‘kemonomimi’ type FA Girl named Innocentia, a playful type.

I have to say that I actually quite love the aura radiating off of this box in that pinkish reddish aura. Similar to how you would see fog tinted in colour, one would see a lovely shade of pinkish red emanating from the box. Because I wear glasses my eyes tend to pick up light a bit oddly, thus the ‘aura’ mention. It’s nothing odd, as witty comments tend to be made, yet if one is familiar with how glass behaves that’s how you see tend to see auras reflecting off objects at times.

Innocentia also had a weird little mishap that was tracked on the postal EMS tracking. One morning some Canada Post driver (probably still half asleep, or illiterate) mistakenly brought the package to another home at an earlier hour than I’m used to. It claimed I gave a different address (false) which then forced this delivery person to head to my place to leave a package notice, yet never buzzed to notify me my package is there. Canada Post has this habit of not doing such. Thank god I track all my packages because it’s a painful dramatic hassle otherwise. Not even out of the box and she already had a tale to tell. Lovely heh.

Yeah, she’s one of my favourites of her simplified cuteness.

One thing that’s obvious is that she rivals Materia in simplicity, yet has just that much more to allow her to stand out further than Materia. Materia is a starter type, while Innocentia is more of your ‘kemonomimi’ (Animal attributed humanoid) with the choice of cat, fox, dog, and etc. Just missing some tail accessories.

A storm rolled in with only the edge that it rained, rumbled, and darkened the area that it caused my lighting to be all over the place.  A pair of rumbles with it mostly being dark, windy, and a bit rainy from the edge. Tried to keep the images as bright as possible. As for Materia, she was a fun build. She took me around 5 hours to assemble and have fun posing with. Quite rewarding.

She has a nice range of posing that the first thing had me make her point. The second thing was to get her into that lovely ‘nyaa’ pose as a kitty, something I’ll keep expanding on once I feel I can photoshoot her (and others) safely without losing parts in the vast outdoors. Also have to wait for nature to go green because Canada is mostly a white snowy winter wonderland. 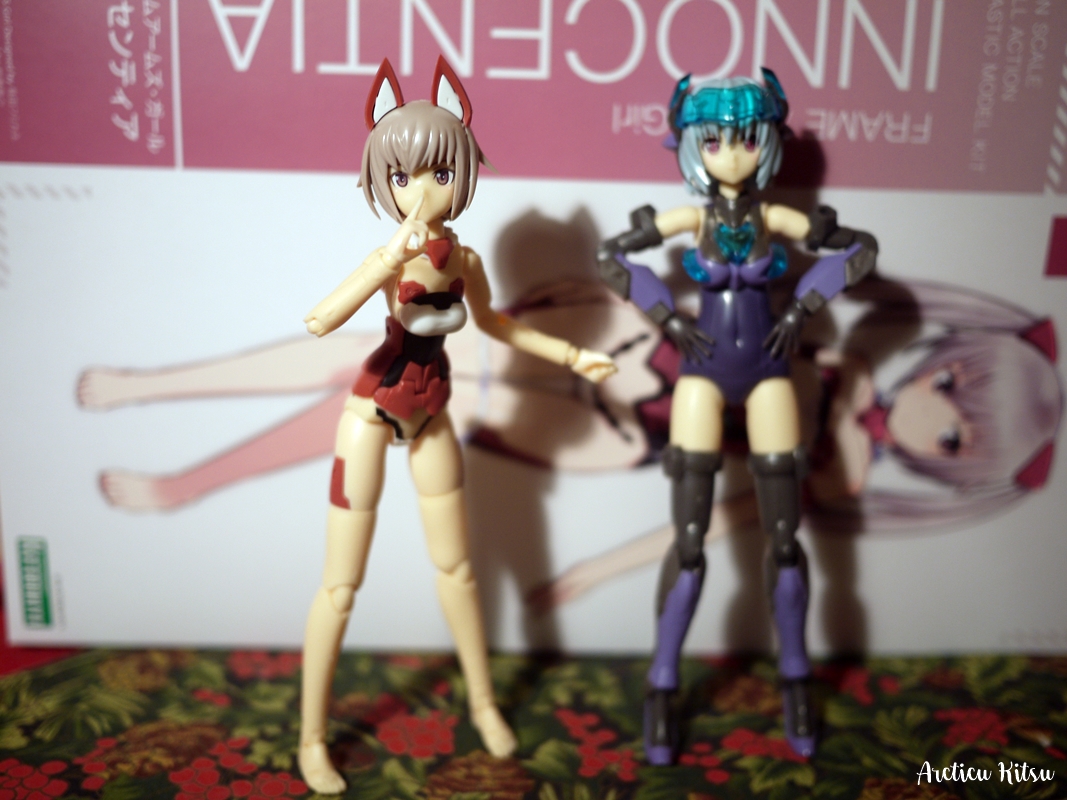 I’m mostly pleased with Innocentia, even having expected her to be a quicker build. Less parts, more accessories to customize, plus more posing range when compared to Hresvelgr. She’s close to Jinrai’s medium range variety that she could, in theory, be considered a beginner type kit. Her, and Materia types for those just beginning to get into the line. Hresvelgr is for those with more patience, and I guess further into the series. I love the red, white, and black mix to her theme, even with how she only has skin exposed leggings, arms, and legs for the very casual appearance. She even has a second pair to such of having black on the hands, arms, and legs for a more ‘combat’ role, or even outdoors. You can switch & swap between the two skin & black sets.

If one had to compare her to Busou Shinki, I guess Kohiru & Renge would both be appropriate because of their style. The kemonomimi stuff towards Renge, while the ‘skin’ limbs more towards Kohiru. I love that mix. A shame there’s no simple weaponry, yet she can always borrow from others (i.e Jinrai & Hresvelgr).

I also love how she comes with 4 sets of kemonomimi ears, three being PSO2 styled mecha, and one being cat ears. Also makes sense when there’s a collab going with PSO2 with Kotobukiya using Frame Arms Girl. The head parts can easily appear in PSO2 (the red & white parts) that hype tends to reach further. You can even choose to go with twin-tails, or not. I experimented with going without as you’re given two sets of hair parts to customize the head. Not sure which I prefer, maybe even having to allow each grow on me. Another thing to note is that she appears a bit too smug, even appearing as Felix from Re: Zero. That’s slightly concerning in a way. One can easily make a Felix FA: Girl custom, as you could with turning Hresvelgr’s swimsuit body into a submarine Kanmusu custom on her side.

The negative parts to Innocentia being a typical Frame Arms Girl issue, yet also a relieve as to what they are. one of the issues is the hip ball join connecting the lower legging to the upper body that it tends to pop out. Another issue being how I built the black shoe that the pegging won’t really stay in the hole having the shoe slip off. May have to put a piece of tape to keep it attached. The bigger issue to me actually being that you’re given all these faceplates, yet Kotobukiya failing to realize two things about FA: Girls is that 1) sleeping faceplate, & 2) parts containers. Sure, I could paint one on, yet I don’t have that skill. Secondly, I could just go out to a supply store to get some parts divider container, something I’ll have to do now by keeping them in Frame Arms Girl boxes.

Overall, she’s a fun FA Girl that I love her style. I’m planning to take more images of her outdoors, even recommending her to others to purchase. A nice high 8/10. Shall quench my desire for a fox designed FA Girl as I seek out to find a fluffy tail fitting for Innocentia, among other accessories. She’s a fun one.

Thanks for viewing, and see you in Frame Arms Ep 2 review!