Remembrance Day on the 11th day, 11th hour, on the 11th minute and second. Sorry if it’s not the am, but the pm, as my computer decided to hissyfit too much this week. I did try to add it on the 11th hour though. 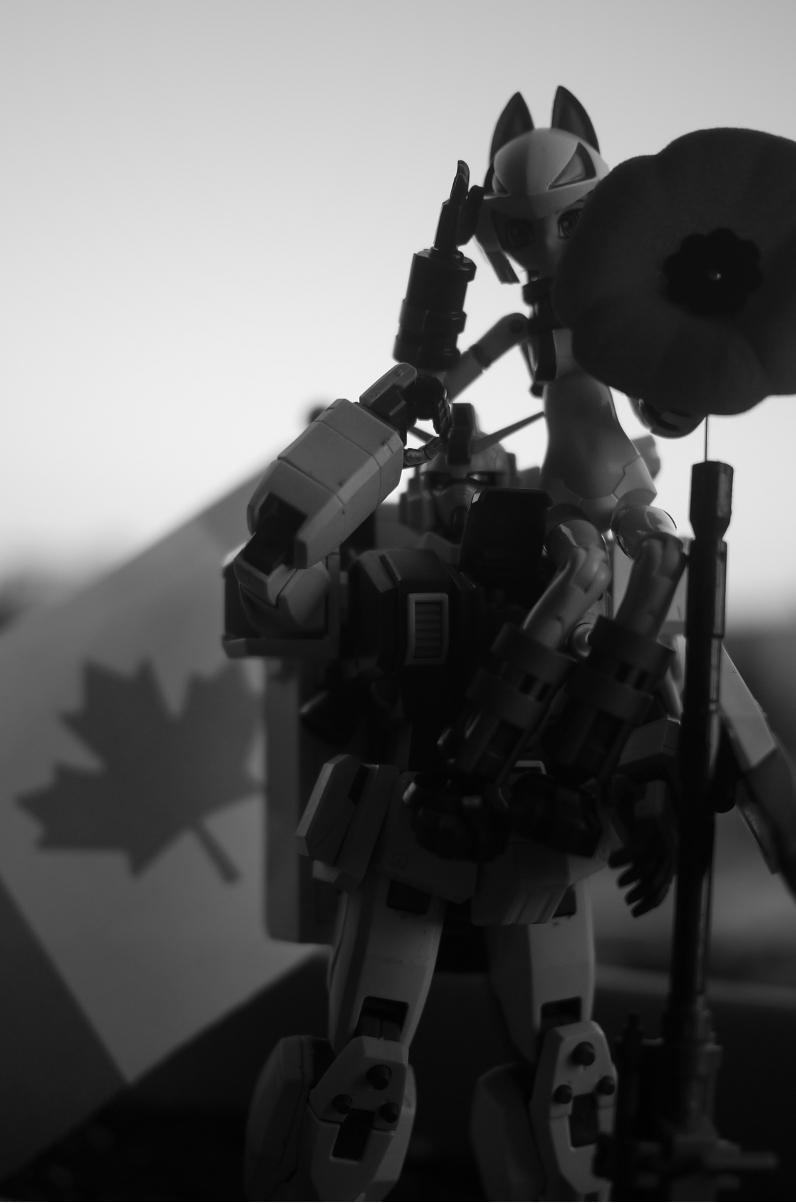 (Link – MySite) – Gundam RX-79[G] and Shinki Renge saluting to fellow troops with a Canadian flag behind them both.

It’s that time of the year again where we remember those who fought for our nation(s) and protected our freedom (around the world). I thought I’d keep things simple this time around and simply remind those viewing my blog about the past, and usually the things ‘they’ hate the most (students whining about constant WW2 material back when I used to be in High School).

We must remember. If we do not, the sacrifice of those one hundred thousand Canadian lives will be meaningless. They died for us, for their homes and families and friends, for a collection of traditions they cherished and a future they believed in; they died for Canada. The meaning of their sacrifice rests with our collective national consciousness; our future is their monument.

~Heather Robertson, A Terrible Beauty, The Art of Canada at War, Toronto, Lorimer, 1977

How do we remember those in the past? Wear a poppy after purchasing/donating it. You could also join some parades, parades, or simply or watch something World War 2 related.

And then there are Anime featuring World War 2 in nearly accurate, accurate, or alternate world of World Wars.

-> My article – (First 7 Anime listed below are within this article)

– Mobile Suit Gundam (Original uses World War 2 material and is inspired by it.)

Not interested? Here is a video embed of what I was forced to learn during History class, and for the assembly back during my High School years.

And the Canadian Anthem was drilled into me during the same times as well:

Let’s remember those who fought in the previous world wars, Korean war, current, and those that shall serve in the future. Respect those that fought in wars and support them the best you can so we may keep moving forward at all times! Don’t choose sides in remembering, simply remember those that fought and respect them by wearing poppies! Placing poppies on war graves, and stop graffiting various war related memorials around the city (whichever one you’re in).

Think I missed anything or have any errors within this article, do notify me so I may correct any errors! Thanks for reading and hope we may continue remember those who fought for our freedom!