Ever wanted to take care of a little android-like girl meant for combat? If so, then Busou Shinki – Battle Masters is for you! All your ‘mecha musume’ battles needs for you on the go for your PSP! Choose your favorite Shinki and let them loose in the arena! Both you and your Shinki’s fight as one in the future setting! 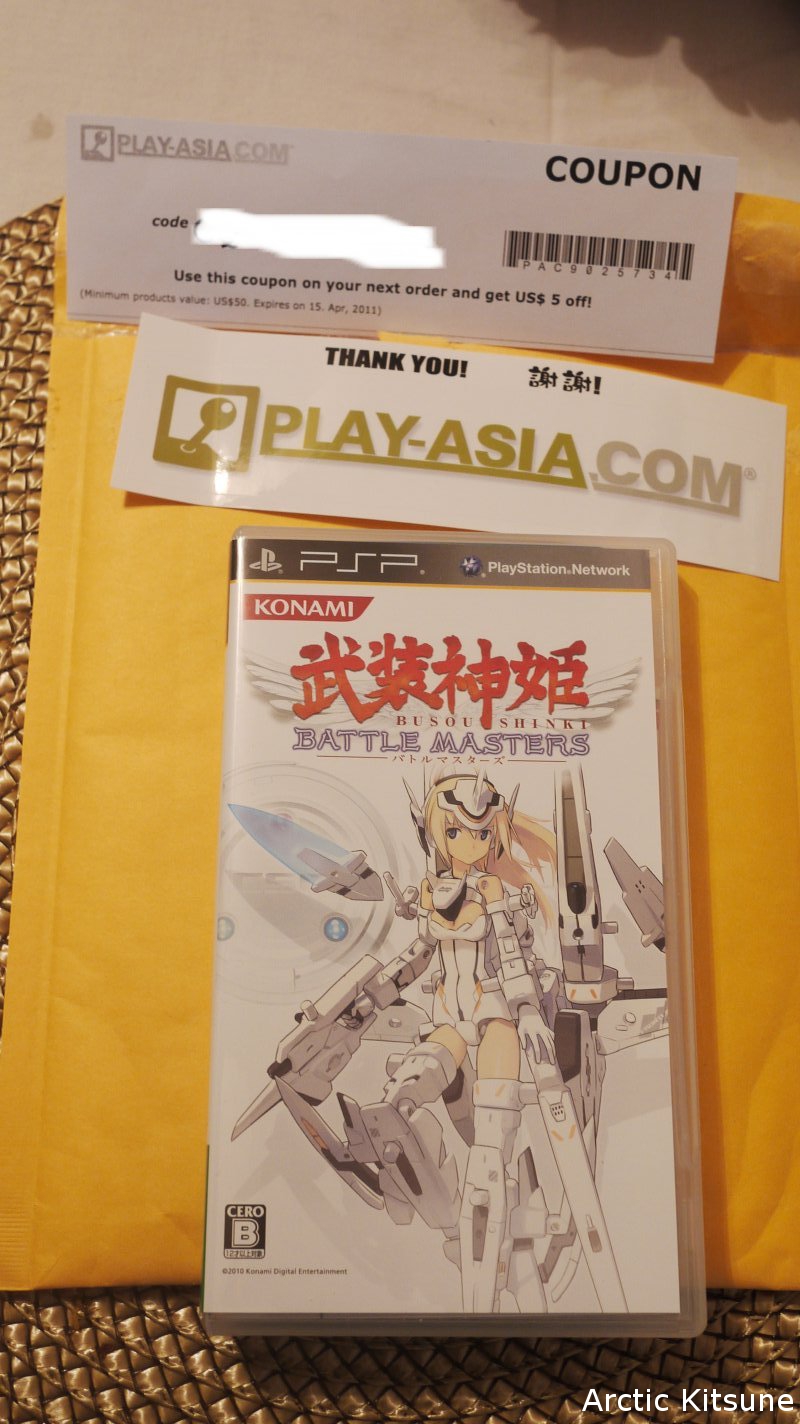 (All images taken with a Lumix GF1 – Pancake lens.)
– I hope you’d pardon the unpro game screen captures. I don’t have a hacked PS3 with screen capture, nor do I want one.

I acquired Battle Masters on Tuesday and spent a good day trying to figure things out. Well, maybe not a day. But I did spend most of it training both Arnval and Renge. Took me about two hours to obtain a payware add-on Renge from the Japanese PSN store. The game itself came from Play-Asia where I once again made a few Shinki go out of stock *snickers*. If you are interested then I’ll point you towards Konami’s “The Best” on play-asia which is coming out on March 03 (awesome month!). If you dislike play-asia then feel free to purchase it from AmiAmi, or whatever respected online retail store you can purchase these games from. 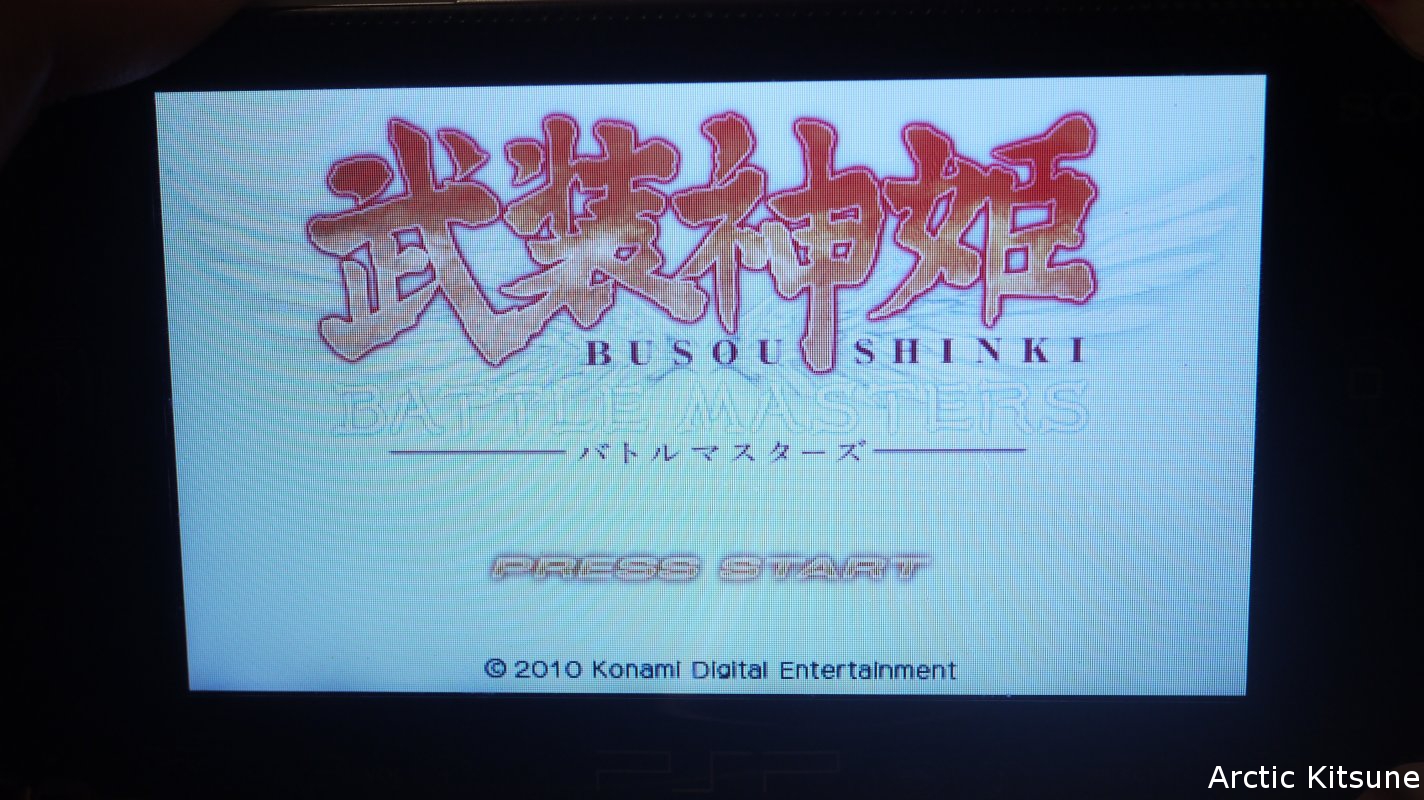 The game itself is in Japanese. All the texts, voices, options, and various game modes. The only English I seen was “Busou Shinki”, “Press Start”, “New Game”, “Game Load”, Stats on Shinki’s, and “Ride On!” before entering combat. If you guys want it in English then rally up with a petition. I’ll wish you ‘Good luck!’ on that as it does need much support.

When you start the game you will register yourself into the shop’s main computer. After that, you’ll be forced to unlock the mass-produced and highly successful Shinki Arnval. After that, you’ll get the choice to buy very basic armor, weapons, accessories, and what not. However, you only have a bit to spend so do so wisely! From there, you’ll gradually exit out and see the main city – I’m assuming it’s Tokyo in the year 2035-2040. 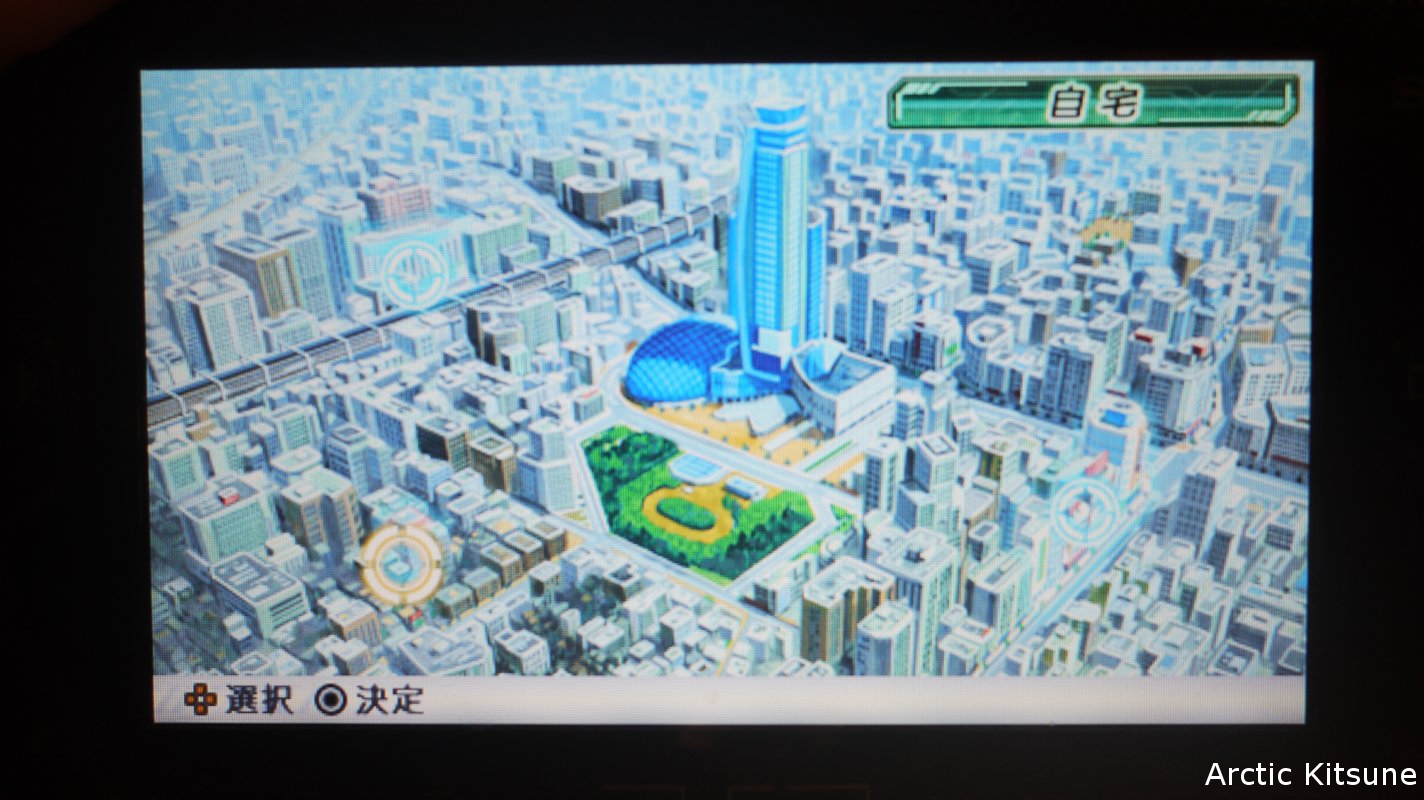 (Link – MySite) – The main city for all your Shinki needs!

Your Room:
– Inbox – For your mail.
– Stats – Your Shinki’s stats and place to equip them.
– Your overall progress in Arcade & Tourney.
– Overall stats – Love meter and Rank on all your Shinkis.
– Save – It’s a must! You can keep playing it from the very start if you so desire heh. 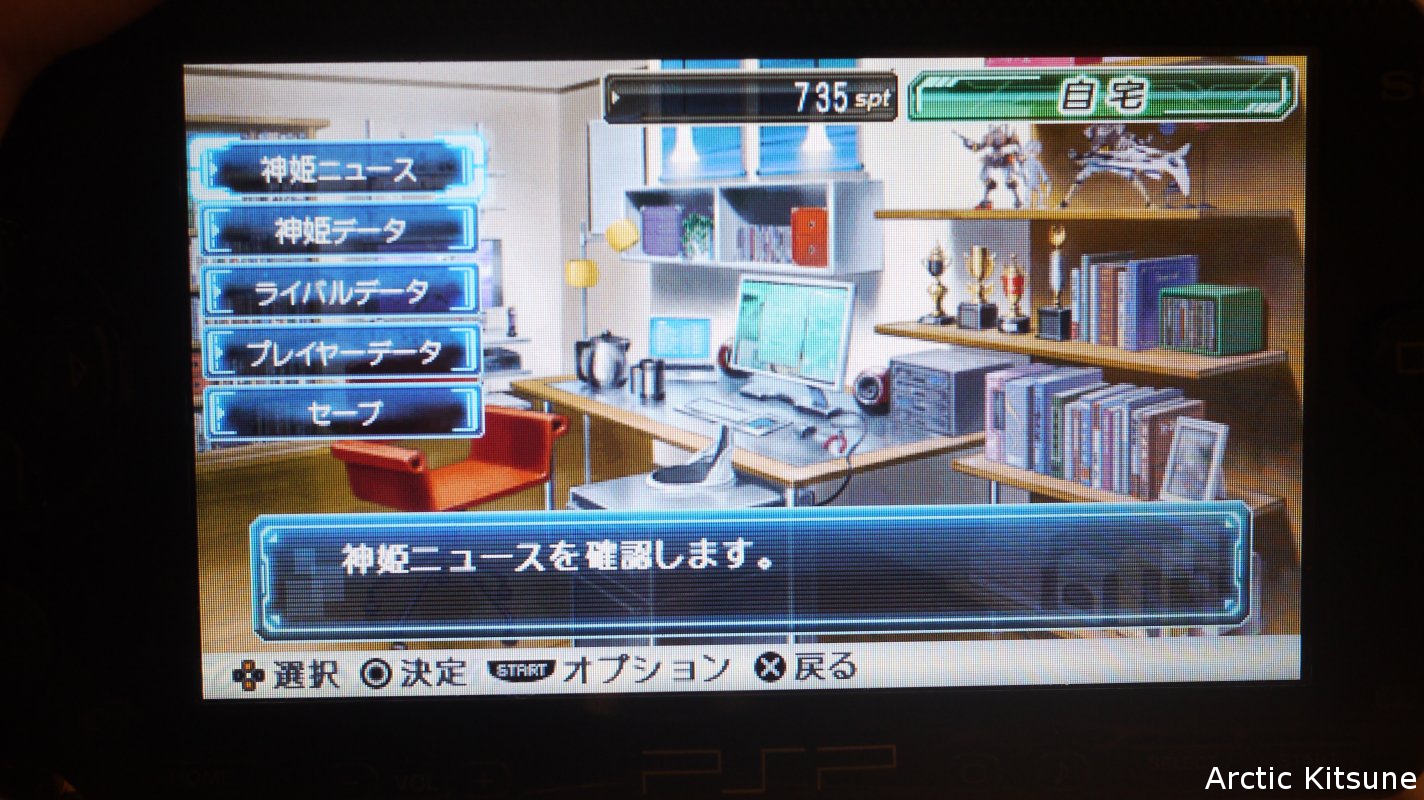 Your Shinki’s start at 0 (or 1) love and gradually ‘level’ upÂ  until they get to 20 Love. Love is basically leveling to show how much uh, love you put into them. The more battles you fight the more XP you get which gradually ups the “Love” another level. Battle Rondo works in a similar manner of “love”. Though, instead of Love as level, it’s more on the interaction with them causing them to be nicer or cruel to you when fighting. After every battle in Rondo you’ll get a single heart to hordes of them at a time.

Another thing to note is those Shinkis that came with the game have a story to them. What the story is about? I don’t know as I just started. Sadly, those that came through the add-ons got nothing when approaching an opponent. They both however both comment about how well you do when inside the battlefield. They cheer, taunt, praise, or cry when battles are lost.

I guess I should also mention that the realm that the Shinkis are in had a new technological breakthrough that this game uses as it’s reasoning for it’s game mechanics. This new breakthrough now allows both the “Master” and the “Shinki” to behave as “one”. Before a fight your mind and your Shinki’s would somewhat merge together allowing you to control your Shinki’s movements. She would then comment through portraits and later take her body back during the celebration or crying pose at the end of combat. 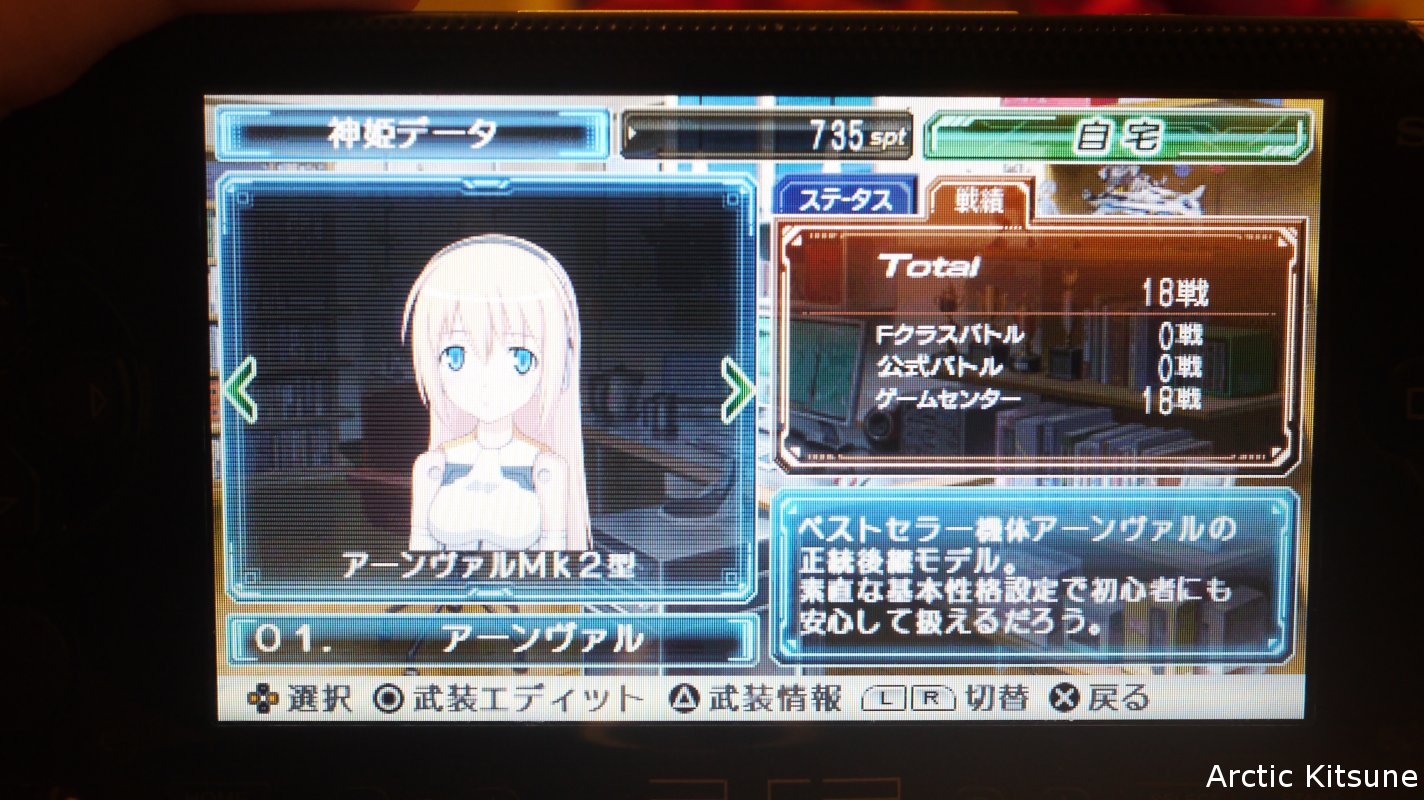 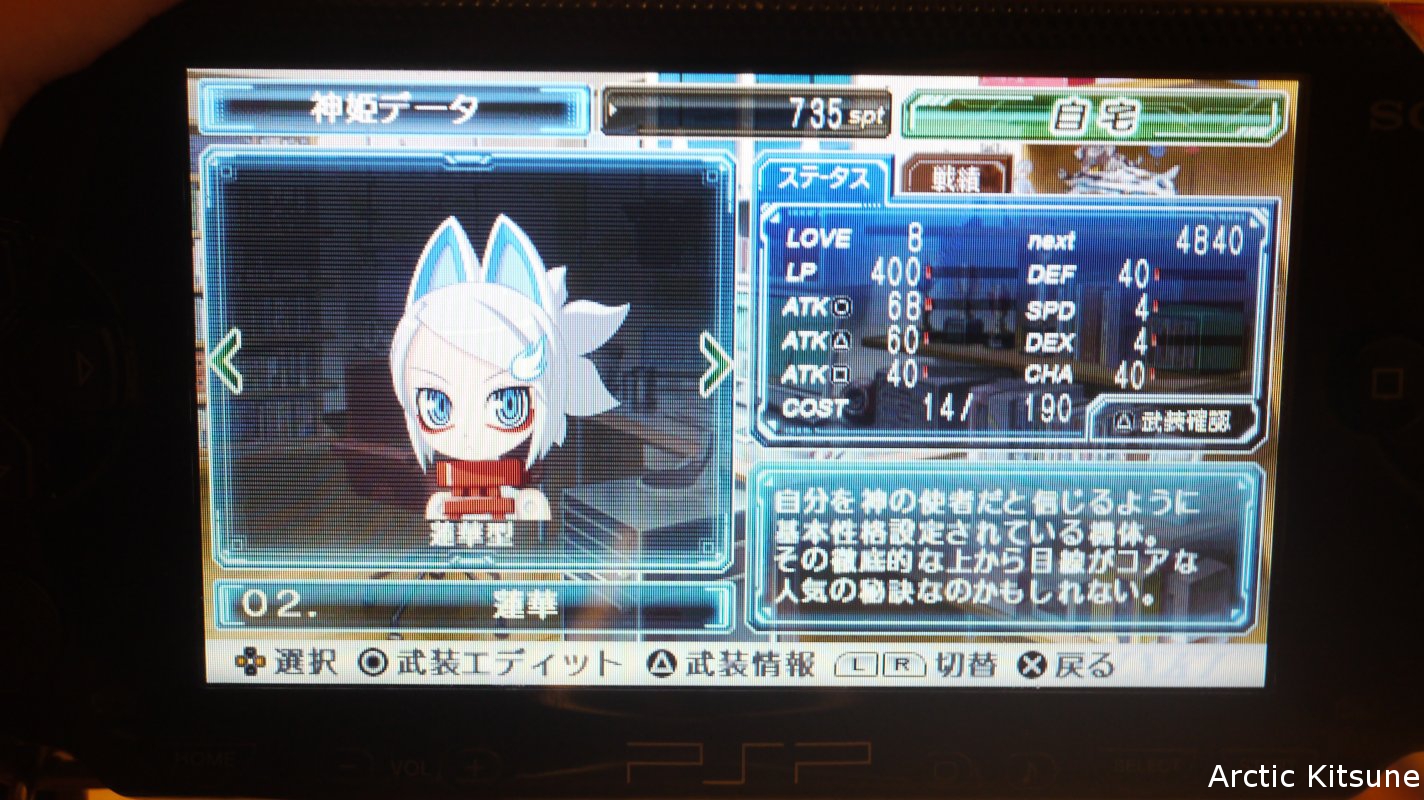 (Link – MySite) – A PSN payware add-on and my favorite Shinki.

Pressing “O” on the above screen and the middle option will bring you to this option screen.
– Equipment menu
– Attack menu
– Equipment sets?
– ??? 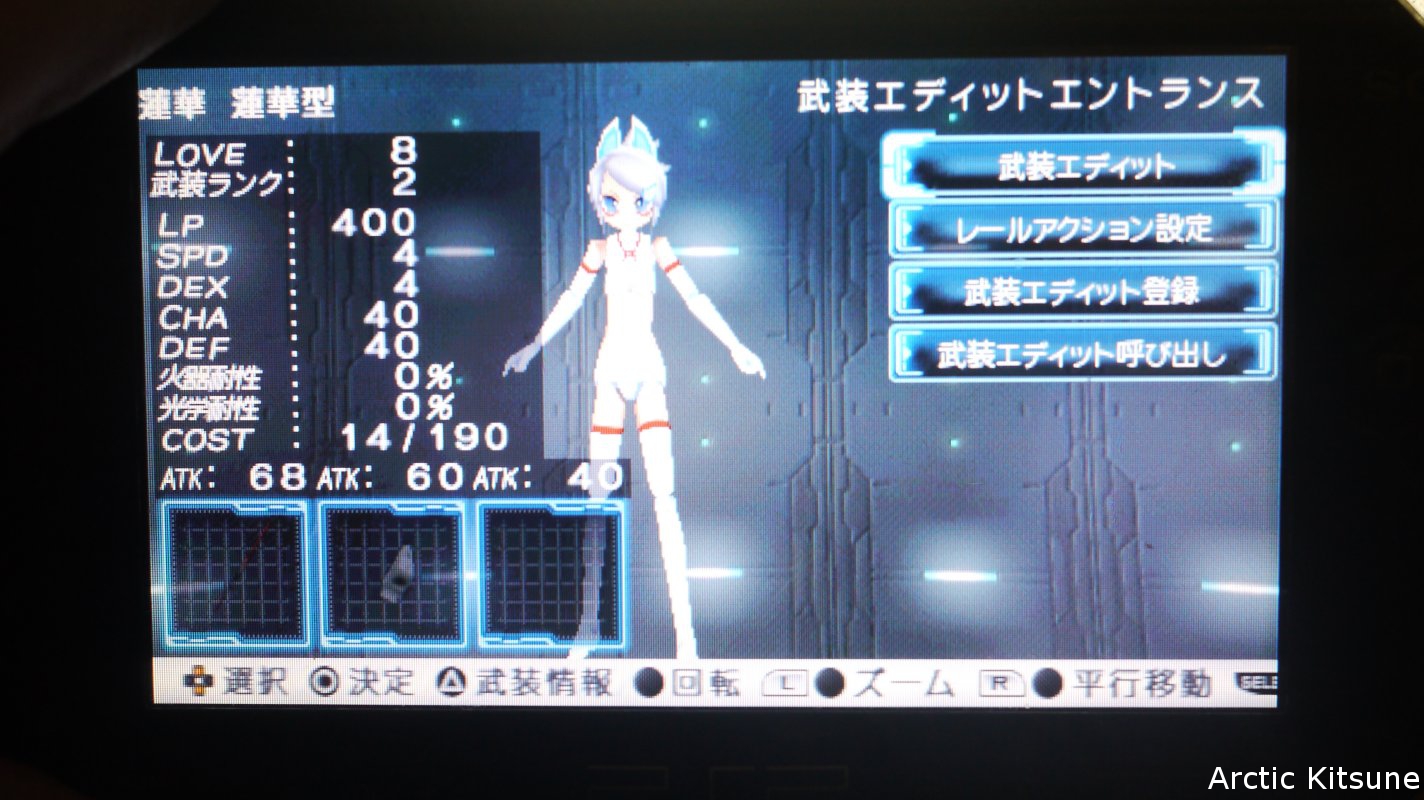 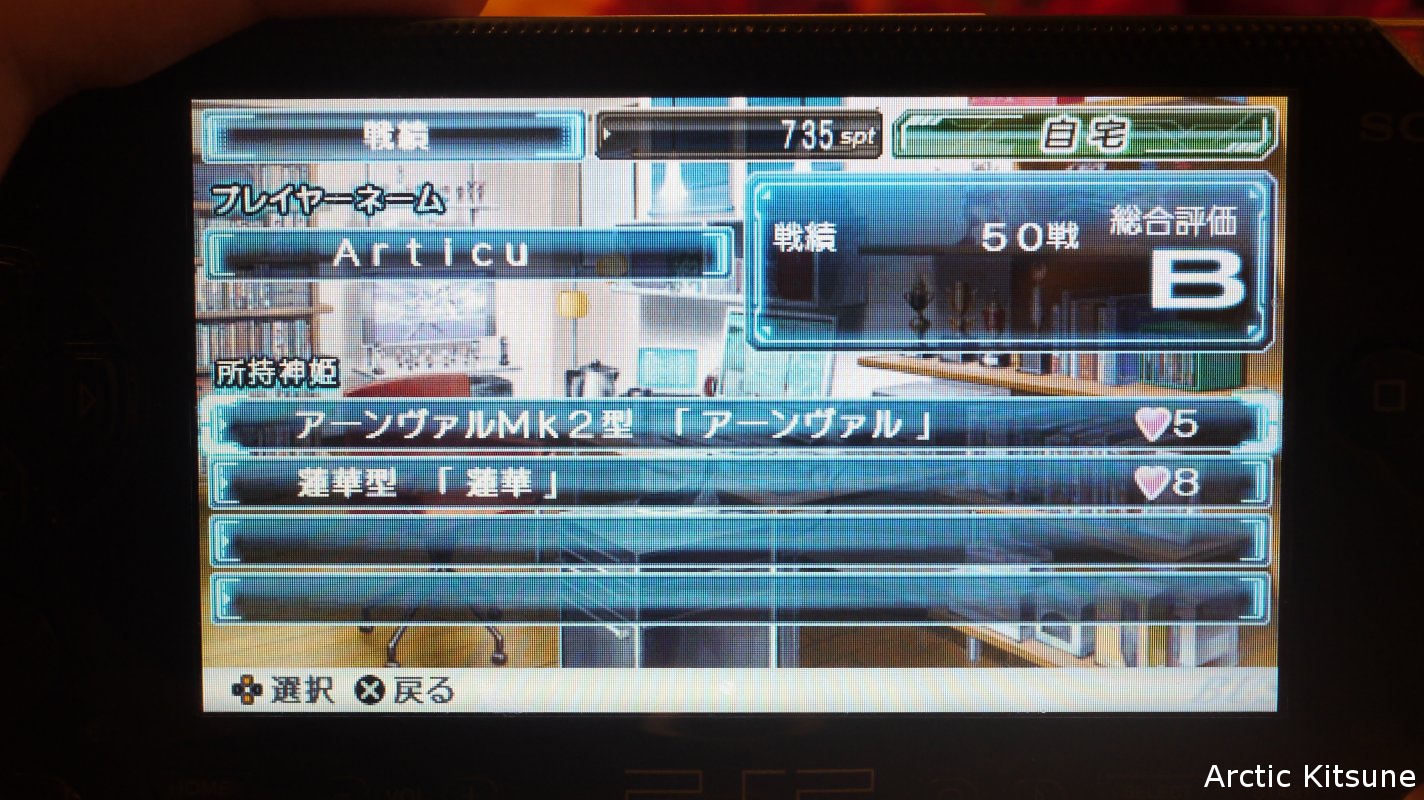 (Link – MySite) – Your Shinkis showing Love and their ranking. I had it at “A” and it now switched to B. 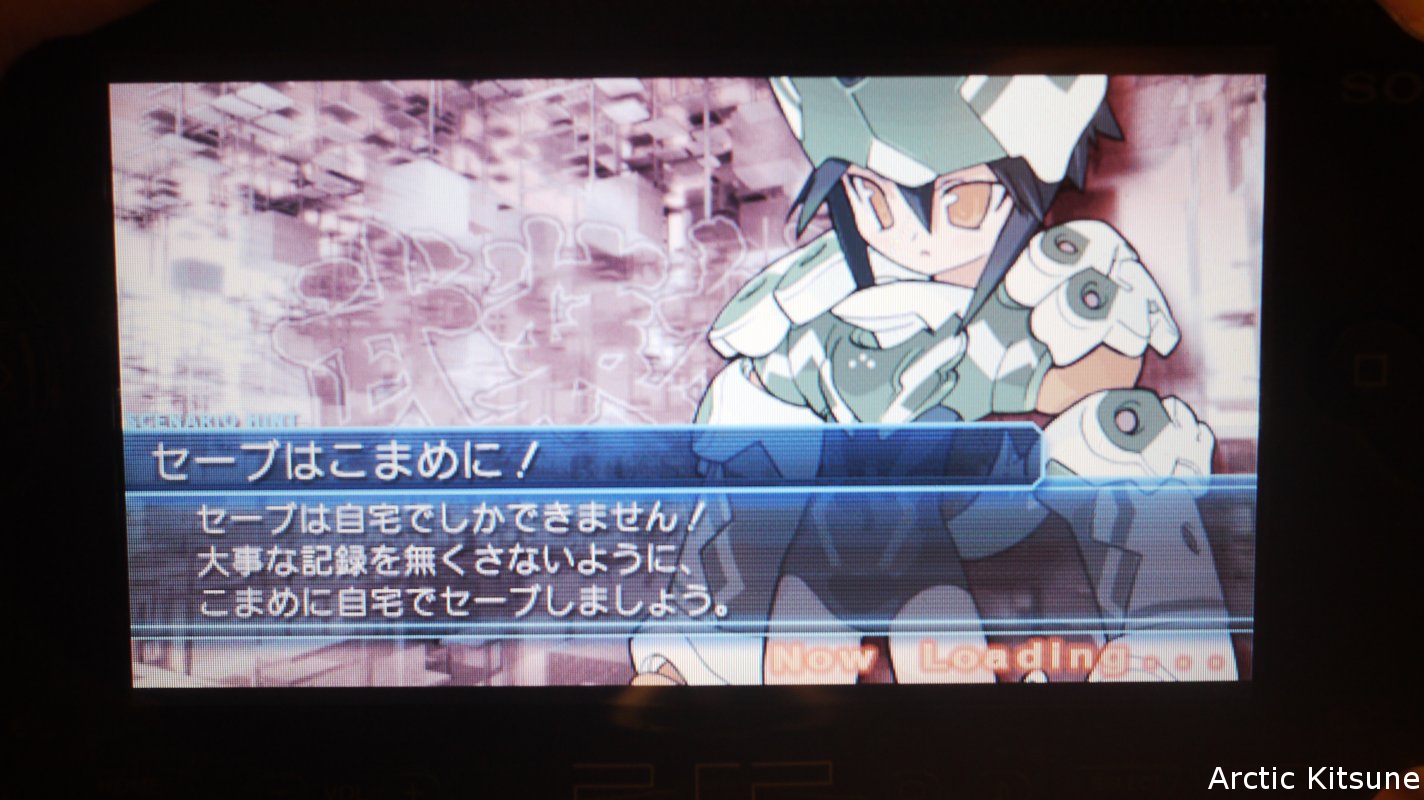 (Link – MySite) – One of the many loading screens. Takes about 30 seconds to a minute to load.

– Tag Team – This is where you can fight more than one Shinki’s in a tag team battles – (Max 4 shinkis in field).
– Store – For all your Shinki needs!
– Stats – Same deal when in your room.
– Multiplayer – Ad-hoc mode. 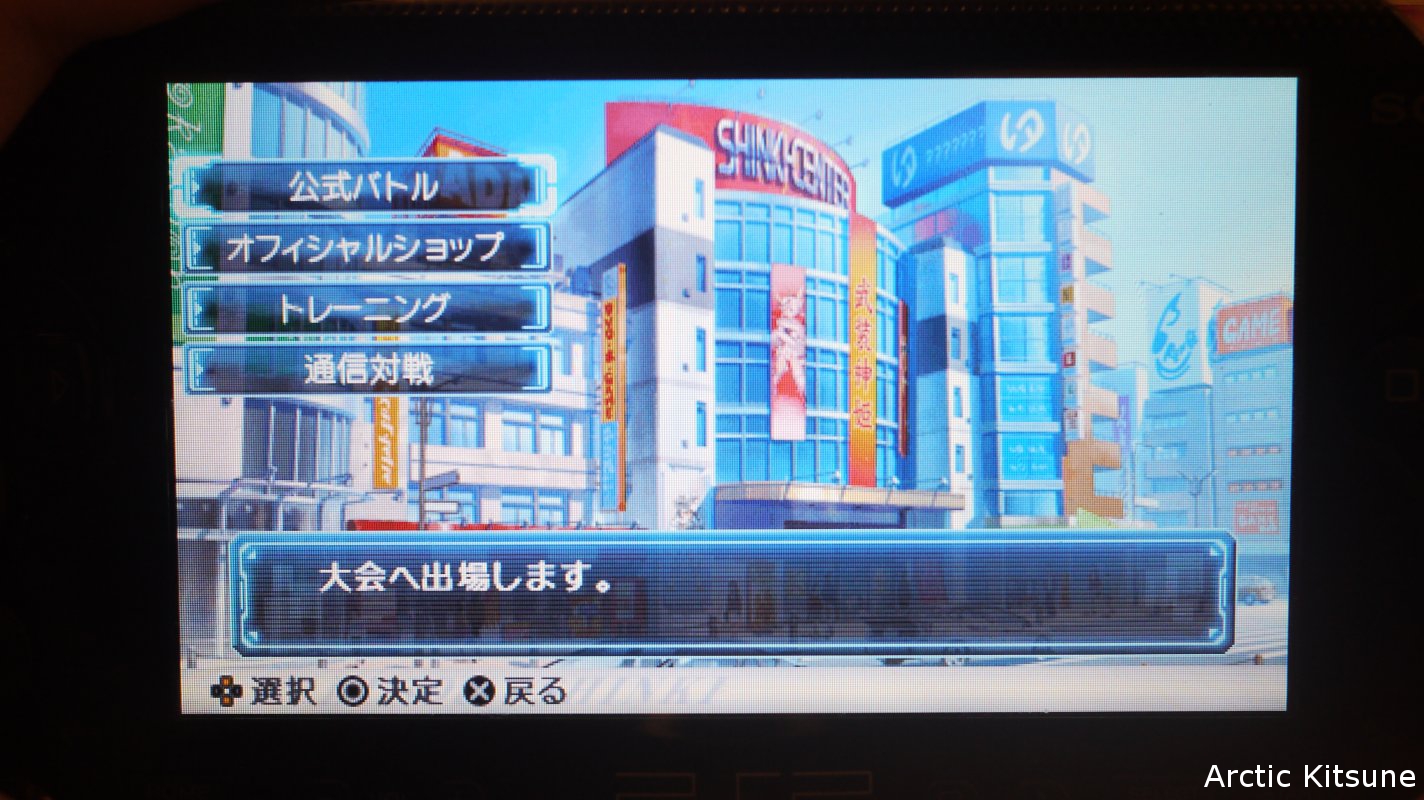 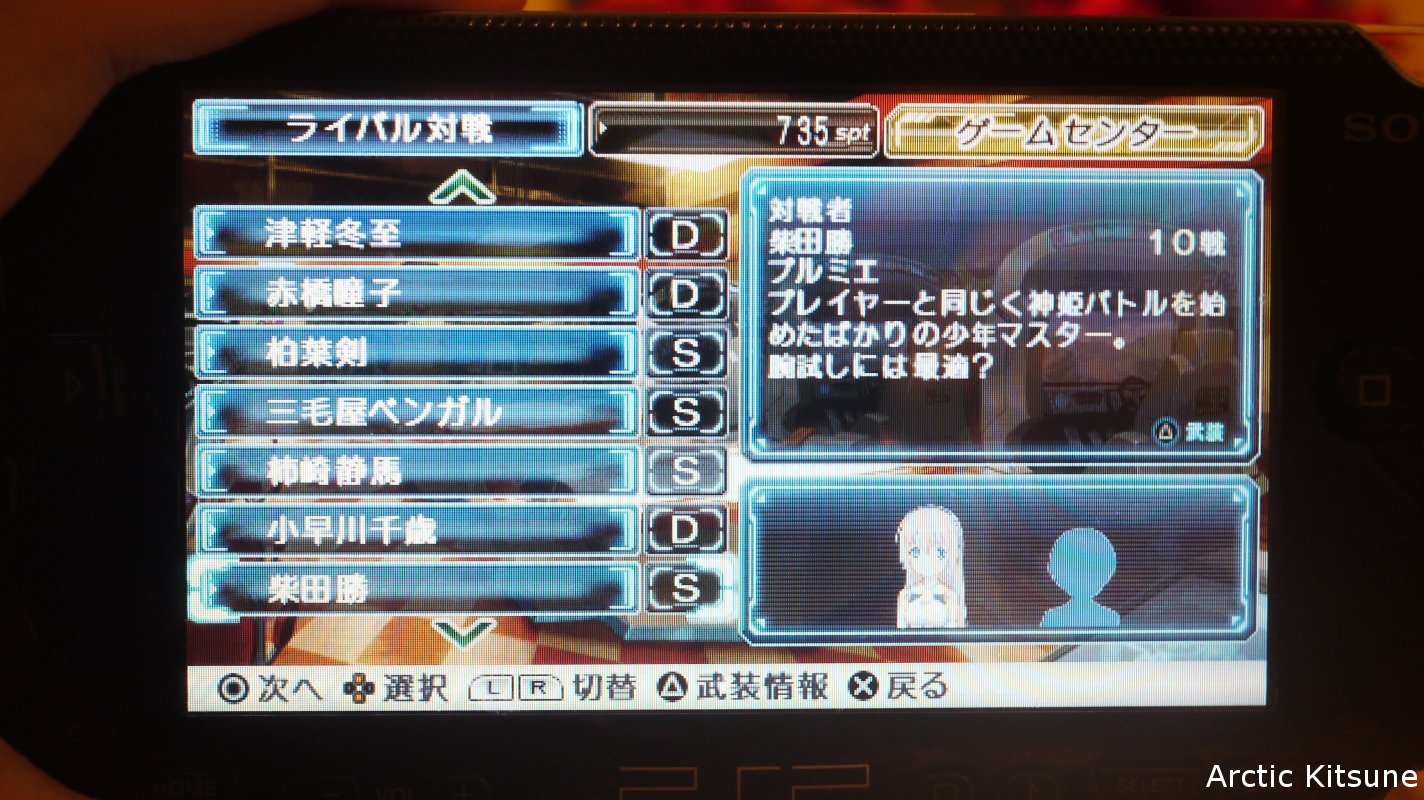 (Link – MySite) – The Arcade – The area you fight other opponents. Your first battle results get recorded. 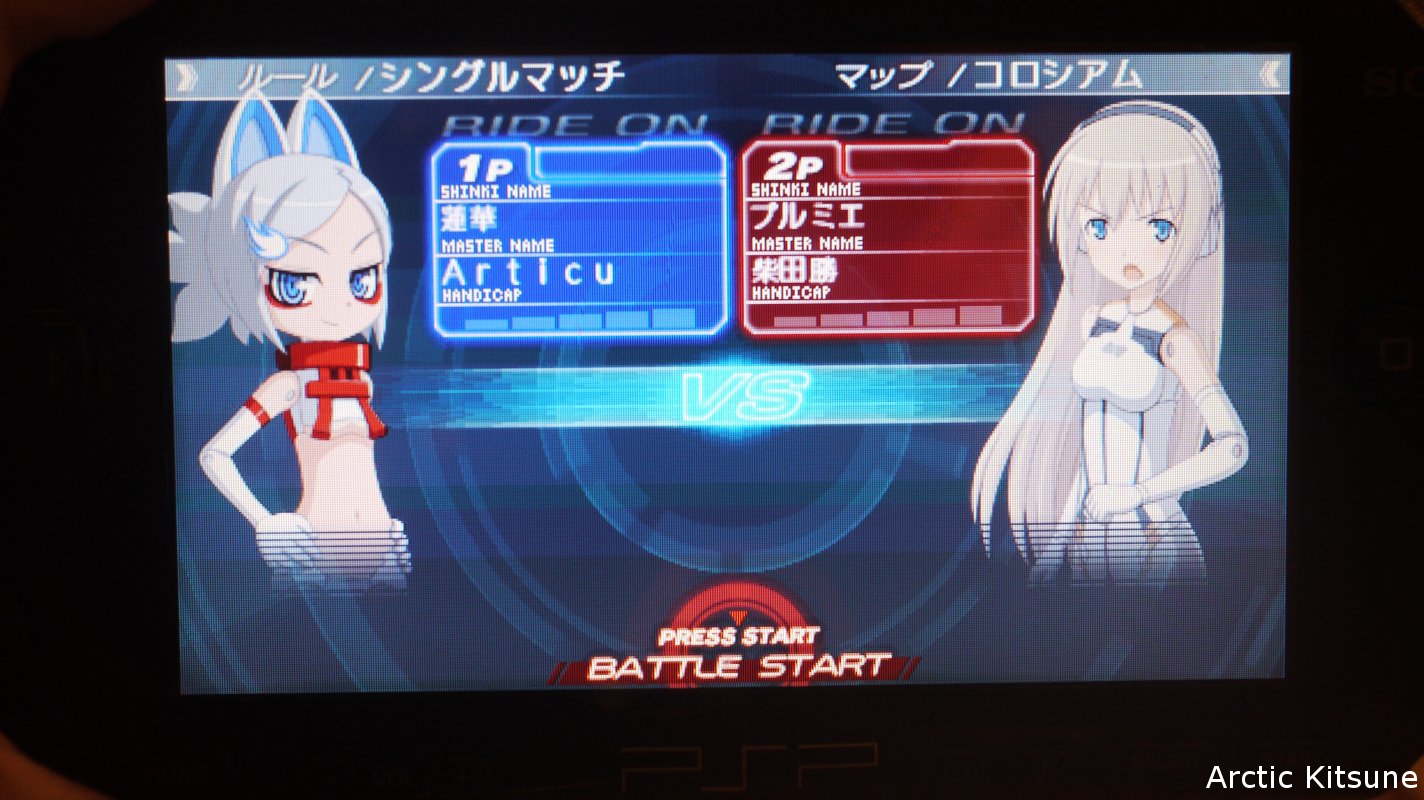 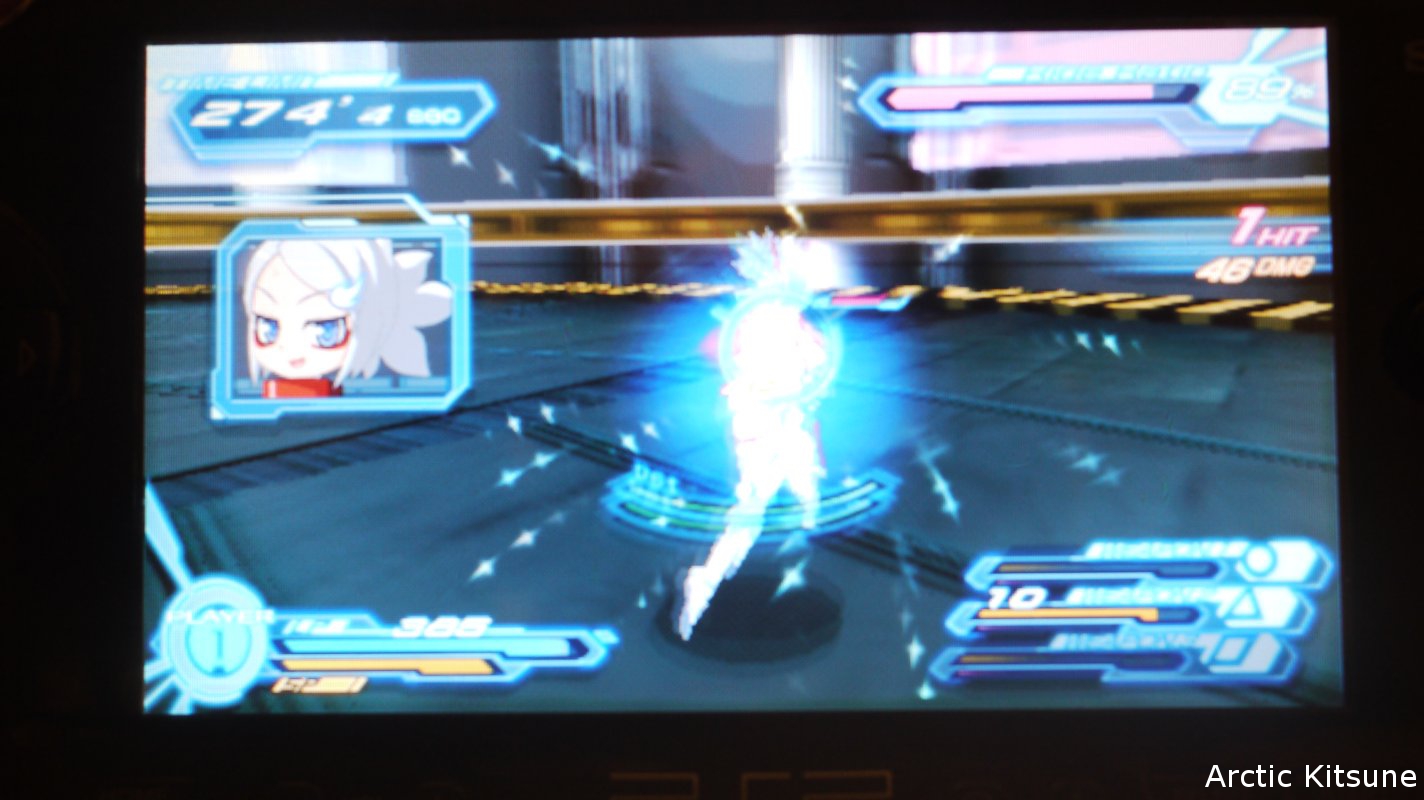 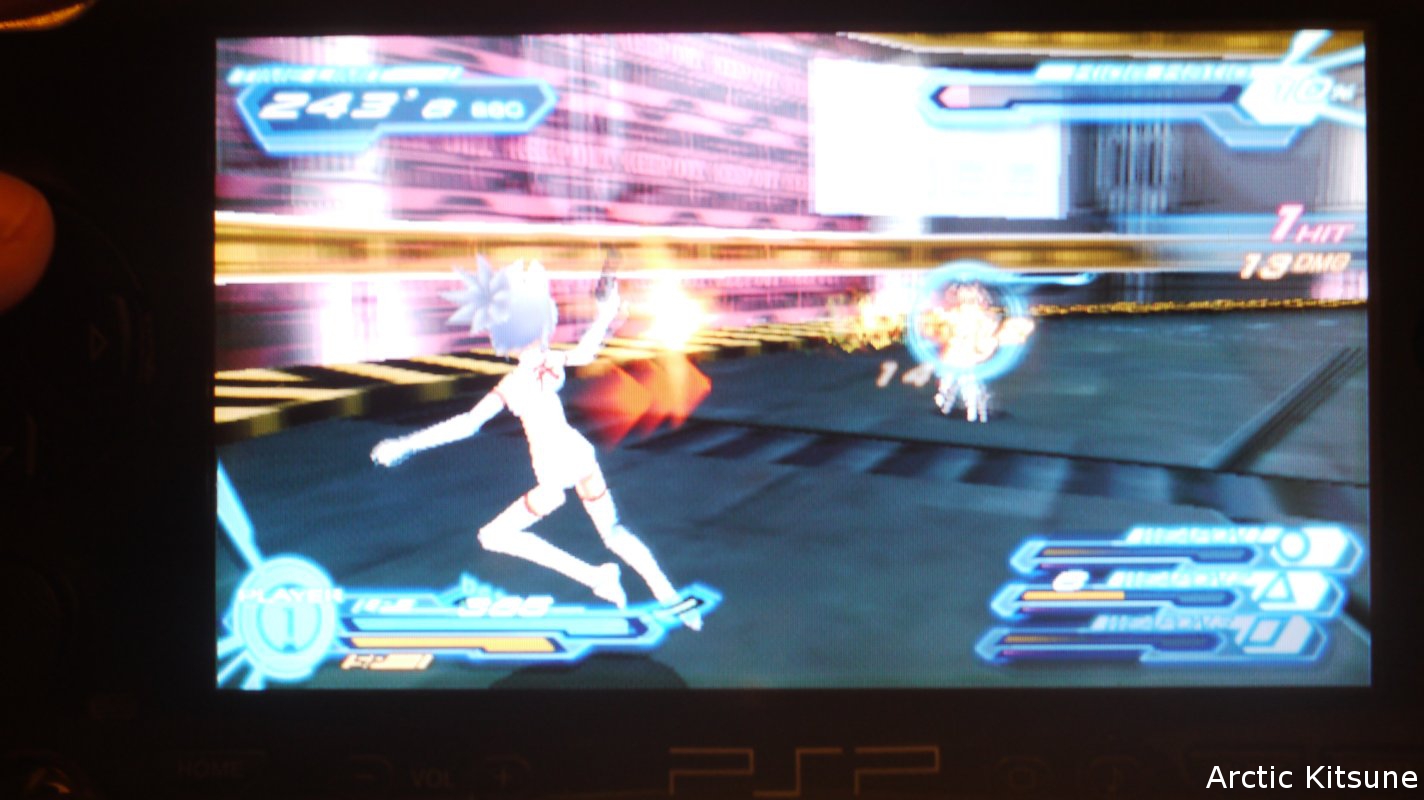 (Link – MySite) – Because Renge doesn’t have her armor she had to borrow stuff from Arnval. Expensive!

I would like to suggest that you don’t get cocky when challenging the next Shinki’s in line to battle. Some are easy and others are brutally dangerous! I’m still trying to find the “fine-line” of where the AI stands in this game and how it behaves. 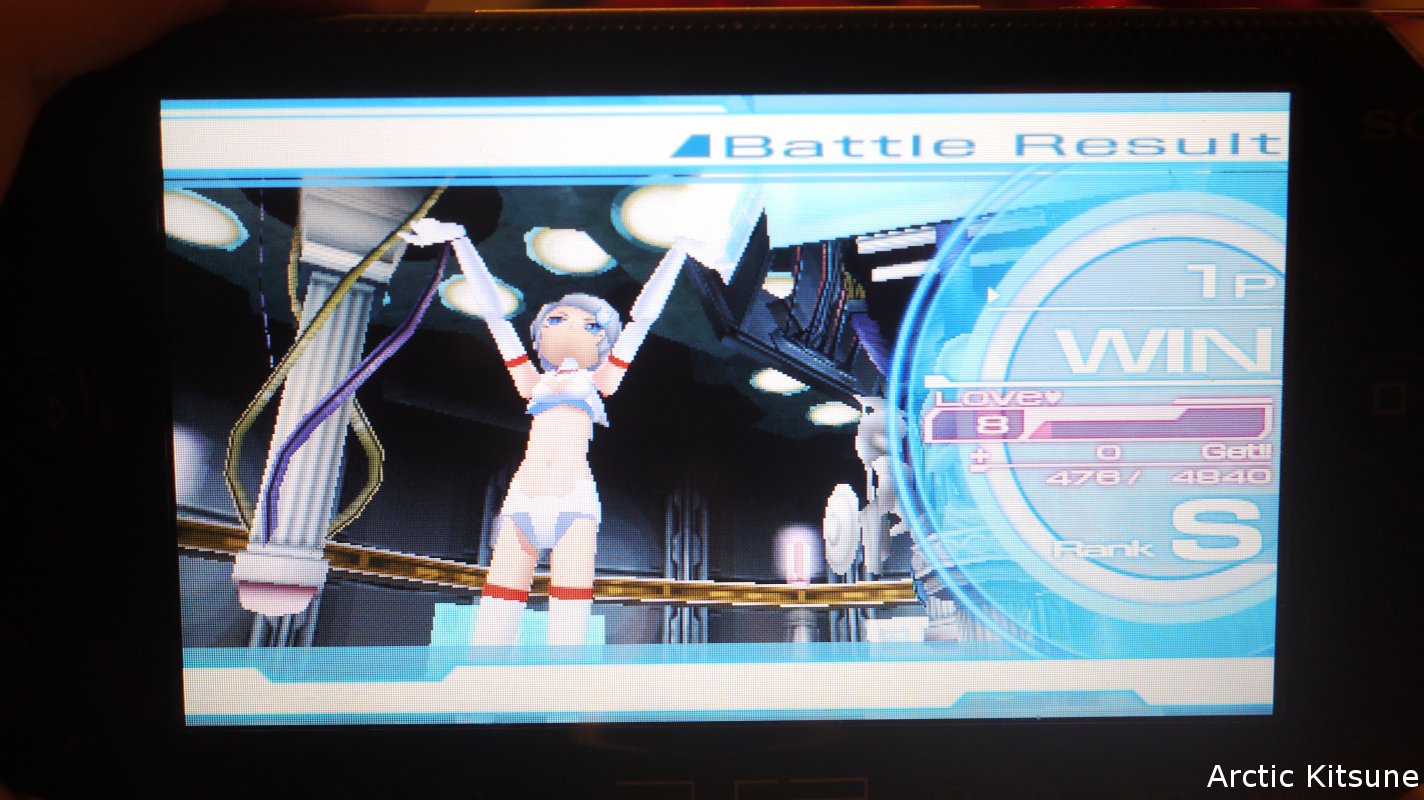 I love this game. This, and all the Gundam Arcade games I had for the PS2. There is this unique beauty that can only be found in these type of games that reaches to you. Also, such a game element is great when you’re on the go, or just mobile/active. Or maybe you just don’t like sitting in your room and prefer to sit outside? For those that have the second or new gen PSP’s could try plugging this game into a TV for larger viewing.

The “story” just started on my side so I might have to end up editing that in a bit later to tell you how it is. Thats if the Japanese stays within my brutally basic skill level for me to comment on. But I do have Arnval being polite and commenting about mine and opponent’s pre/after-battle remarks. She even takes me to the side and starts commenting about battles and how things are. Just like in Battle Rondo! There is ad-hoc multiplayer mode (I was told) that I have yet to try out.

The battles are X vs X (max 4 on field) and can be of various types. The “arcade” has 1 vs 1 while the arena in the shopping district has tag teams. There is also the coliseum/tournament which I have yet to get to. The battles are nice, but somewhat dislike grinding for points to move on. I’d prefer grinding at randomly generated ones than preset ones. Maybe that changes in MK 2?

As for Shinki’s themselves, they’re awesome in this game. Each and every one has their own personality within the game. Arnval is kind and helpful while Renge is more of a lecturing and taunting fox type. The in-battle portraits brings life to the game. The designs are well done and expected for a PSP. And as mentioned, Shinki’s that came with the game have a story while those added on don’t (i.e Renge).

– The game mechanics are pleasing and straight to the point. You can tell where your room, arcade, shop, and such are at without getting lost even after language barriers.
– The in-battle Shinki portaits adds life to the battles, just like in Gundam UC 0081 (PS3). Shinki’s comment in real time about how well or poorly you’re doing and even start crying when defeated.
– It appears you can customize your Shinki’s in the same way you could in the Battle Rondo MMO. Theres extra “accessories” similar to those from the cash shop on shinki.net.
– The tag team battles are hell of a lot of fun. You, an NPC, vs two other Shinki opponents brings out the full joy of the Busou Shinki battles.
– The way the Shinki’s interact with the player brings a smile to my face. Also, the way Renge behaves is just as amusing as the tag team battles in the shopping district area. Her actions and the crazy way they behave has a comical effect on those playing the game. Adds more life!
– I like how Konami is giving the option to add more accessories into the game after release. I hope this keeps up as it adds more life into the game itself.
– Controls are nice and simple! D-pad to move, X to jump, cirlce + Triangle + square to attack, Left pad to lock on and right pad to shield. I’d love to figure out how to use specials though.
– You can choose different paint schemed Busou Shinkis from the shop. I.e Renge can come in her original gray or the light pink or light blue. This is just another one of those customizations.
– I like this PSP version over Rondo just because you aren’t forced into playing it as you would be for Rondo. If you stop playing on Rondo your account is then at risk of being deleted, your shinki’s lose affection, and you don’t level them up as much.

– Add-on characters don’t have a story. They don’t even have a static portrait before or after the battles.
– Just hearing the word “ad-hoc” is annoying. The game should let us connect to other PSP’s without using a host server.
– Repetition can kill a game easily. I’d like it if there was random opponent generators in the arcade or shopping district or other game modes of some sort. Pokemon seems to be adding more meaning Konami could try it as well if they haven’t.
– Where is Kohiru and Benio? They’re MIA! Even older game characters are MIA from both Rondo and Battle Masters!
– Payware add-ons are expensive. Renge costed a lot leaving me 400 yen which won’t allow me to buy armor. Need another Japanese PSN card to obtain Renge’s armor which is 1000 yen. Expensive buggers!
– I kind of dislike the PSP version when compared to Rondo due to the whole automated battles or the conversations you have online.

I’d recommend this game to those wanting to brawl on the go, or to have a Shinki companion! Or you can wait till Summer 2011 to get the second game giving add-on characters their stories. The second game will also read off the main save file from the first.

Whatever your choice, hope you enjoy this or other games!