Hello folks! Gave the Gundam game a whirl after downloading it from the Japanese PSN a few days ago. Quite a nice game with great potential. 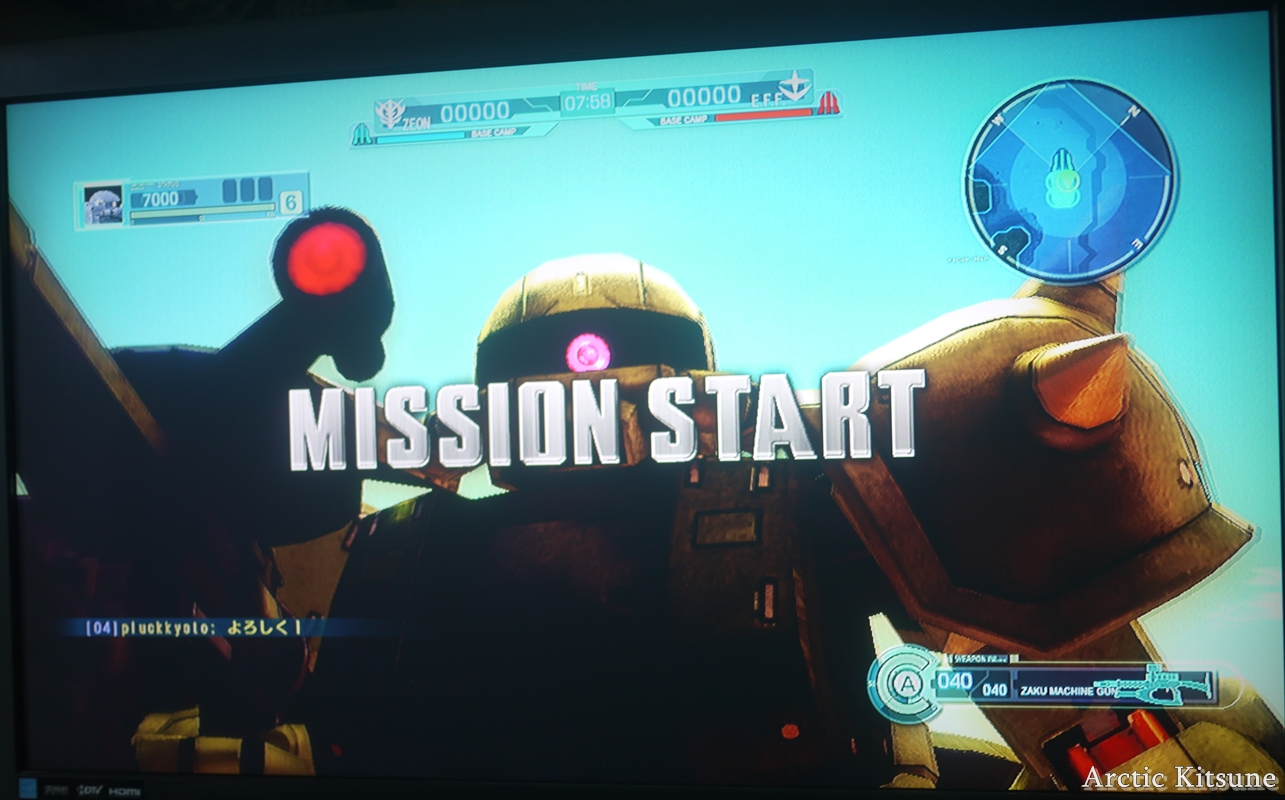 (Link – MySite) – Let us get the party started!

Mobile Suit Gundam battle Operation is a Japanese Battlefield (1942, Vietnam, 2 & 3) inspired game for the playstation 3. This game obviously features mobile suits from the 1 year war in which the Zeons declared war on the Earth Federation Forces, with us taking the roles of said soldiers to claim territory for either side.

It is a free game you can snag from the Japanese PSN if you have access to such.

(Note: Just to let you know off the bat that I can’t jump up nor jump over obstacles. I’ve seen other players do such yet I keep struggling in figuring out how, even after my second session.) 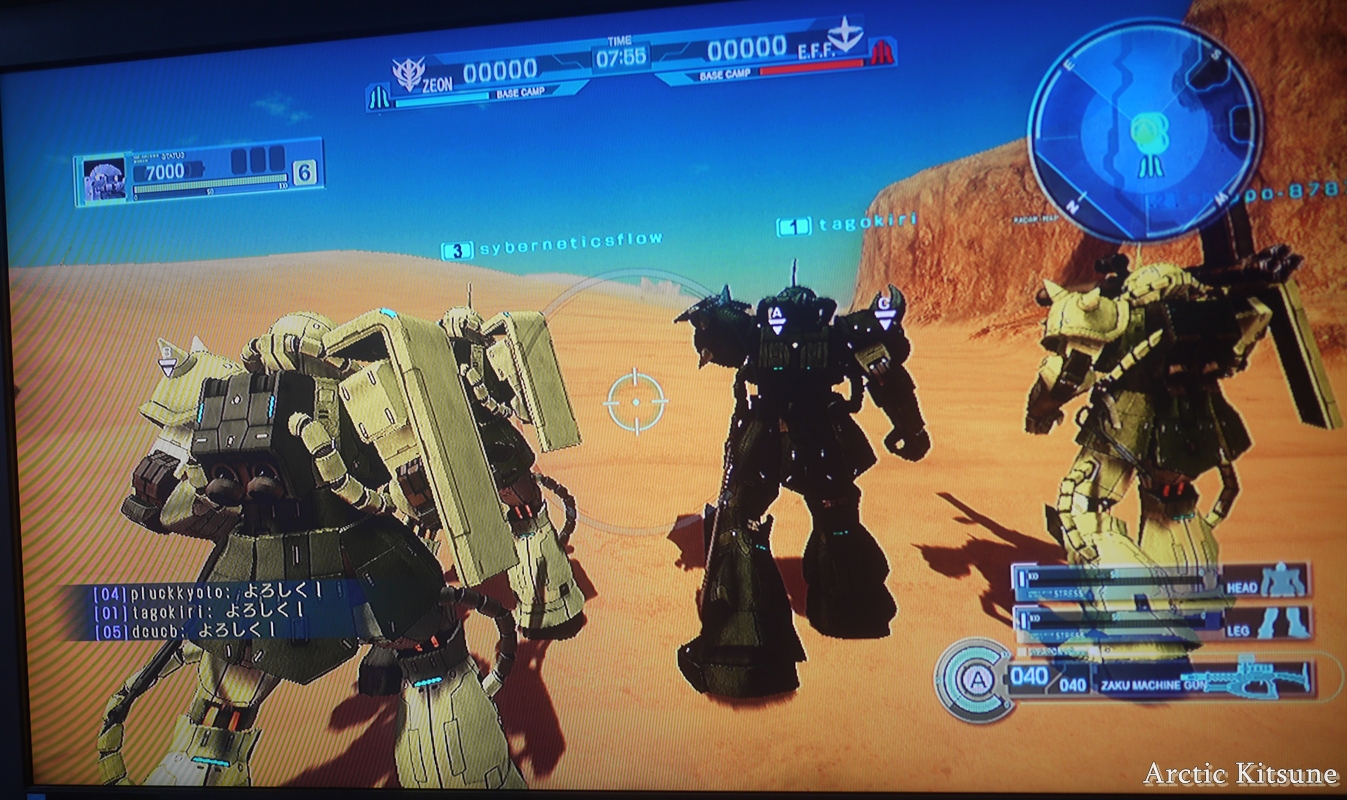 From the main menu your first option is to simply fight it out with other folks. You may quick join and custom search for those game rooms to battle in. If that isn’t your thing then you may simply host a game room to find those that may want to fight on your terms.

Once you’re in you may wait for the games to start, customize, or check out other options without really hopping out. I find this familiar to Gundam Senki’s menus. When equal amounts of players join the room you will be placed into a fight – Zeons vs Feddies – to either win or lose. You may choose to fight it out, take over command points, or both to win the battle. And just like EA’s Battlefield you may even jump into tanks, hop out of your mecha/tank, or even hitch a ride with a fellow pilot.

During battle you can choose three weapons, cycling them with R2 and firing with R1. You will also take damage from the head to crotch for main-body damage and crotch to foot down for mobility damage. When your legs are destroyed you’ll have great difficulty moving, let alone walking. You’re basically a sitting duck so eject and hitch a ride from a fellow pilot! Careful not to get naded or stepped on!

You may also crouch, kneel, and even go prone with your mobile suits. This should help or hinder your survival chance!

Once you’ve successfully survived till the result screen without being booted you will be escorted to your EXP screen. There you’ll notice your stats going up, pilots ranking up along with mobile suit related goodies being unlocked and researched. You will also gain points to spend on the stuff being developed so keep an eye on them!

With any mobile suit out there you should be able to customize it to your liking. Want that upgraded weapons? If you had it developed then you may add it to your mobile suit. You just need to unlock it through development though.

-> Mobile suits: You may cycle through Zeon and Earth Feddie mobile suits and to customize them for the battlefield. It is yours so do take care! Make sure you have great mobile suits for both sides, unlike me who only went Zeon. Your choice in the end.

-> Medals: Any medals you gain will placed here. I have none so I can’t brag at the moment. 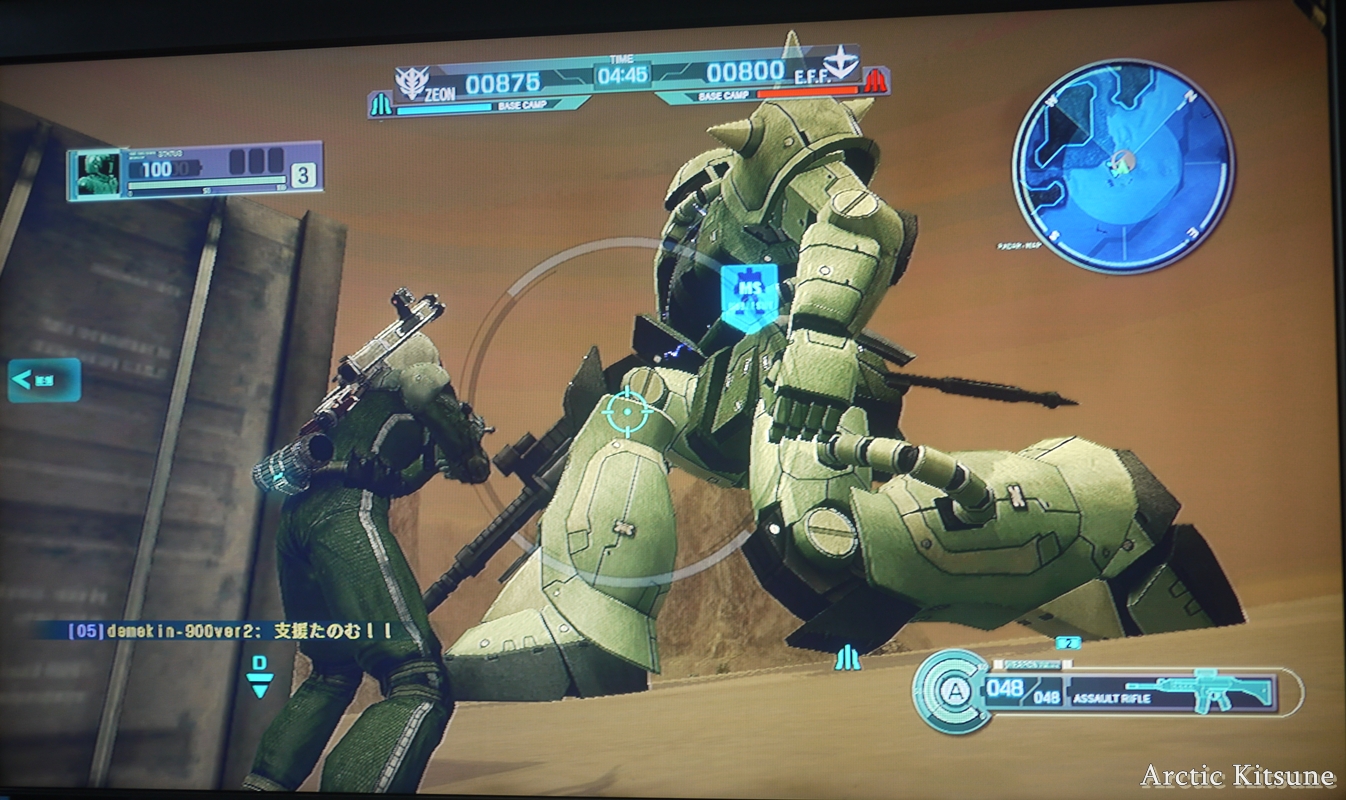 (Link – MySite) – What I love the most about this game.

What I love the most is how you may eject from the mobile suit and flee, pissing the enemy off a bit that he or she didn’t get your kill count. Don’t hang around because they will step on you and throw ‘nades at you! I want to see more Gundam games using this cockpit feature that Battle Operations has! We need an updated game to make it realistic and awesome.

I don’t give a crap if its budget issues or not, we need more tactical realistic Gundam games like this and Battle Records!

This is where you’ll find mobile suits, weapons, shields, and parts for purchase. Whatever you research will be found here along with the ability to find new parts to upgrade with. Spend those points wisely!

-> Online Shop: Access to the J-PSN for more Gundam goodies! Can’t do it from other region PSNs obviously.

-> MS: All the mobile suits that are being researched and built for you will be found here. You may purchase when it is done.

-> Weapons: All your weapons may be found here just like the MS.

-> Custom Parts: Basically chips, parts, cables, and the like to enhance the mobile suit of yours.

-> Decals: When you rank high enough you’ll be able to place decals onto your mobile suit.

I’ll keep this part simple by saying all your statistical goodies are listed here. Everything you do online is listed here for you to see. You can see how many opponents you defeated, what side you play the most and etc. 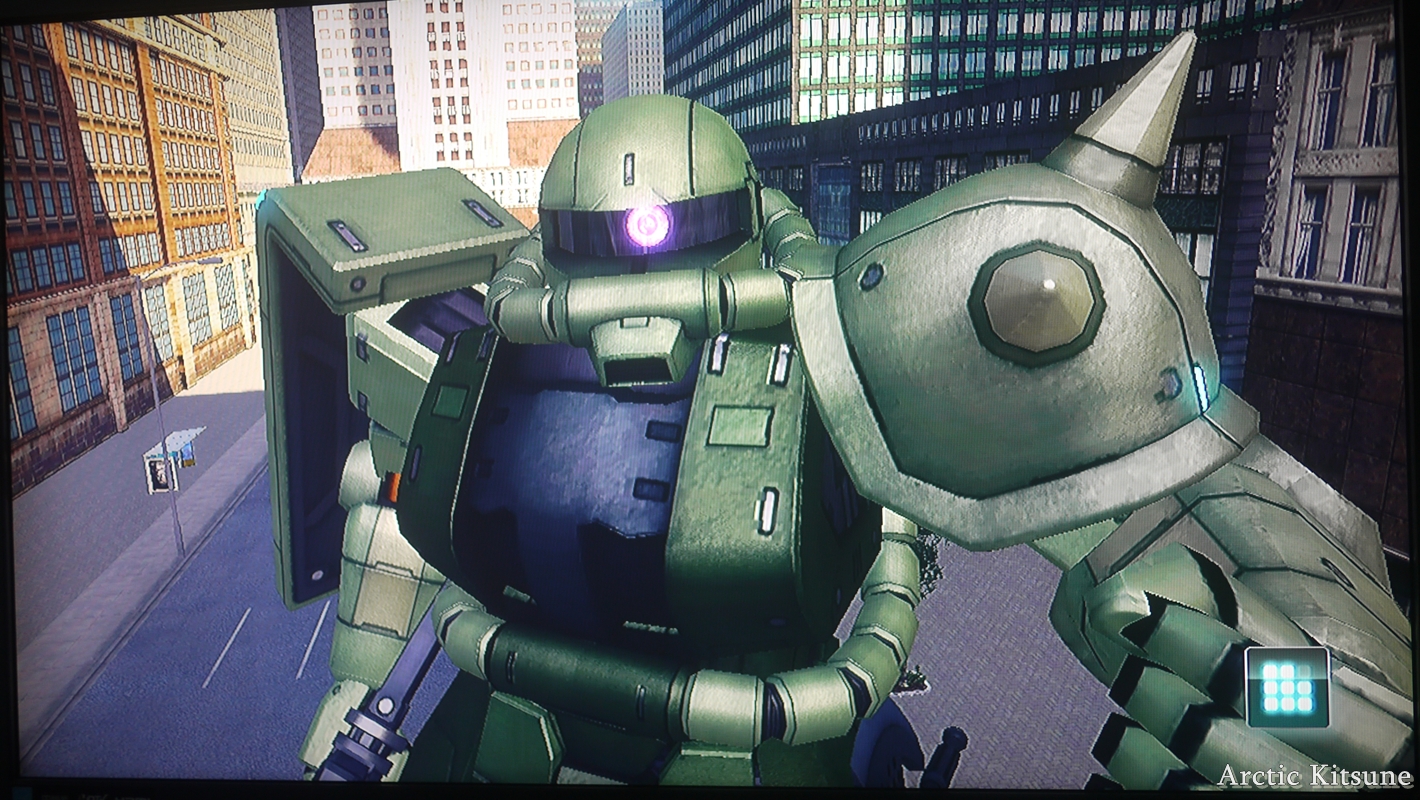 The graphics of this game is actually on-par with the PS3 Gundam Senki UC 0081 (PS3) game if I do say so myself. That is obviously a good thing because both that and this game look beautiful! You can see every little detail on your mobile suit, great cockpit detailing, damage effects, and the like. I found no real flaws with the graphics. I love how my Zaku II has those night-lights lit up on the shoulder and the legs, nice touch.When it starts up or sits down everything fits as it should and I actually like that instead of units popping in or being static.

When you’re in in infantry mode (outside of mobile suit) you look, behave, and move as you should.

The game also advertises itself in the city maps through a billboard on a building which I found somewhat amusing.

Because I love Gundam I just had to pick up this MMO. Well, not from the start but I did get into it. I’ve been poked and prodded to try it yet wasn’t interested at the time due to other things hogging my attention. Also apologies to that one person I ignored who suggested I’d check this out.

Either way I can now say I played this game and that I find it fun, especially when I don’t get booted, disconnected, 1-sided destroyed, out-tiered or all of the above at once. I will also admit that I’m a total newbie at it (not so much thanks to me playing most of the Gundam games) thanks to the language barrier and the stiff controls. Since I just got into it I can’t do well enough to the point where it becomes insanely frustrating. To add insult to injury I keep being placed into higher-tiered game-rooms where I simply don’t stand a *beeping* chance! When I DO find a playable game-room things are very enjoyable to the point where I want to play another round *gets booted*.

Because of how Gundam Crossfire (PS3) did in America I’m going to assume Americans are xenophobic of anything to do with Gundam, meaning that you won’t see Gundam in North America. If you mass-petition or show that you’re interested in Gundam that “might” help. Either way you can grab it for free and play it with other people playing it. Being free, it has more than enough features to keep you occupied….if you can play it on stable game-rooms. I had two sessions already stretching my patience just a bit with the constant hiccups and miss-match ups.

– In short: Go pick it up if you have a J-PSN account! Its free so why not. Try it and look for a room with 3 bars or more in custom search! I recommend it if you’re a Gundam fan. If not, go pick up Gundam Senki UC 0081 Battle Records for PS3 instead because it adds more and has both single & multi modes. More freedom minus kneeling.

– Free!
– Nice looking mobile suits with great detail. Everything looks awesome.
– You can enter and exit mobile suit and vehicles which adds a whole new dimension to the Gundam games which is mostly overlooked in past games.
– You feel a great sense of achievement when you take down an enemy because of how difficult it is to aim, pilot, and get a disconnecting/booting-free session.
– Everything is simple and to the point. You can figure things out with little fiddling.
– Your mechas take damage from torso up & crotch down. When your legs are destroyed you can’t move, much.

– Constant disconnecting and booting! Absolutely frustrating.
– Foreigners will experience major lag when choosing the wrong host. Anything with 2 bars and below will be highly laggy! Choose carefully.
– Lacking official rooms and single-player missions (me being picky).
– Constantly places me in higher-tier games instead of ones in my own tier.
– Meleeing is a chore; When you try to melee units its truly frustrating, but when it connects and does damage it is awesome. Otherwise, needs tweaking because mobile suits can move quicker than that.

I’m loving this free Gundam game, when it works. This shall be my “World of Tanks” game because I just love my Gundam! But I will wish that Bandai would release an actual free-roaming game where you just do as you wish in both Earth and space with mobile suit kneeling and such.

Got some nice memorable kills already – 1) First battle I took out a GM or two 2) Heat-hawked a GM to at a Zeon base before getting disconnected. We both got knocked down and I won.

Thanks for viewing! If you think I forgot anything then do remind me and I’ll make room in this article for it! Enjoy your Gundam-ing!