Hello folks! Never thought I would purchase more Figmas after keeping to the Busou Shinki realm. I purchased Eila once Ken_Works mentioned the Finnish Embassy in Tokyo celebrated Eila’s birthday on both their Twitter & on their site & in Japanese.

Eila is from the manga & anime called Strike Witches within the 501st Joint Fighter Wing. She originates from Suomus (Finland) with a black fox familiar and with a white fox emblem.

She is based off the #1 Finnish ace pilot named Eino Illmar Juutilainen. Her striker unit is based on the “Messerschmitt BF-109 (G-2 & K-4). She is equipped with an MG42 machine gun.

As a “witch” with a fox familiar she can predict the future, just not fully. Such ability allows her to dodge and maneuver away from incoming projectiles. Because of her fox familiar – Black Fox – she can also outwit and prank those she may encounter.

She can often times be seen with Sanya, mostly in a “sisterly-love” situations sometimes boarding onto yuri-love.
Pst: She comes with a “holding-hand” that belongs to her and Sanya.

Debriefing aside, I obtained Eila because of the Finnish-Tokyo embassy birthday celebration and because her Figma was linked to me. Then there is that obvious reason of her being aligned with the – Black Fox – familiar and a white fox emblem. She is quite a prankster and can sing beautifully well.

Quite simple and to the point. I always do enjoy the rear examples, it inspires posing. Seeing Eila’s upper body and in a comically-embarrassed posing gives her that attraction when “window shopping”. 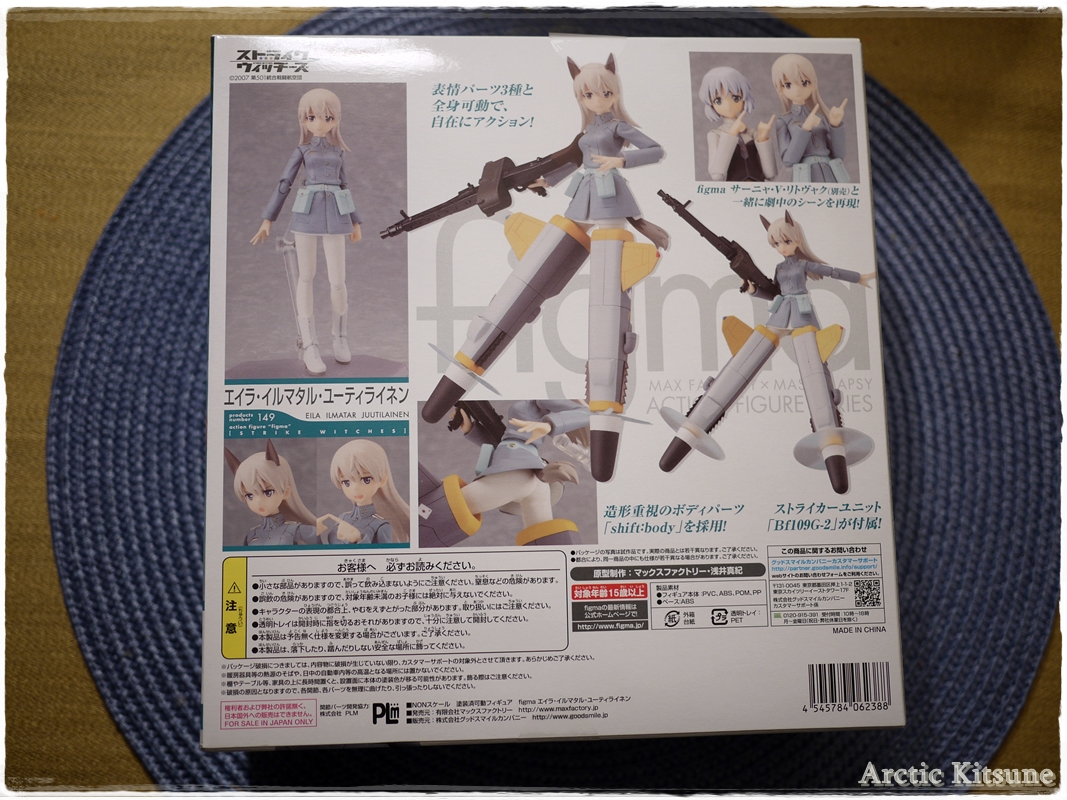 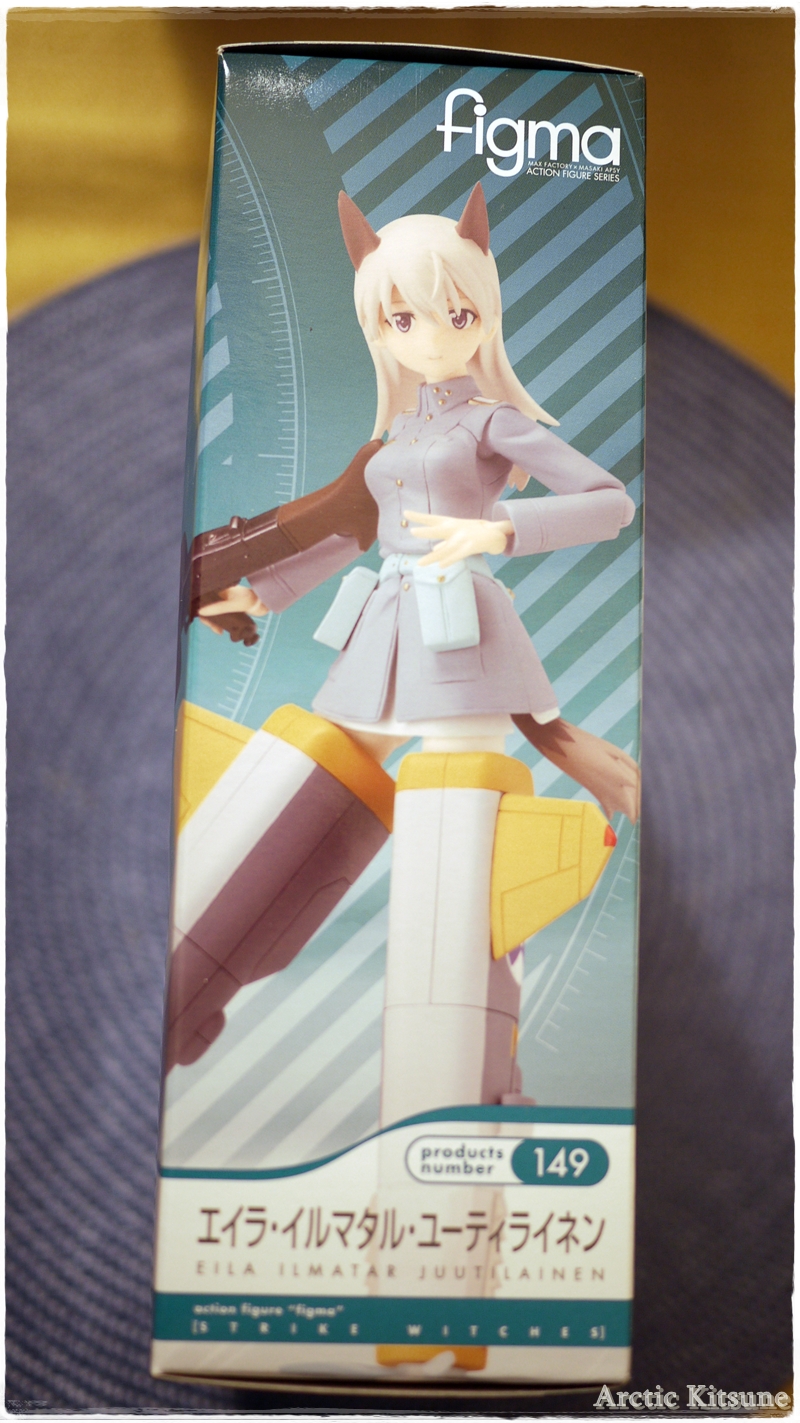 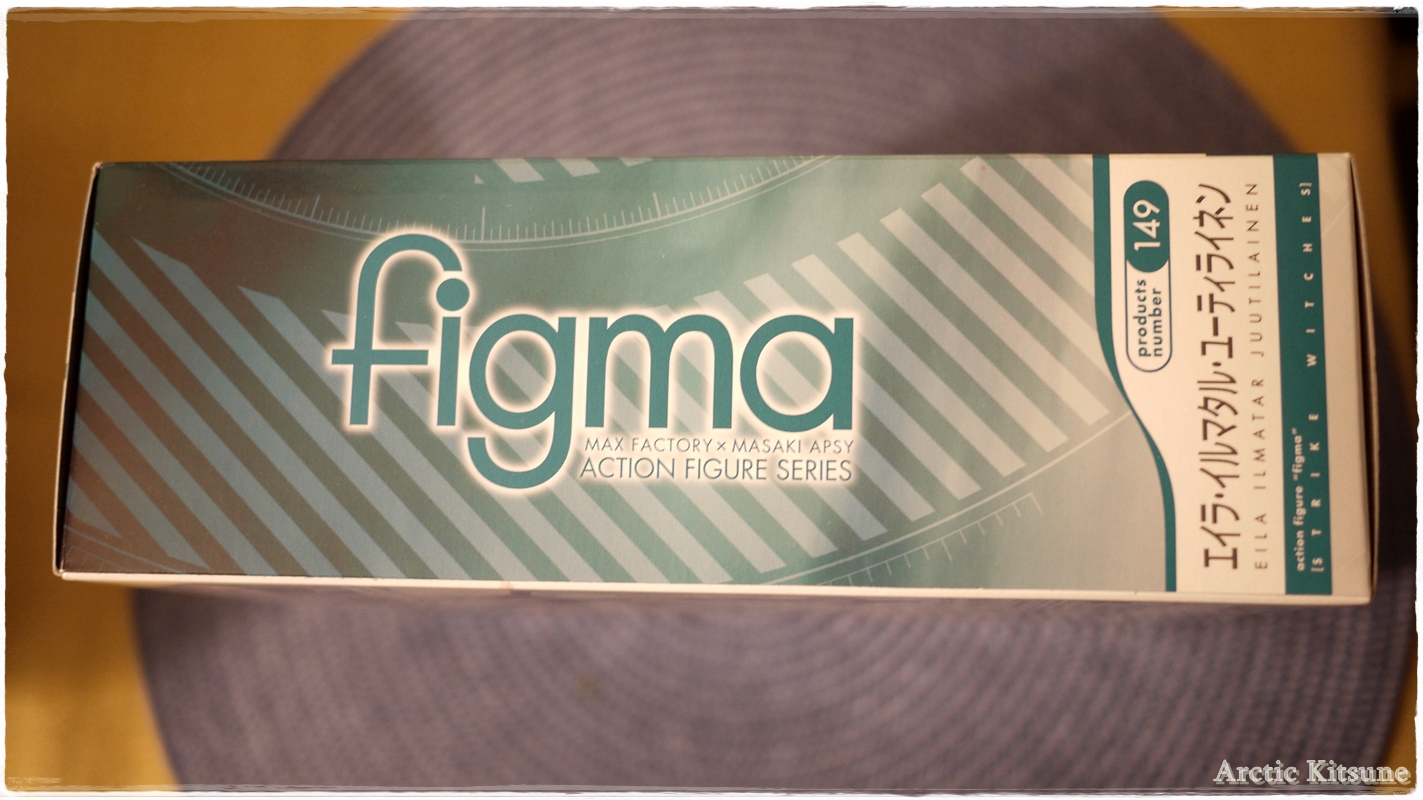 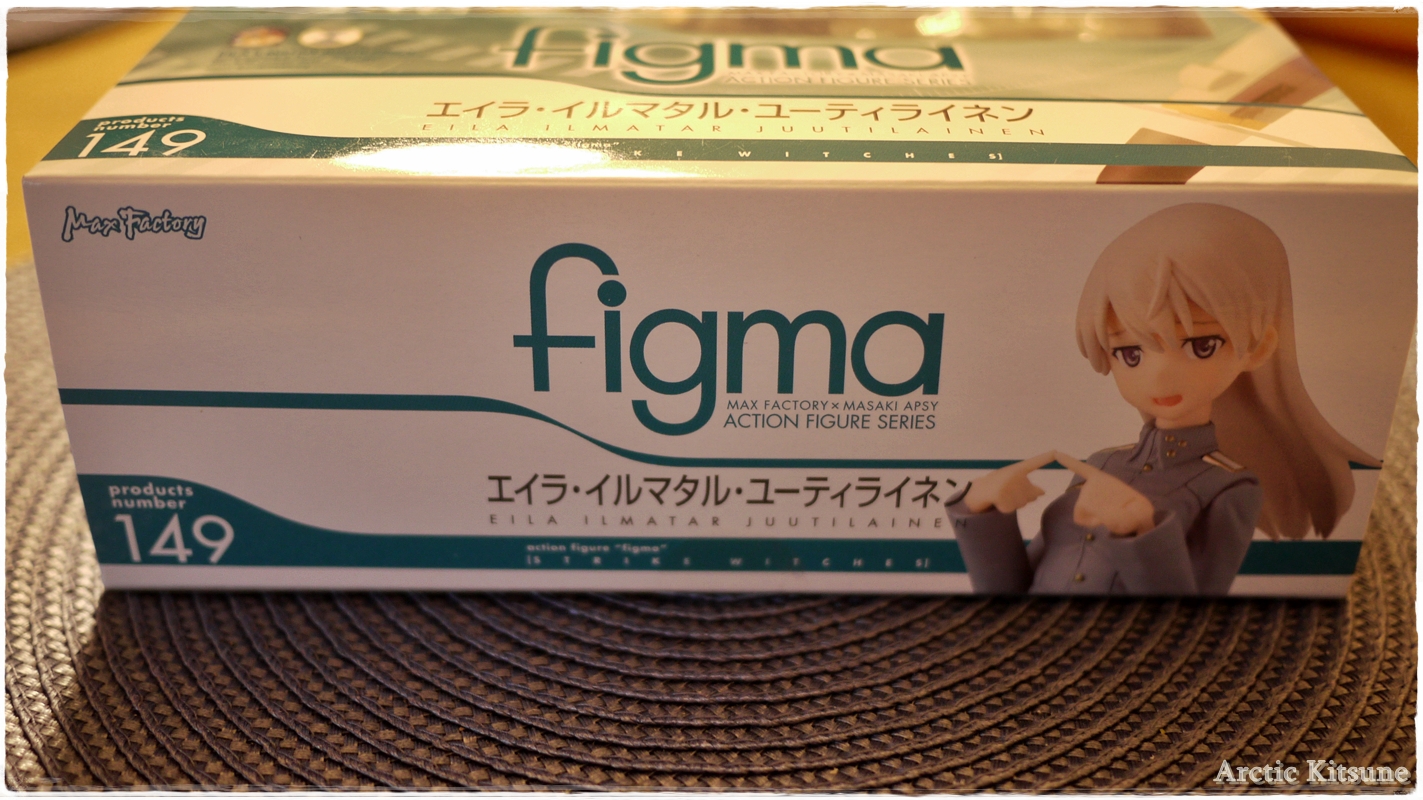 Eila in Figma form is actually quite nice and beautiful. A nice elegance to her in that form. She has posing freedom that other Figmas seem to lack, and behaves as you would expect. Her articulation gets my approval along with her posing variety. Her Strikers are quite a sight. I believe I can pair her up with Liberty to scout things out in later photoshoots.

I’m foreseeing her Striker and machine gun being “borrowed” by the other gals. I shall allow them to see how far it’ll go heh. 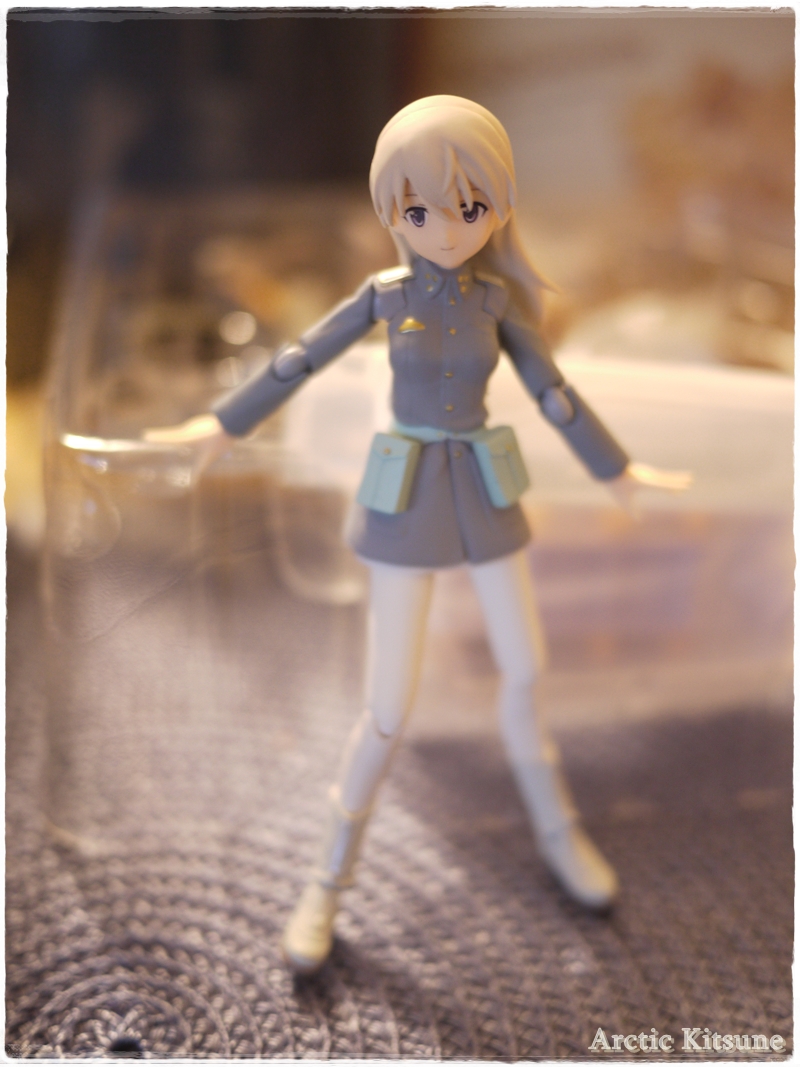 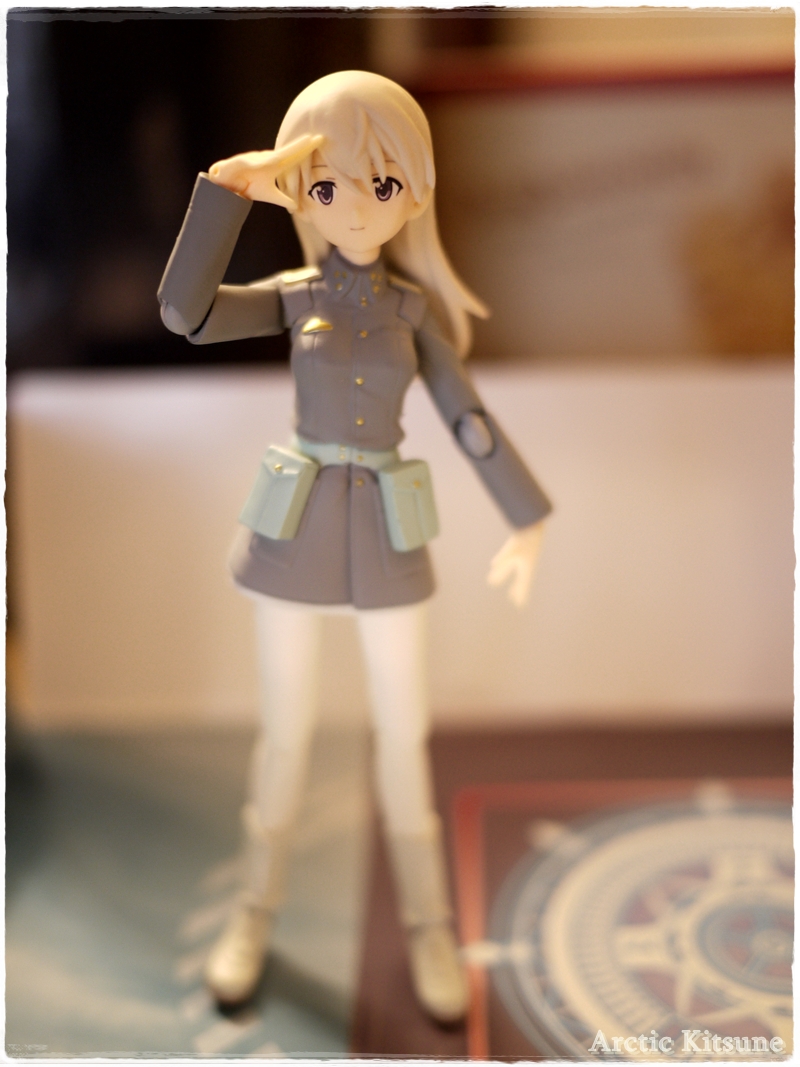 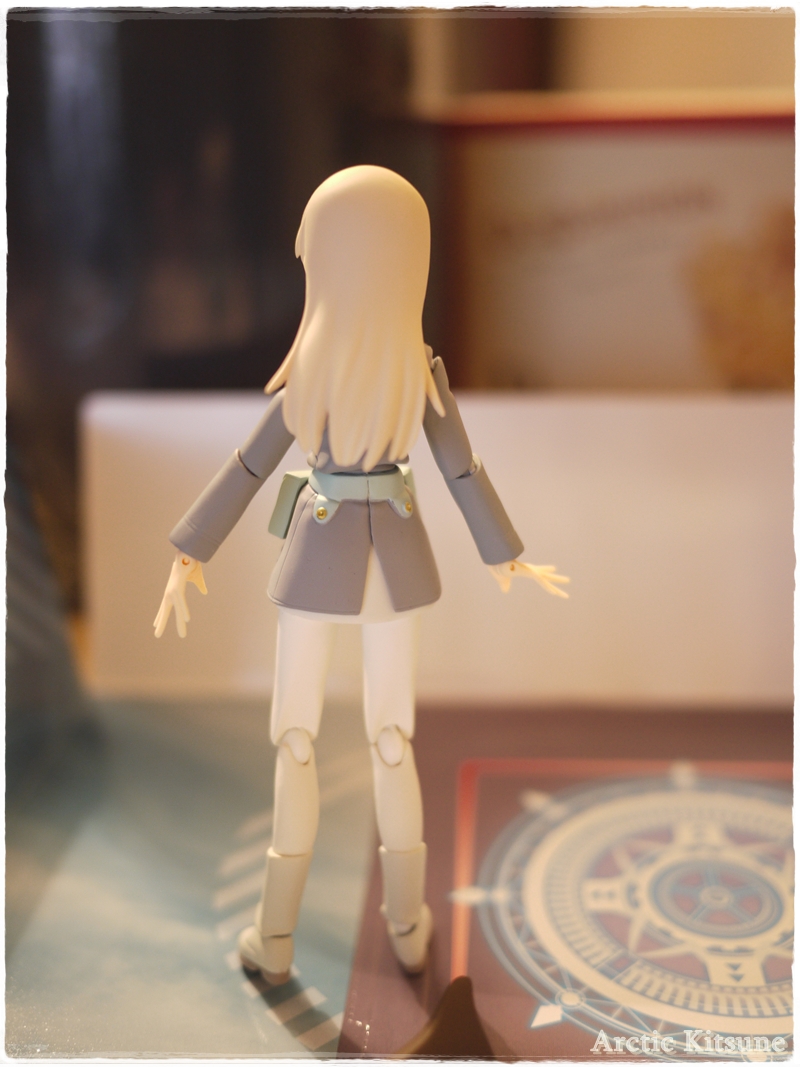 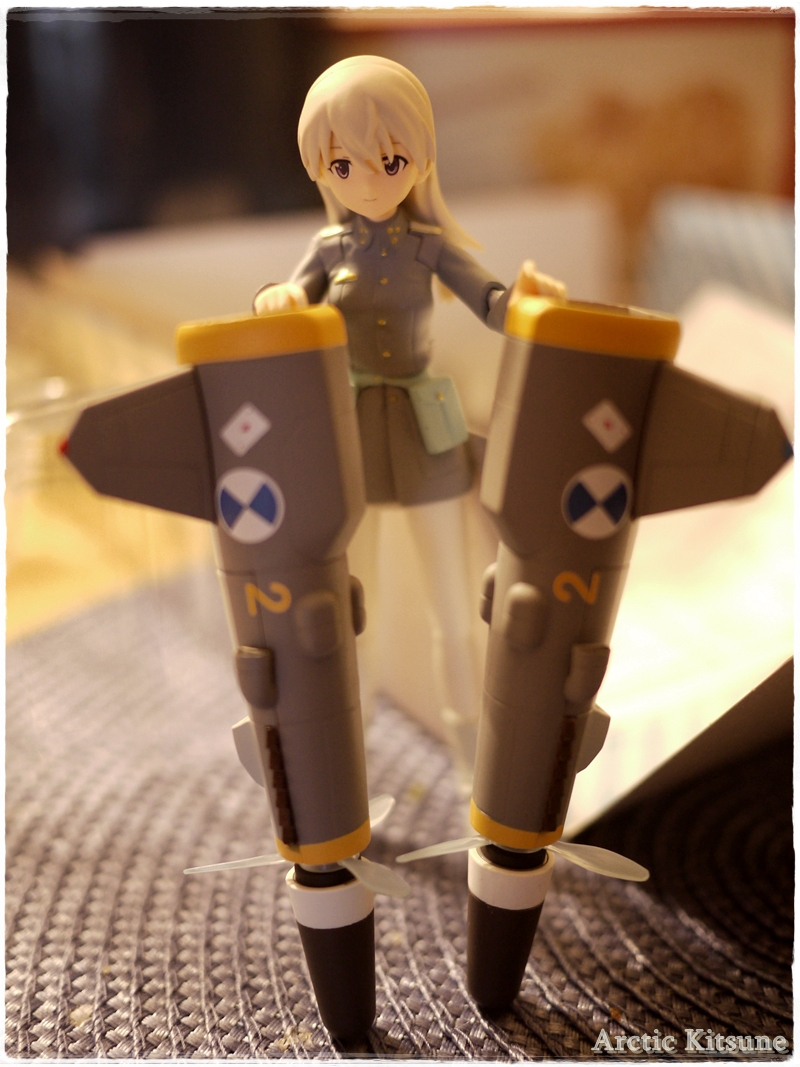 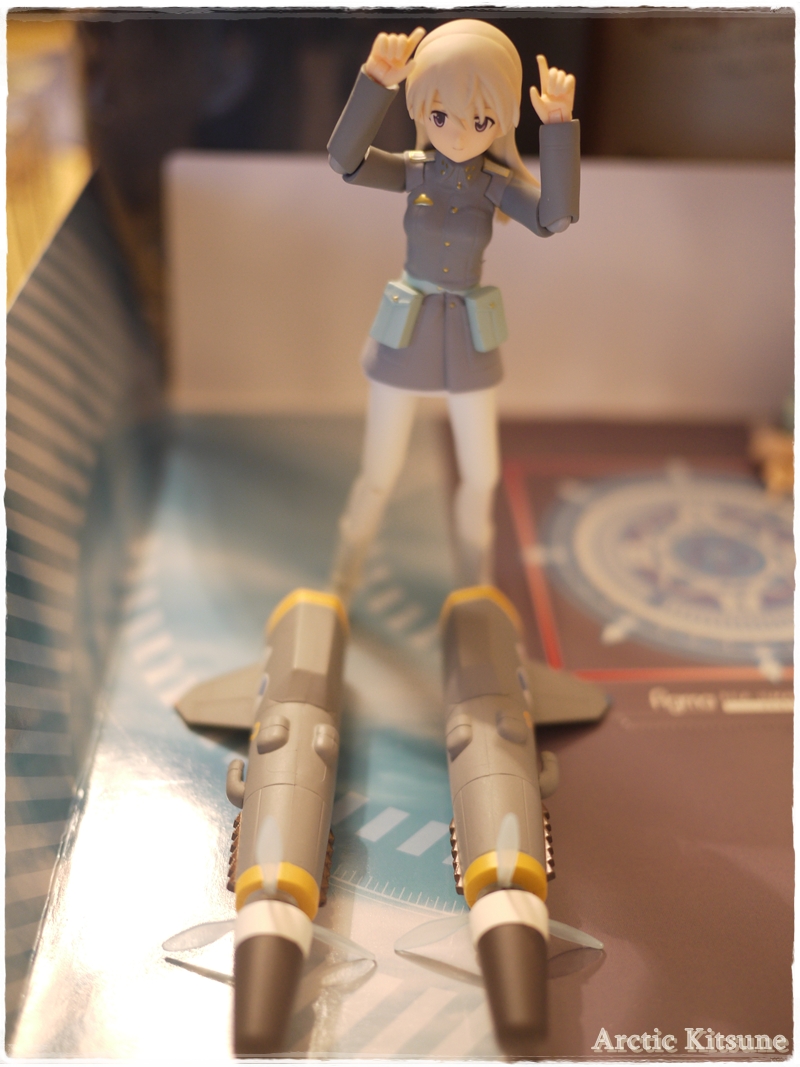 I would like to add that her skirt is soft and flexible, on both. You can move them around. The tail can be pegged onto both of her butts, just not so much on the “normal” version because the hole is a bit too wide or flexible (keep that joke in your mind please). It fits perfectly on the pre-posed, not so much on the normal one.

It even made me hold back on a joke that you guys seem to want to crack as well.

Some quick shots of Eila having fun while wearing her Striker unit. 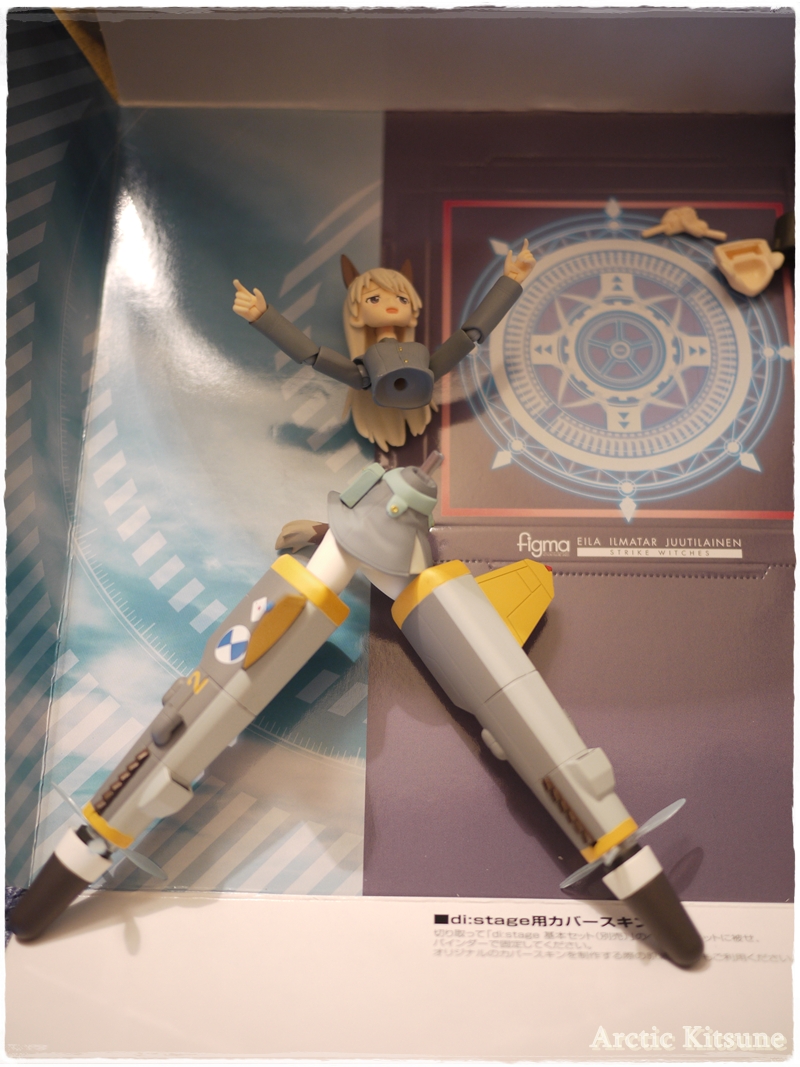 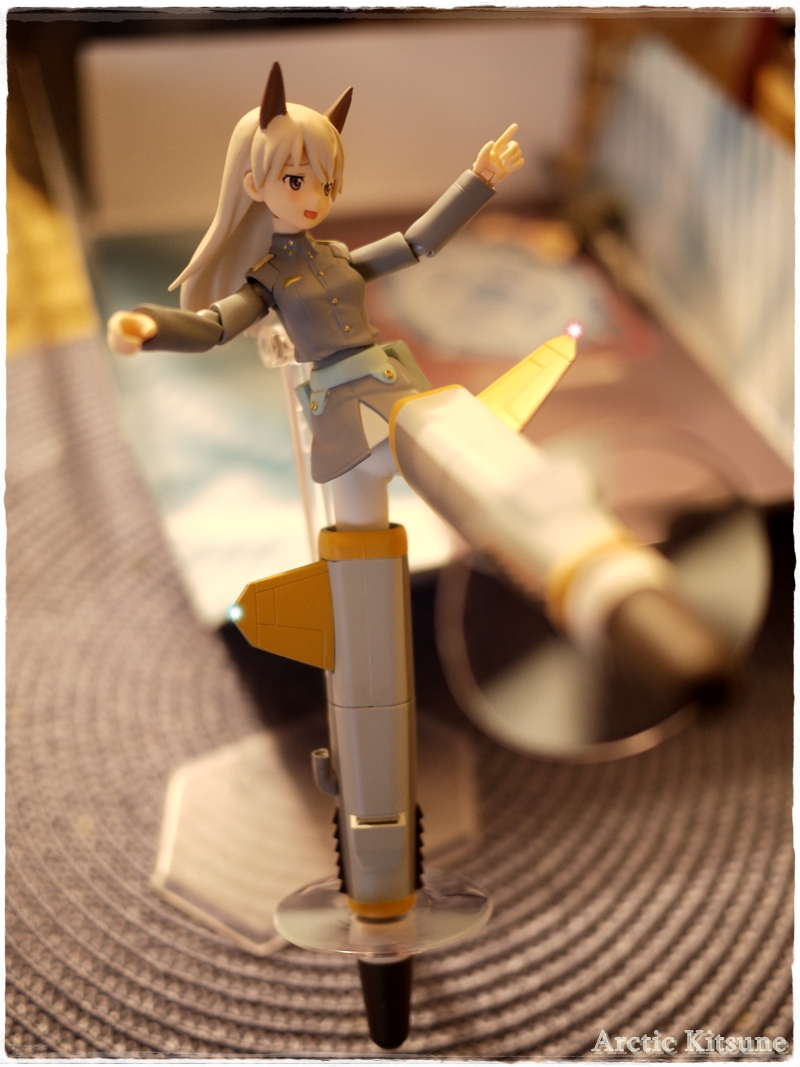 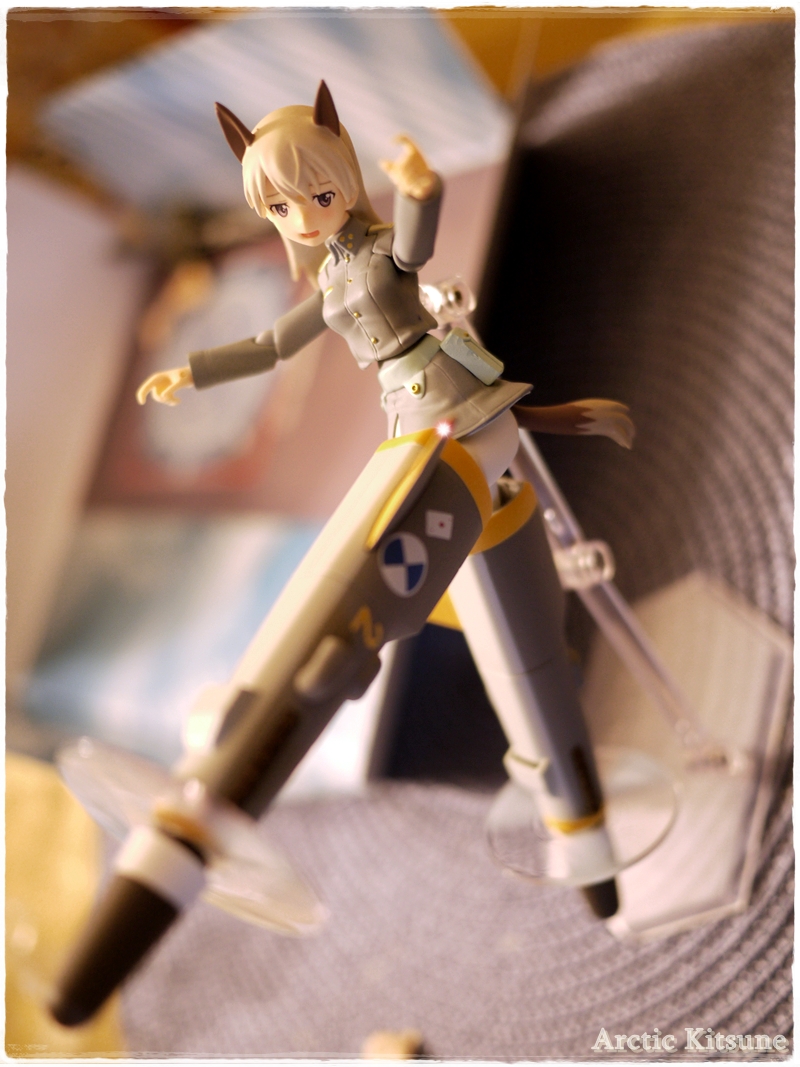 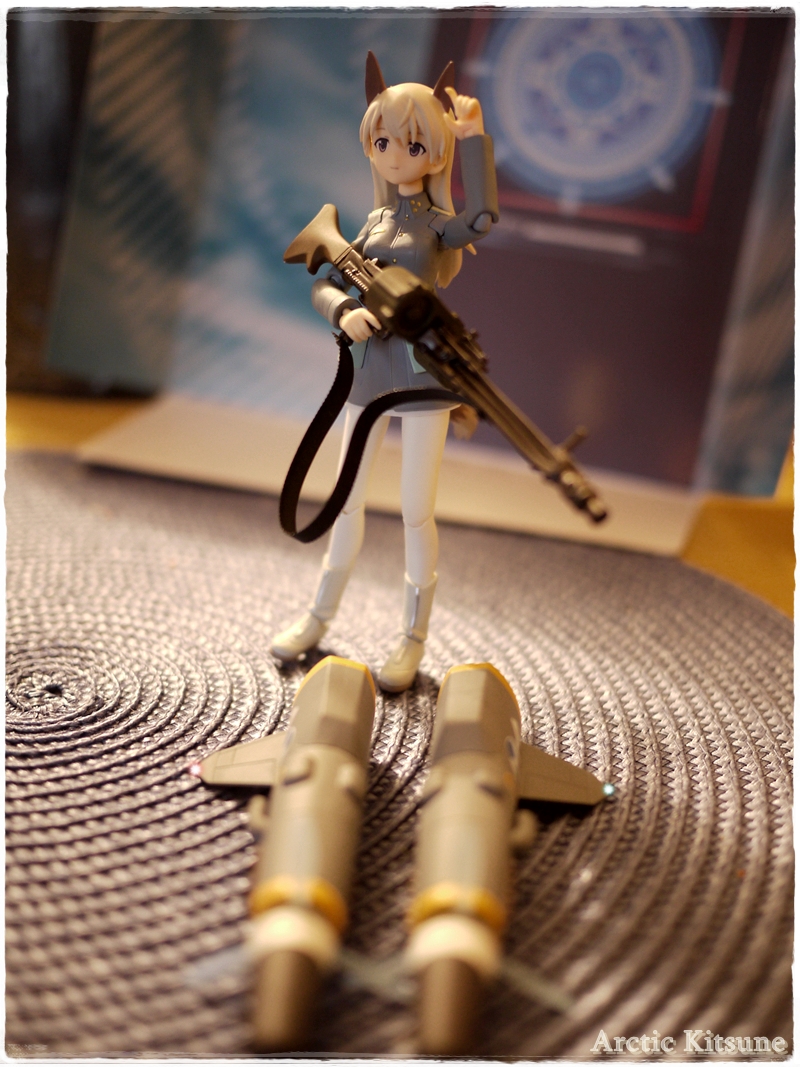 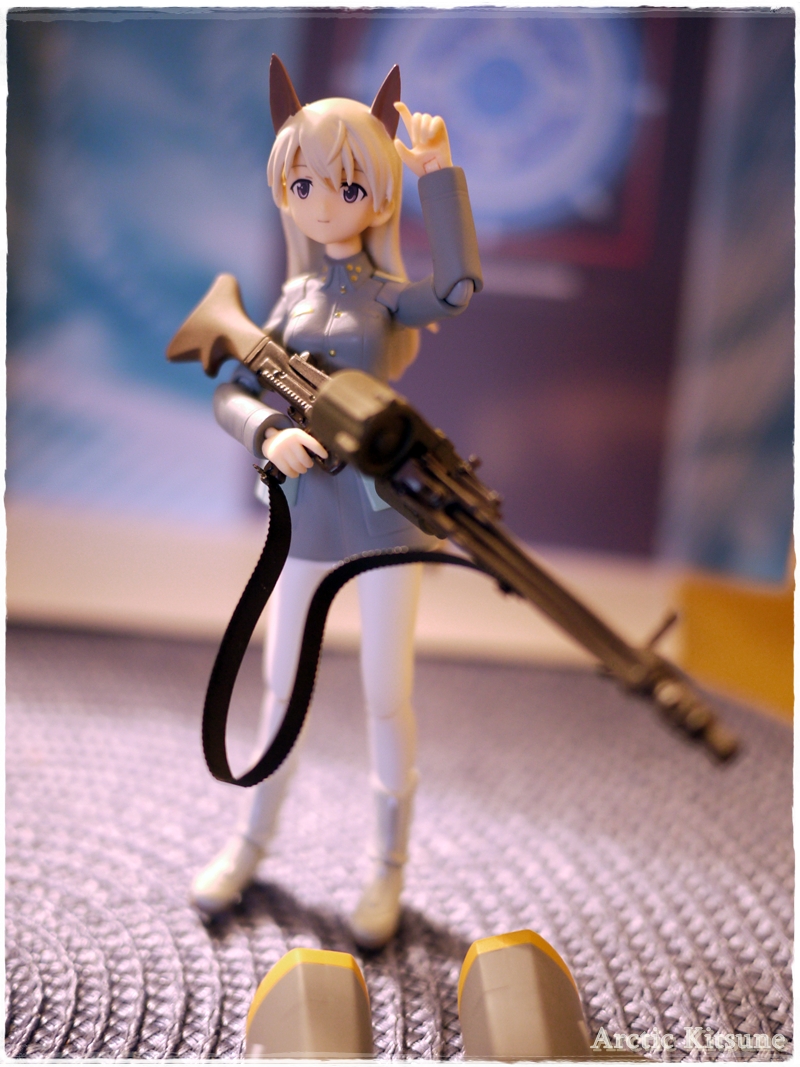 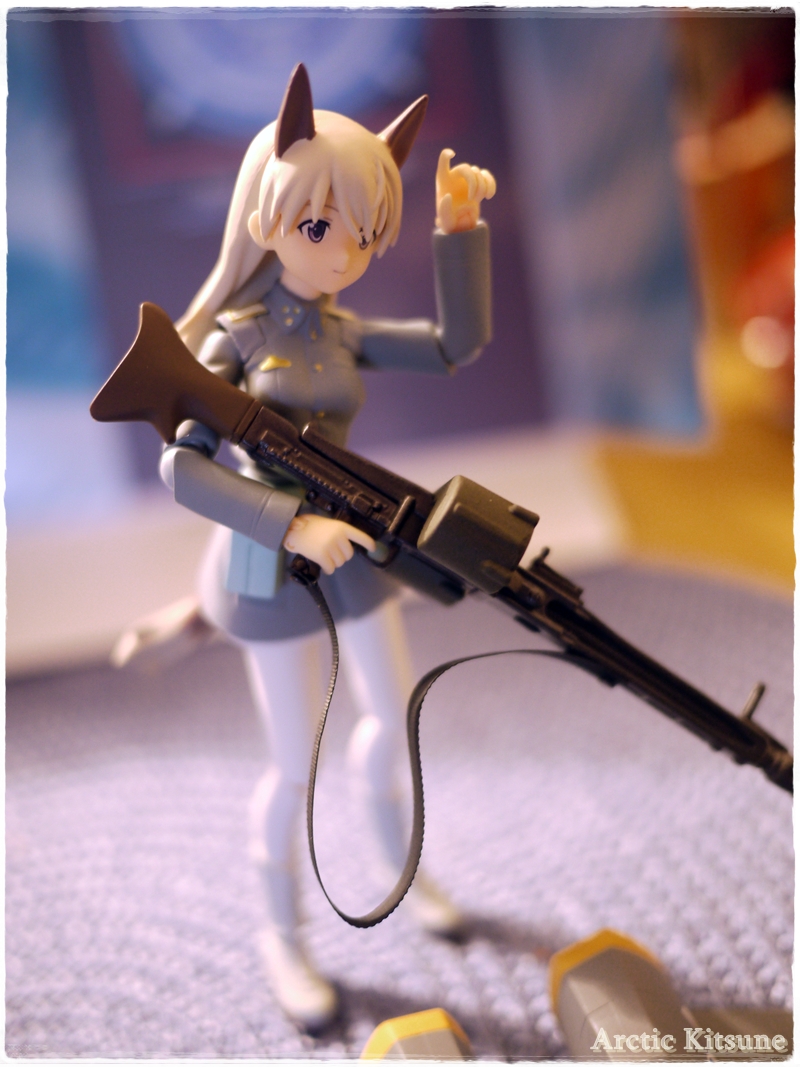 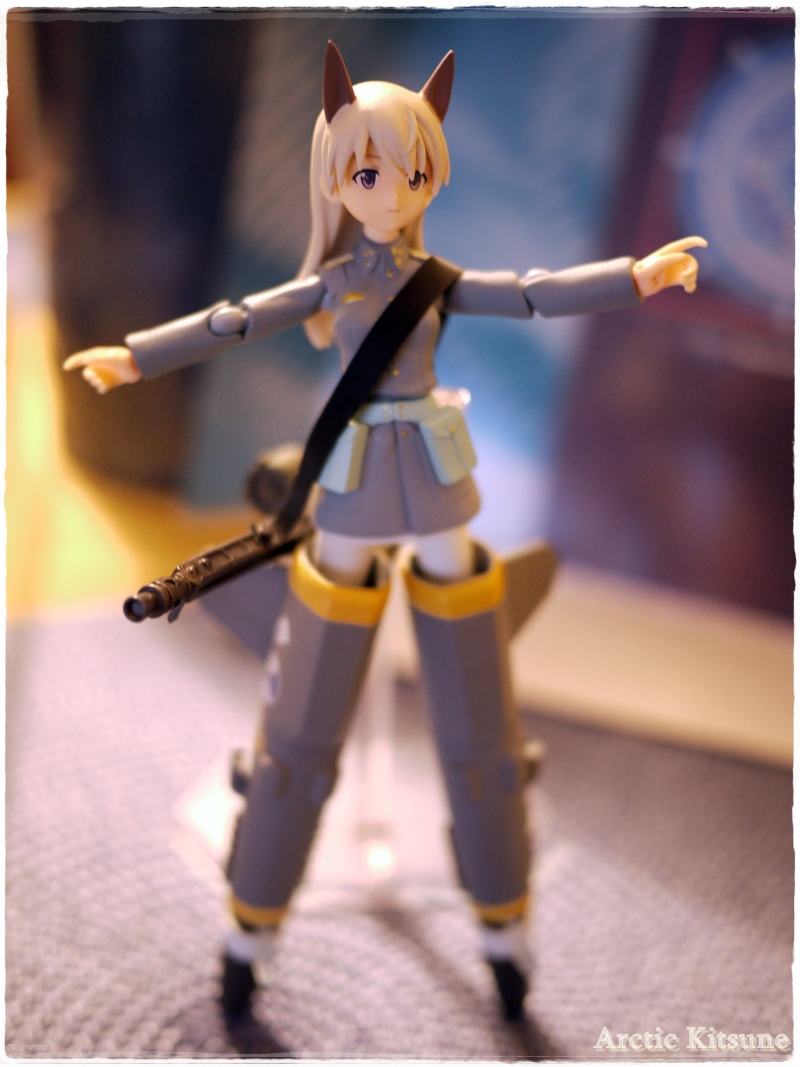 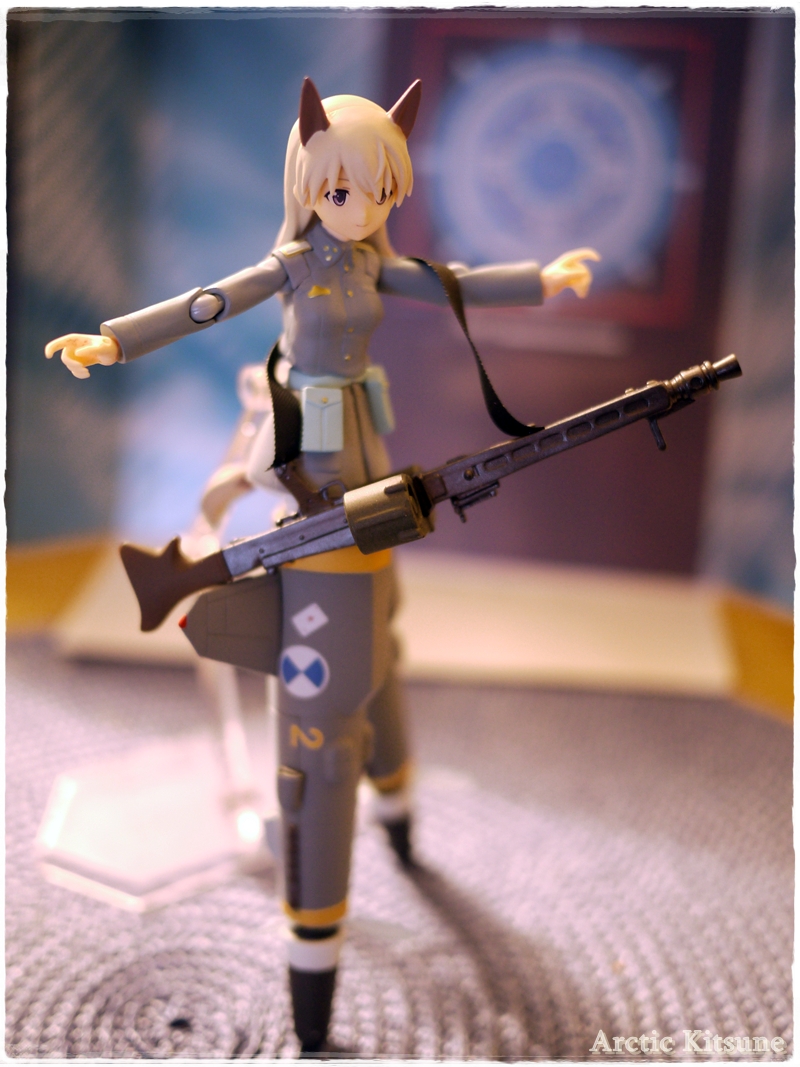 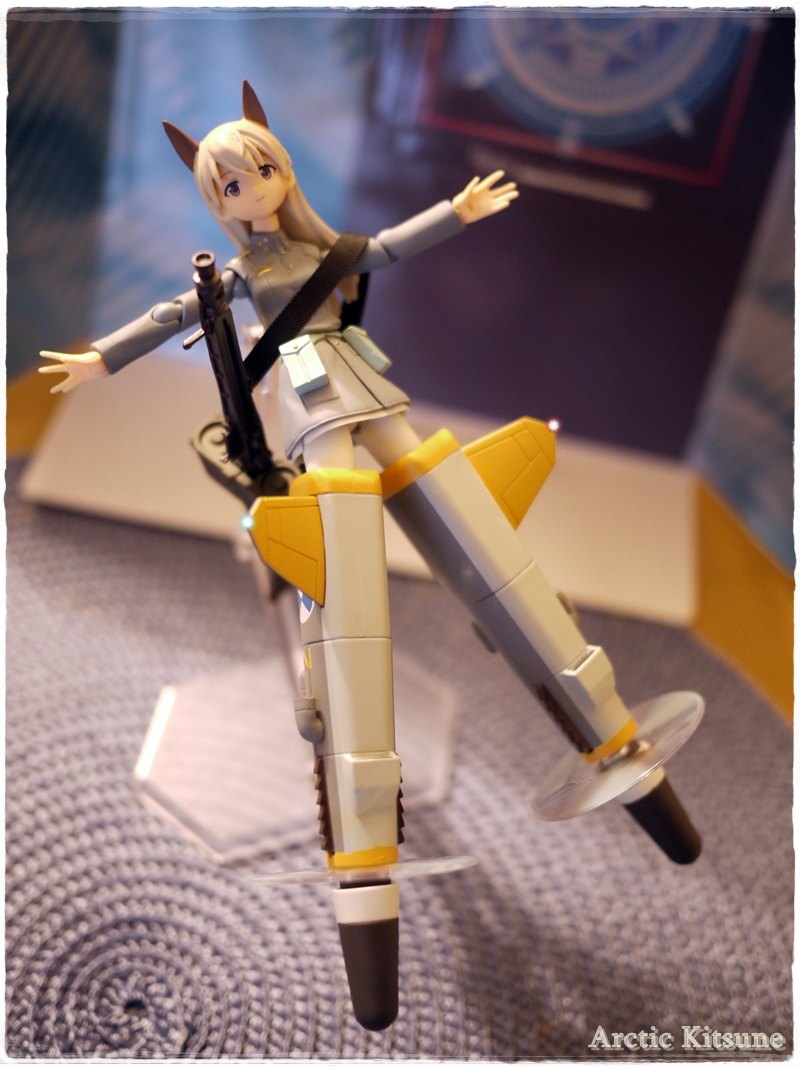 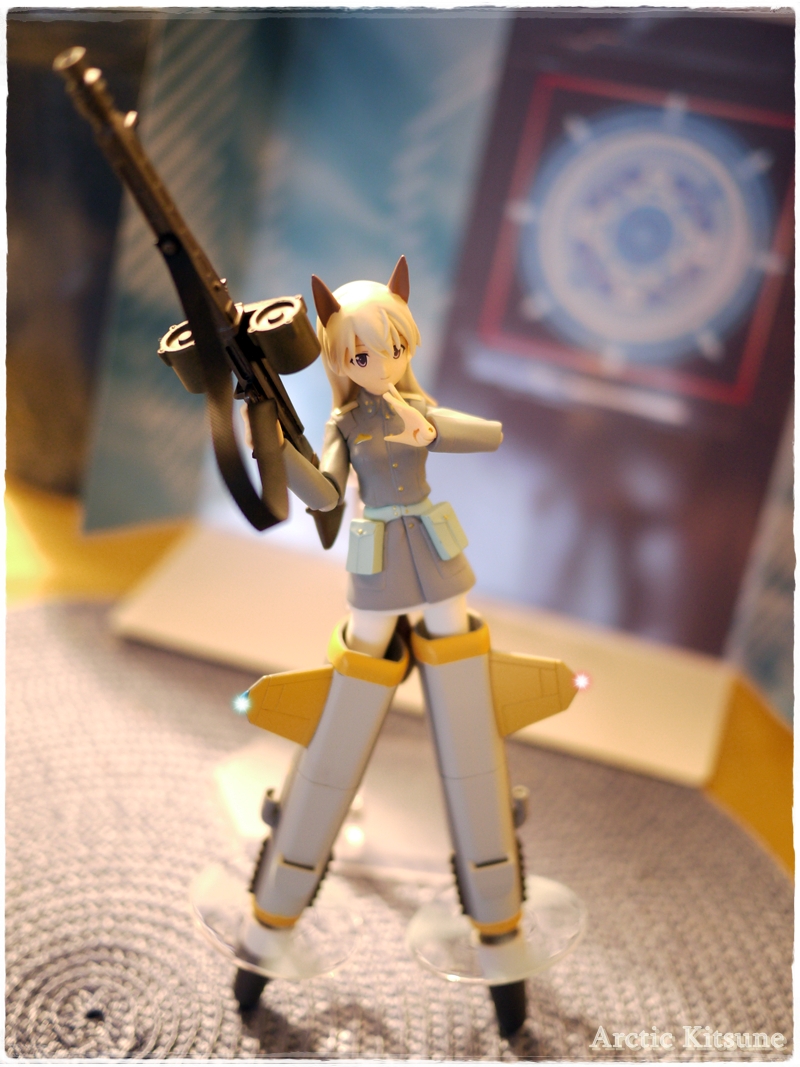 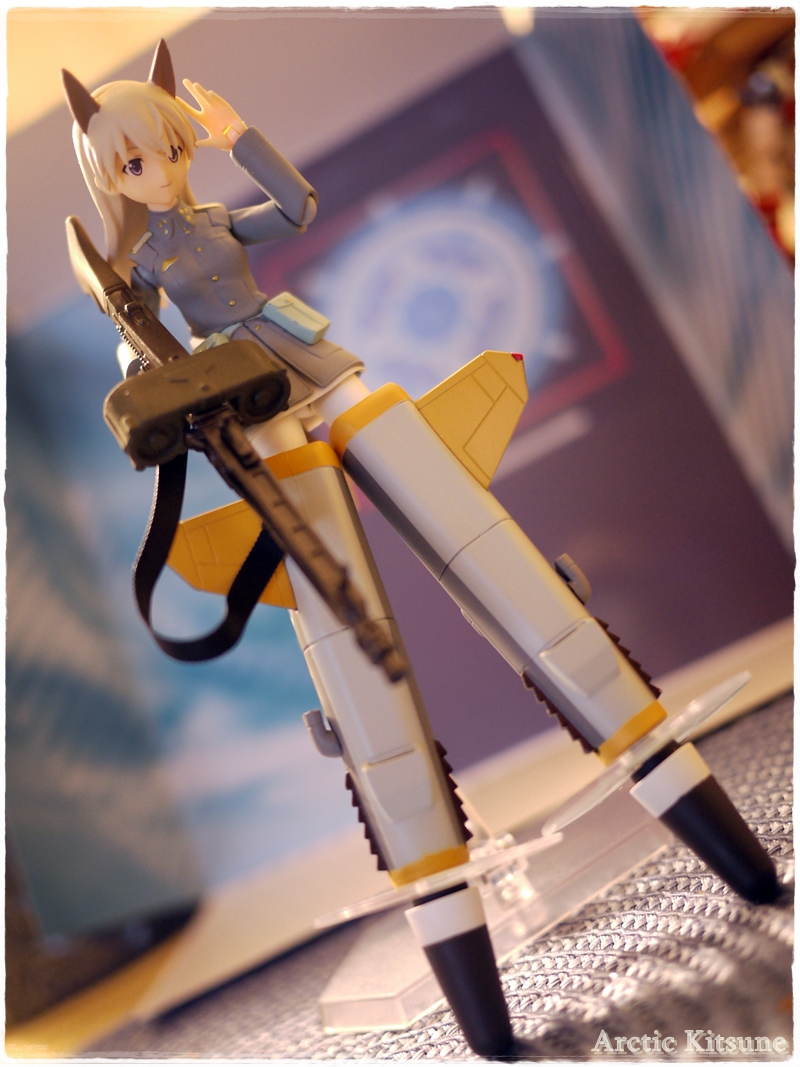 Awesome quality and great range of posing. For a Figma she surprised me with both her quality and her posing. She looks nice when not using her Striker, nor her fox familiar powers. She looks nice and simple with a great range of articulation. When she is in her Striker & fox familiar posture she looks just as awesome, even able to hold her own in a Busou Shinki fight if in a 1:1 scale versus. I love the detailing on her, the flexible skirt, and the accessories she comes with. I’m glad I can even change which direction her strikers point in without much hassle.

Her foxy familiar powers shows nicely in her ears, and not so much as a tail. The tail does look nice, it just keeps popping off on her normal body’s butt, perfectly on the pre-posed waist-thigh portion. Nice that they decided to place pegs into certain areas for “protection”, or similar. Also quite nice how the MG42 looks on her, and that you can strap it around her.

Would I recommend her? Yes, sure! I mean, She has great quality with great range of posing. I found little flaws that can be overlooked.

– Great quality and detailing. You can see her military ranking, emblems on her strikers, and even the camel toe on her pre-posed body part.– Comes with enough accessories that it doesn’t seem that they are “milk-cowing” the line. There is enough parts that you can be satisfied with them. Comes with the right amount of hands.
– Her Witch abilities is that of a black fox with a white fox emblem. More foxes the better for me.
– Her Striker Unit boosted the aviation nut in me; The props can be changed between a non-running prop to one that’s in motion with ease.
– I’m pleased that I can pose her legs freely with her normal Figma body’s legs in any direction I please without running into Figma limitations…much.
– Her pre-posed lower body (which has the camel toe) has two pegs in her knees and one in which you peg the tail onto. Professionalism is seen.
– I like it how you flexible her skirt portion is. It allows posing freedom and the option to peg her fox tail into her butt.

– Her tail can’t be pegged into her normal body’s butt. It however can on her pre-posed “lower body” bit however.
– Eila’s head is off-putting visually by the Figma joint that raises her head higher than should be.
– Her hair conflicts with the stand’s peg and vice versa. A better way of attaching her to a stand should of been proposed.
– Typical Figma limitations of posing and articulation.

Well, I’m pleased with Eila and shall look into doing more photoshoots with her. Need to look into taking images of her in the air and how to do such. If I can solve that I can probably tackle Liberty’s flying issues. Eila & Renge shall be pranking one another, that shall be fun! Until next time! Kon!~