Heyo! Obtained some new goodies for Varakitsu, one or two of them being mandatory and the third for some posing fun. Ordered the three goodies from Volks US while waiting for the first original package to arrive, Volks order being second.

(All images taken with a Lumix GF-1 – Pancake lens; Right-click image and open in new tab/window if interested.)

Found it necessary to obtain a carry case which I was now able to get on a whim. I had the issue of taking her apart from either the waist or taking her legs apart from the hip. Now I don’t have to treat Varakitsu in a barbaric manner while also giving off a more “professional” or “knowledgeable” vibe. I can also carry whatever else I need with ease to any Anime convention or meet up without really worrying about space thanks to all the pockets of various kinds. I also was scouting out various sites only to go for the basic plaid skirt from Volks because well….she needed something to cover the pantsu peaks (panty peak) in public. Also needed something proper for the upcoming Ottawa Doll Show since ecchiness isn’t accepted. Even the foxy kind. The hands themselves were also purchased so she could grasp onto swords, Renge, and whatever else for photography purposes.

Just remember that I’m more of a Busou Shinki person, not a doll person, so I shall obviously be making silly mistakes or just being simply oblivious to Dollfie related stuff. I only purchased Varakitsu as a Dollfie because she is my mascot needing form because I suck at drawing and similar.

(Volks site is down so do check back if curious as to what I purchased.)

I’m actually quite pleased that the three suits Vara’s needs. Same for me for photography purposes. It all does what I imagined it would while being the happiest with the carry bag. I can store loads of stuff in it Â in one go and it looks insanely new. Love it.

Was on the hunt for some pants or skirt for Vara for so long that I resorted to simplistic solution for now. Needed to cover up any chance for others to peak at her pantsu along with being publicly appropriately dressed. I wanted a white skirt to match her arctic fox and snow vibe. They were only for the smaller other types so they wouldn’t have really fit her. I went with the simple option being the plaid skirt for now. 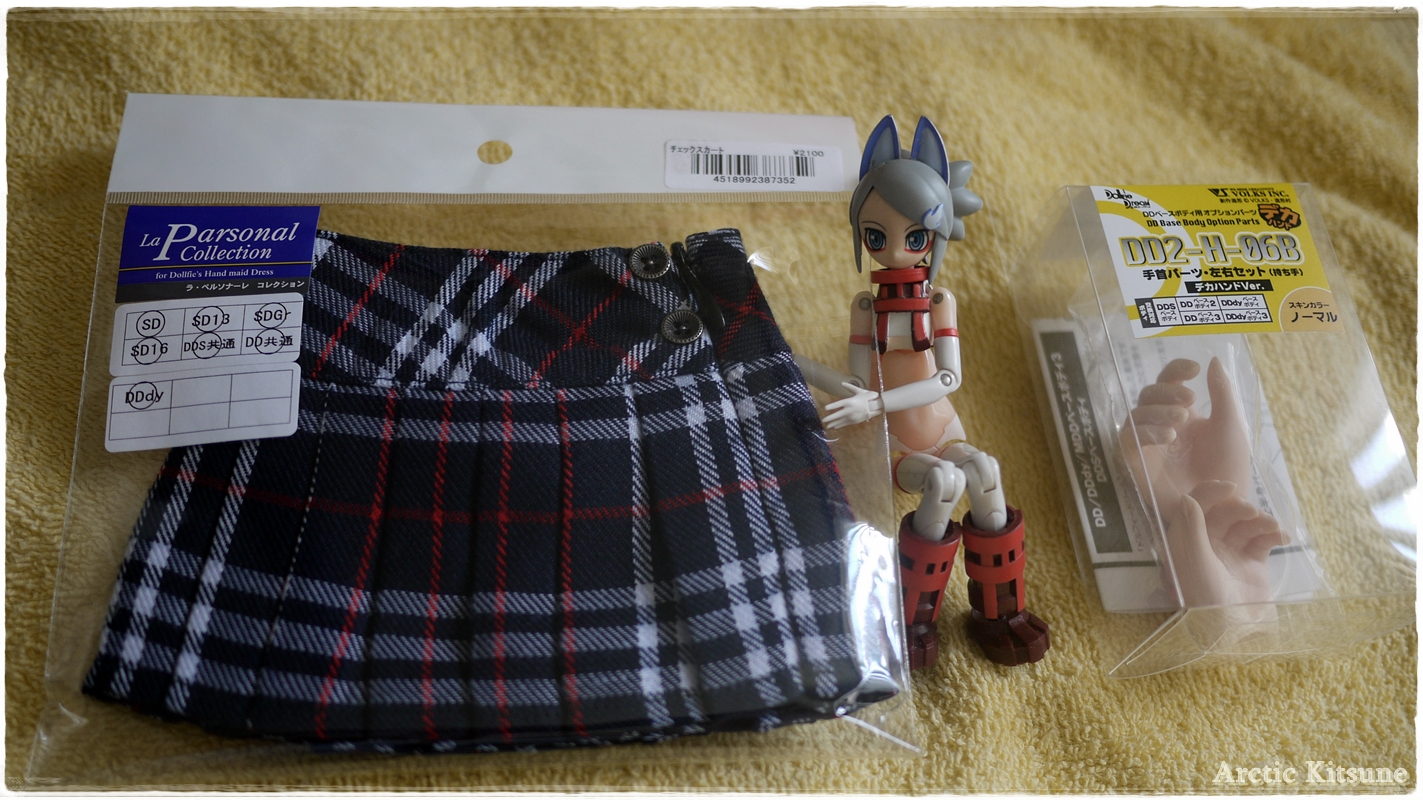 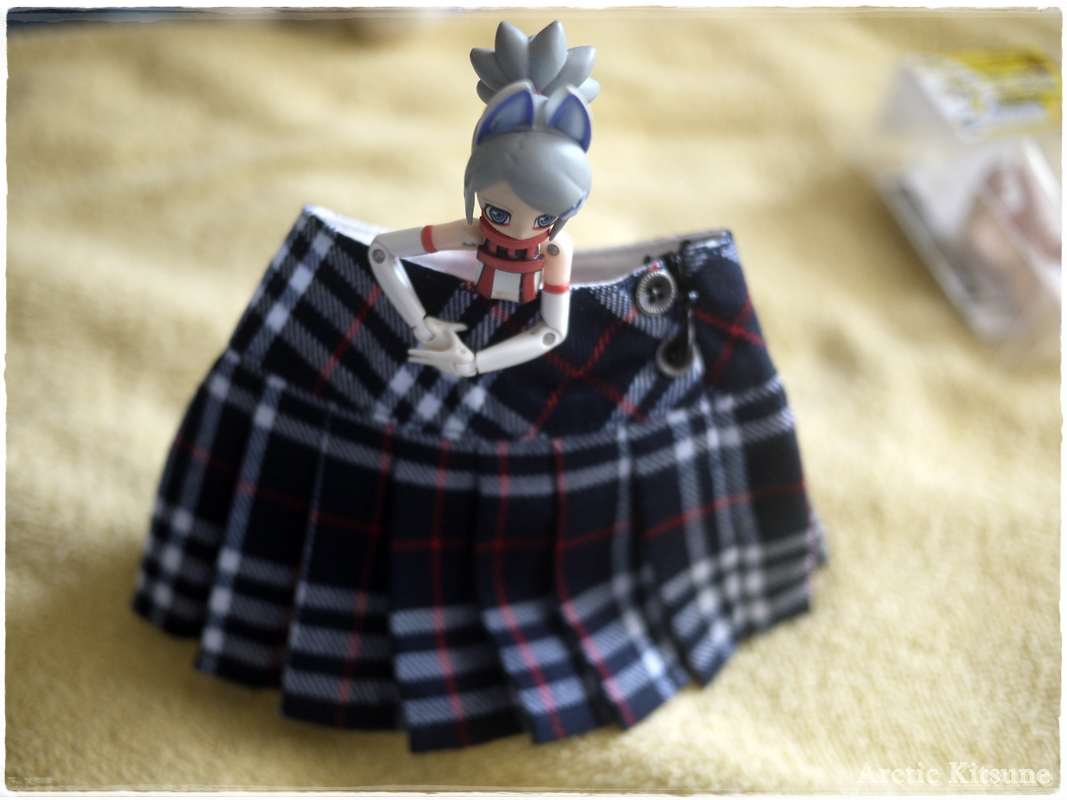 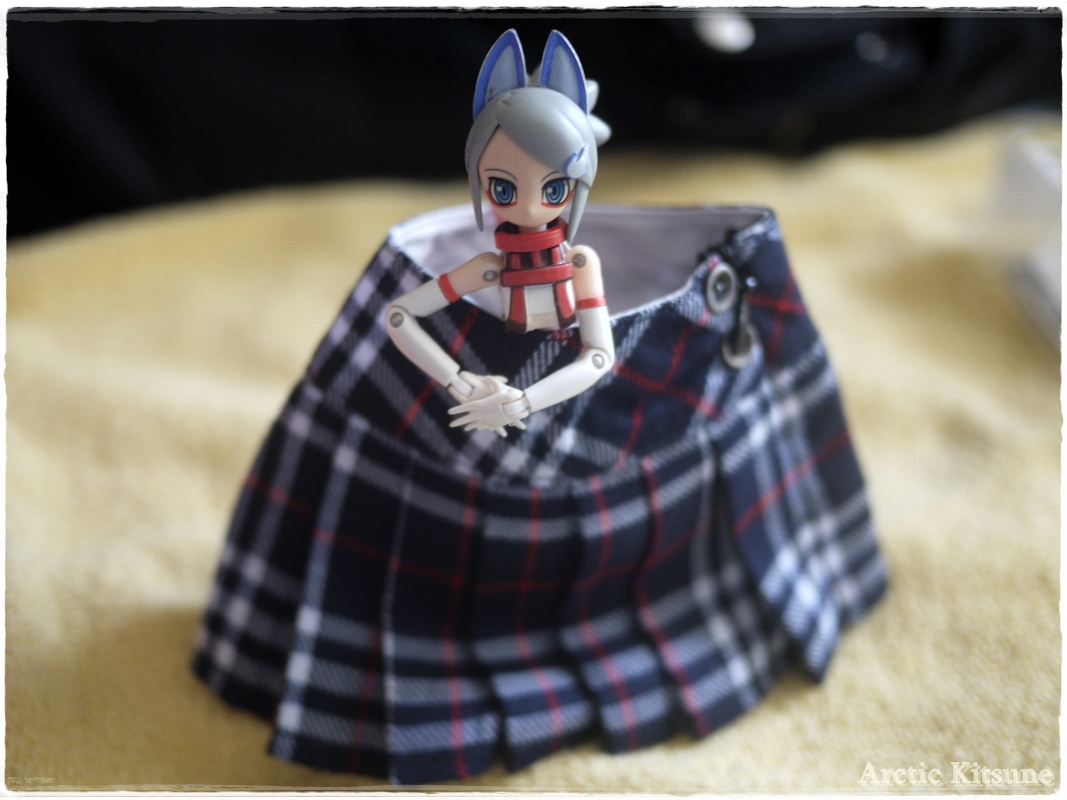 Tried to get her hair as clean and neatly groomed as possible for these images. That wig just doesn’t want to be tamed fully and I just don’t know how to care for it (view above reminder) causing me to improvise. I’ll now aim to get a wig that was recommended to me and am open to any other recommendations as long as the wig is white,grey, or silver. Anything that keeps her looking as an arctic fox type girl.

I’m aware I can hide the knitted long-top under the skirt. Simply wanted to keep things “simple” to save any surprises for later photoshoots. Wish I had a scenic indoors to suit Vara’s photoshooting scale. Could have shared more standing poses. 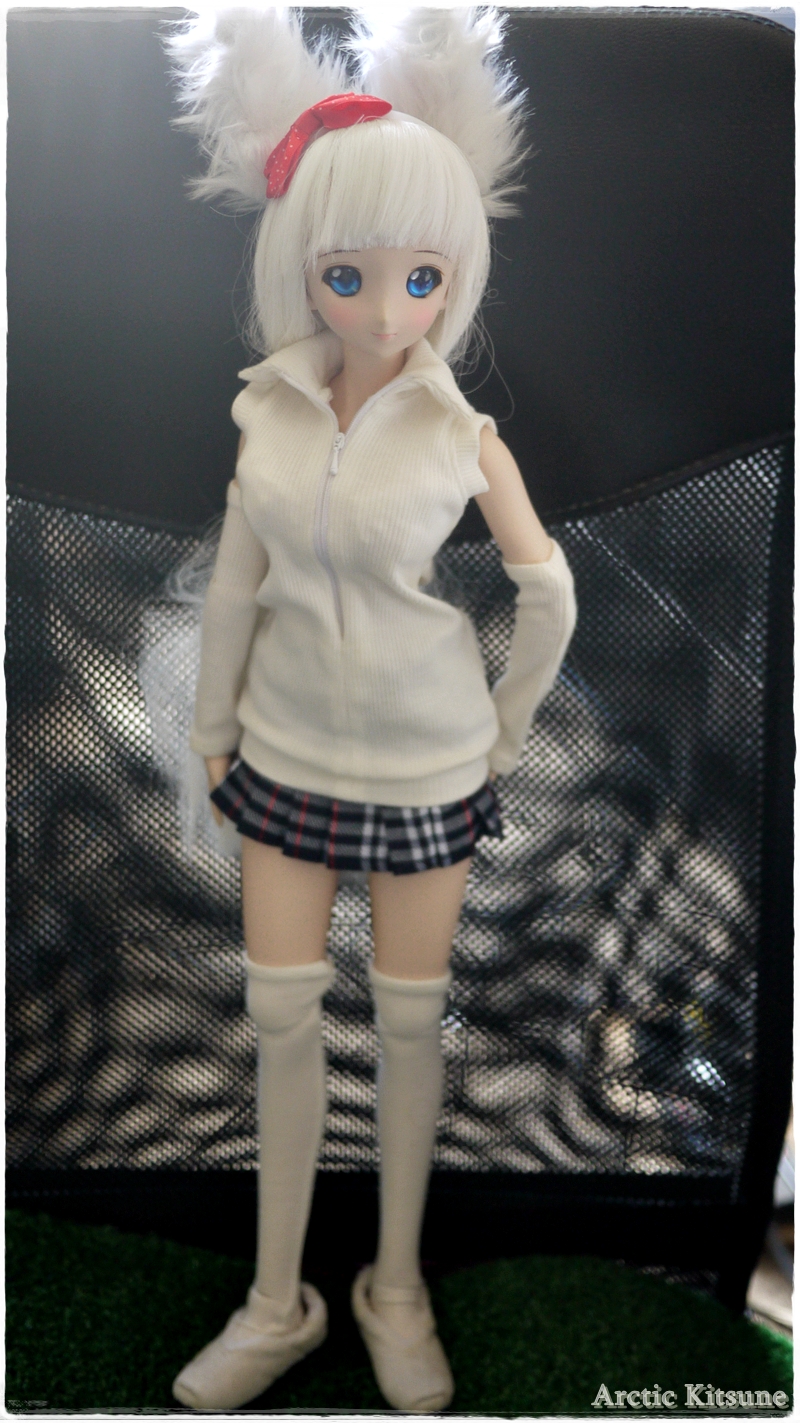 I believe the only issue I have with the hands is me ignorantly choosing a bigger size when compared to the default smaller one. Half of me wants to ignore that while the other half is expecting comments pointing out the size difference that’ll force me to purchase the smaller cuter ones. I’ll worry about that later. 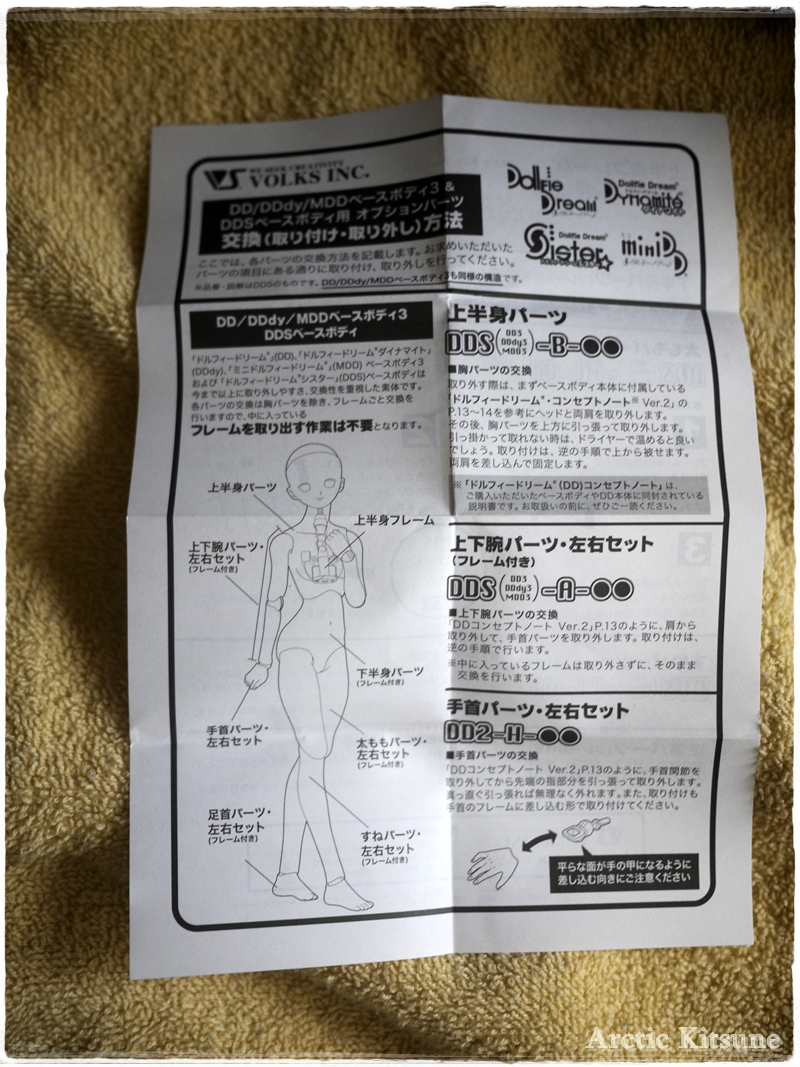 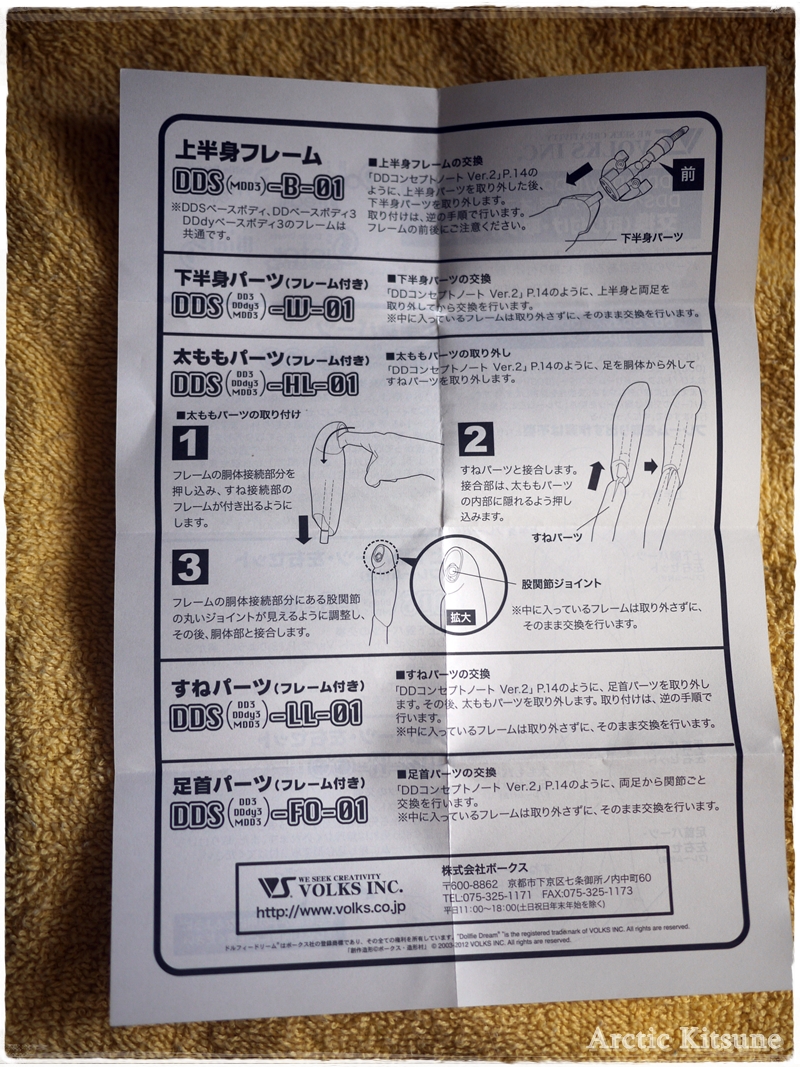 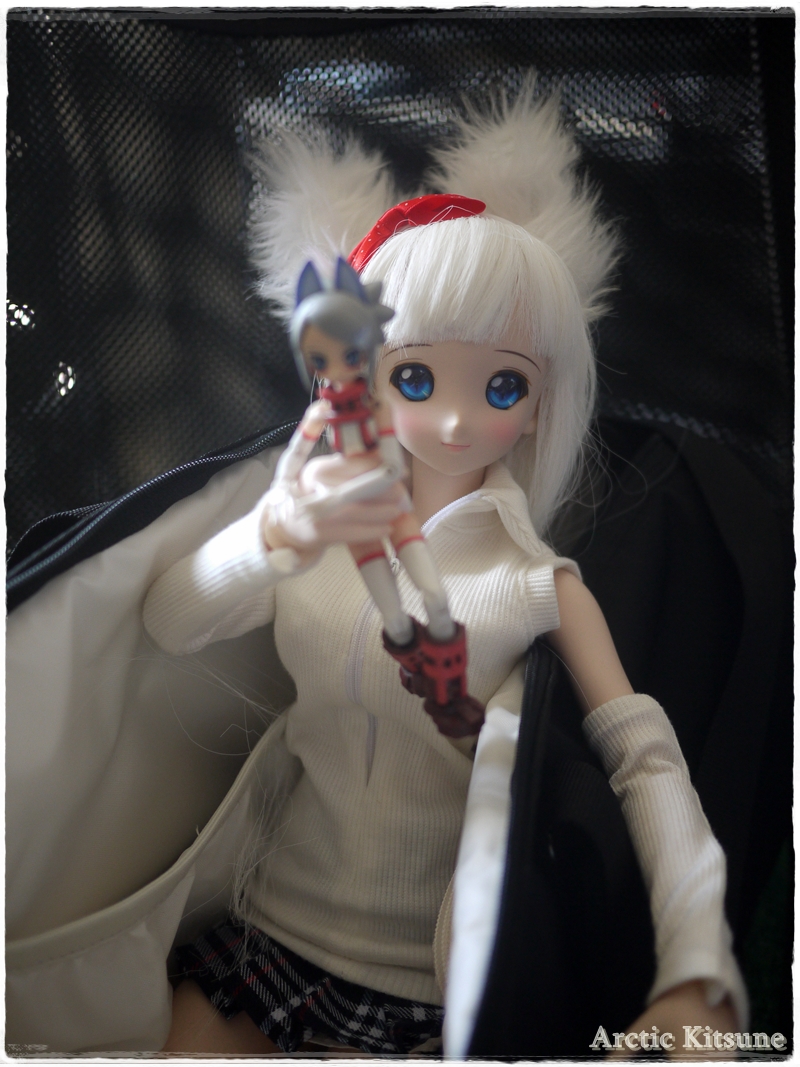 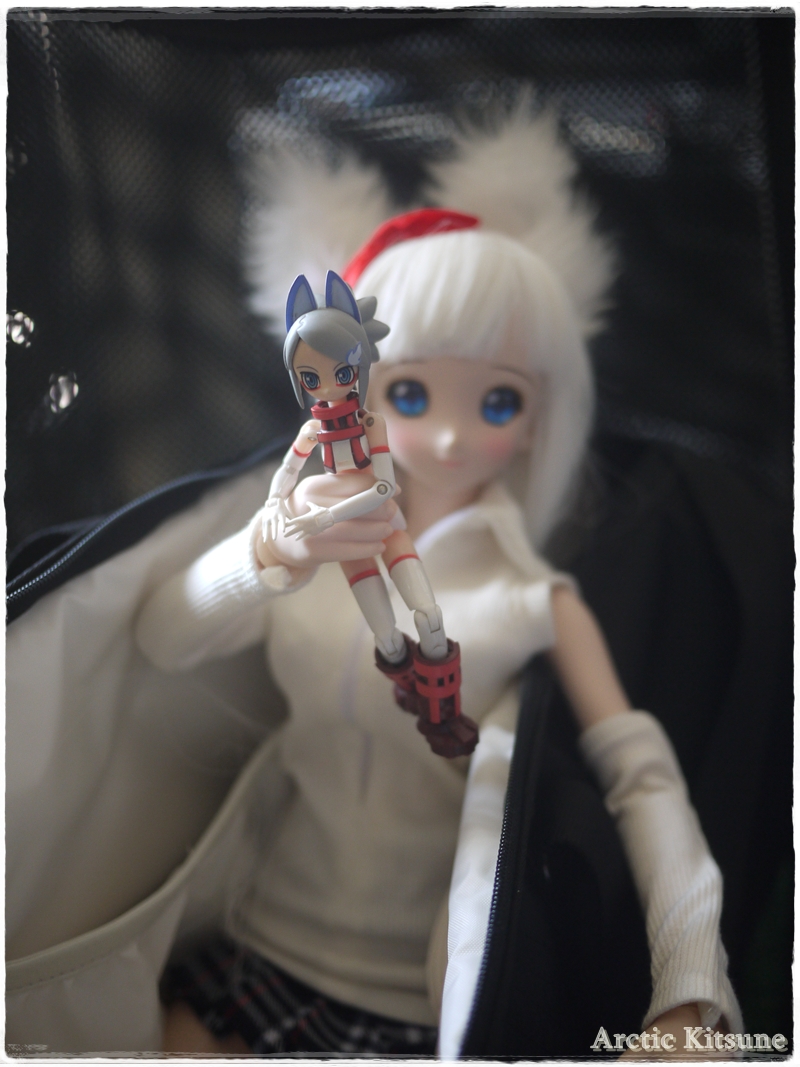 In short – I’m highly pleased with what I purchased. I can happily bring Varakitsu to meets with Renge and Caster again without any real issues (except for theft-happy Ottawa) and without taking her apart finally. The bag does what was advertised, with more coming from it.
The skirt actually looks awesome and took me off-guard with how nice it looks. Shall fiddle around with the skirt and knitted long-top placement in future photoshoots. Was seeking white yet highly pleased with such. Hides the panties nicely.
As for the hands, a nice bonus for me and Vara. She can now wield swords without much trouble and is on the bulkier size when compared to her slimmer, cuter hands. May have to purchase a slimmer set treating the bulkier ones as spares.

Over-all a worthwhile purchase. Now to wait on that troublesome package with one more goodie that belongs to her. Can you guess what it is? I’m going to assume that you most likely can if you stalked my Twitter, Tumblr or saw any hyped up slip-ups of mine.

I wanted to also have Varakitsu cosplay as Koko from the Jormungand Anime. That should be interesting to see if I can make it possible for the October Doll Show or for G-Anime.

Been awhile since I shared anything with Vara, Renge or the moon. I feel like this is the proper time to share because well….I don’t really have any scenic areas for Vara, only Renge and she has been out a few times for the moon.

Been also enjoying some nice lovely thunderstorms, a quarter of them actually being highly enjoyable and severe. I always enjoy thunderstorms because they’re nature’s fireworks. Quite fun taking pictures of the full moon because it allows me to play with something that has been rarely played with on my side. Even pleases my two foxies, one of which has yet to play with the moon directly in an image. Too bad there is light pollution in my images that make the moon appear to be simply another light source. Will also note that the moon went from normal yellow to dark orange, red, and even blue; I missed the blue moon.

Been considering upgrading Pureneemo Caster again because she has been on display for a long while. She’s next in line before after the Ottawa Doll Show. All depending on funds, priority level, and similar.

Thanks for viewing and hope you enjoyed the small batch of images. Treat this article as a tease while also expecting a part 2 for Varakitsu’s next addition….if it does arrive. Wanted to do it all at once but it ended up getting lost, thus the expectations of a part 2 at a later date.