A lovely battle ready Frame Arms Girl has been waiting months to be unboxed, and here she is. The lovely Jinrai, if in the Indigo verison. Lots of blades, ninja starts, knives, and even a butcher knife. She’s quite a character.

Took me way too long to get to this, yet finally did and happy I’ve finally done so. So glad to have finally unboxed & built her up, yet still not done. This is even after getting at her accessories, and even alternate set-ups to her accessories. She has way too much accessories, way too many variations in set-ups, as well as numerous spare parts (12 trays) that I had to leave Jinrai as she was.

Also, my delay was a number of things; Work, games, stress, winter illnesses, winter blues, and etc. She came a few days after her release, same with Caster Fox Figma, yet chose the ‘happier’ of the two which was Jinrai. She kept calling out to me when I had my mental break down on Saturday because of various winter illnesses, work, & etc related happenings. I’m so glad I finally poked at Jinrai. Jinrai is a beast when it comes to her parts, and also obviously being battle ready at that.

Also, a mandatory: “FUCK KONAMI FOR BEING SO BRAINLESS! Killing Busou Shinki the way they did!”

Kotobukiya deserves high praise for tapping into the Busou Shinki market via these Frame Arm Girls, yet the acronym names is highly unfortunate. There’s even an [anime] releasing used as advertising the model kits, even tapping into Konami’s market by improving on various things at the same time. Now we’re just missing a proper ‘open world’ type game. 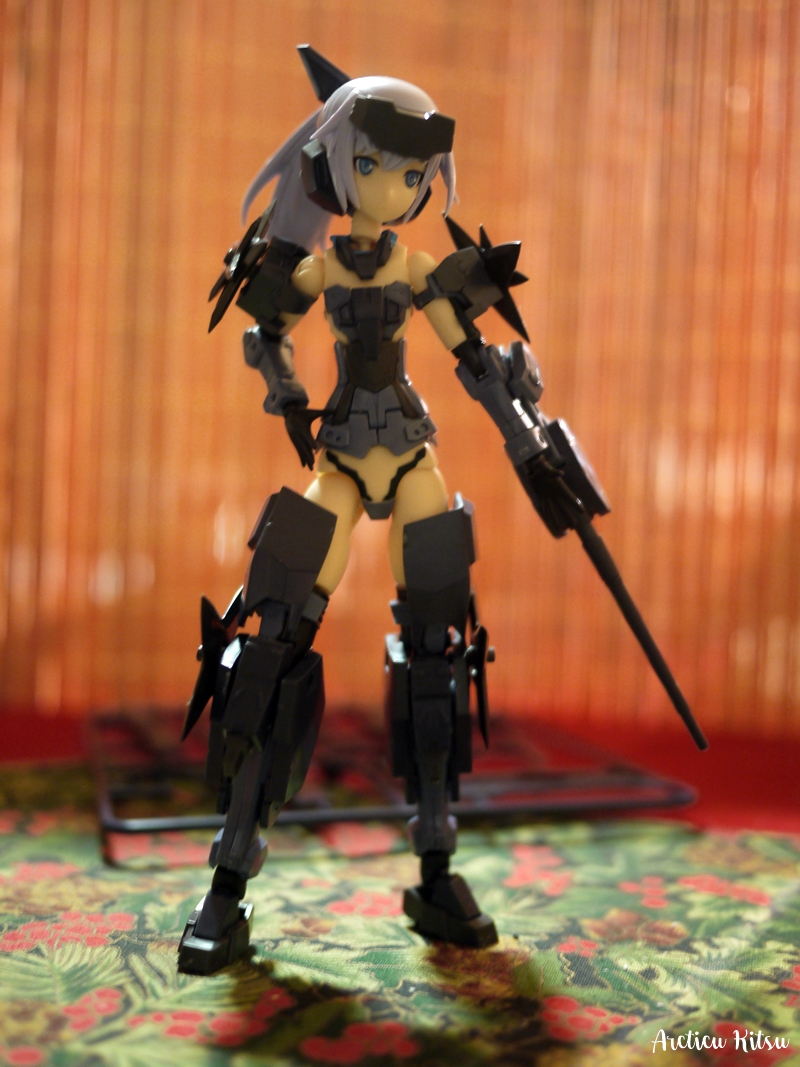 One thing I didn’t properly note, nor share, was her shredded leg that I’m assuming is from another unfortunate Frame Arms Girl in battle wrapped around her leg. This shredded & twisted hulk of a leg should be fused with a more normal legging (look at Materia) which makes it seem she is quite fierce some in battle. She does what needs to be done, or that she even may show no mercy, even bordering into battle sadisticness.

(Scroll up 5 to 6 images to see the accessories image then look to the leftern area.)

Even though it took me months to get to Jinrai Indigo Ver. I’m loving her. She is a gorgeous figure, yet the amount of attention and time sink is vast when building every last part of her. Every little bit, from the shredded parts of another unfortunate Frame Arms Girl, as well as all her weaponry. There’s just so many accessories and so much to do with stock Jinrai that I’m highly impressed, even worn out, that I also have yet to fully complete her. Adding the final touches to make her that glorious FA:G of the family. Again that accronym is highly unfortunate (derogatory), yet the design is glorious.

I love Jinrai for being a modern ninja with all sorts of ninja weaponry, some samurai parts, and one lovely modern turret to deal with enemies from close to medium range. Highly adaptable to her environment that I would truly love her if in a digital gaming environment to command. Not myself personally, yet in a semi-RTS manner. All her accessories (again) overwhelmed me, and I’ve built quite a few Gundam model kits that this one was the most time-consuming of them all. There’s a ton of attention to detailing poured into Jinrai, and it shows.

I sadly cut myself when piecing together by trying to cut away those ‘pegs’ from the part runners, yet that’s now the pain for a gain. You have to feel pain to gain things, and thus I have. I curse, I vent, yet I in the end achieve my goal, and thus I have with Jinrai by having her in ‘figure’ form.

I’m amazed with how you can mix-and-match her accessories that you can place the katana anywhere. Same with the blade holders, the ninja stars, among other accessorie. No joke! They can be put on her legs, her arms, back, or even to the sides on the back. It’s impressive! Just be careful not to lose those accessories! They’re quite easy to lose that Kotobukiya needs to learn from the useless Konami by adding parts boxes to store accessories in. That’s the only fault Kotobukiya has, and it’s with not having parts holders or containers. I now have to go out & buy a few part containers, or maybe one big one, to hold everything from Busou Shinki to Frame Arms Girl. There’s just way too many. I need to re-organize all these parts…..

The flaws with Jinrai? That’s rare seeing as how I’m struggling to think of a fiew. Would probably be the model kit looseness that you may have to go back and glue a few parts so they don’t fall apart. If you want to even take them outdoors you’ll have to strategically glue them, or pre-prepare for any indoor & outdoor shoot (mostly outdoors). It’s so easy to lose parts. Her small feet, and parts randomly falling off during falling off. I guess even her torso connection coming loose when not staying snug in that rubber/plastic ball.

I recommend Jinrai Indigo Ver. highly, and even rate her a high 9.5/10. That rating is quite rare, or so I believe, that I respect Jinrai I hell of a lot.

I’m sure I have more to list, yet with how overwhelming (in an awesome sense) this kit was I need time to further piece things together, even process Jinrai as a whole. Insanely detailed from my perspective.Â  I also have more Frame Arms Girls pre-ordered that I’m awaiting their release and arrival. One is even on her way.