Hey! Happy New Year! I know it’s not really foxy as it’s more of a sheep year than a fox year. Have a lovely arctic foxy to share along with some light ramblings. Happy Sheep New Year & 2015!

Happy New Year! Hope you enjoyed 2014 in some way, shape, or form. I know I have, andÂ  accomplished quite a bit. Not enough, just those that needed to push me forward higher into 2015. Others obviously being Varakitsu sided. Shall soon follow up with a year in review on the blog side of things after this one. This is just to simply chime in on the eve of a New Year on 2014 transitioning into 2015.

Also wanted to do a little ‘throw-back’ to Varakitsu’s younger days when firmly hugging onto a sake bottle. The time of ‘Renge’s Spring-Dance‘. Holding the sake bottle from before while also now happily toying around with the new Tim Horton’s cup. 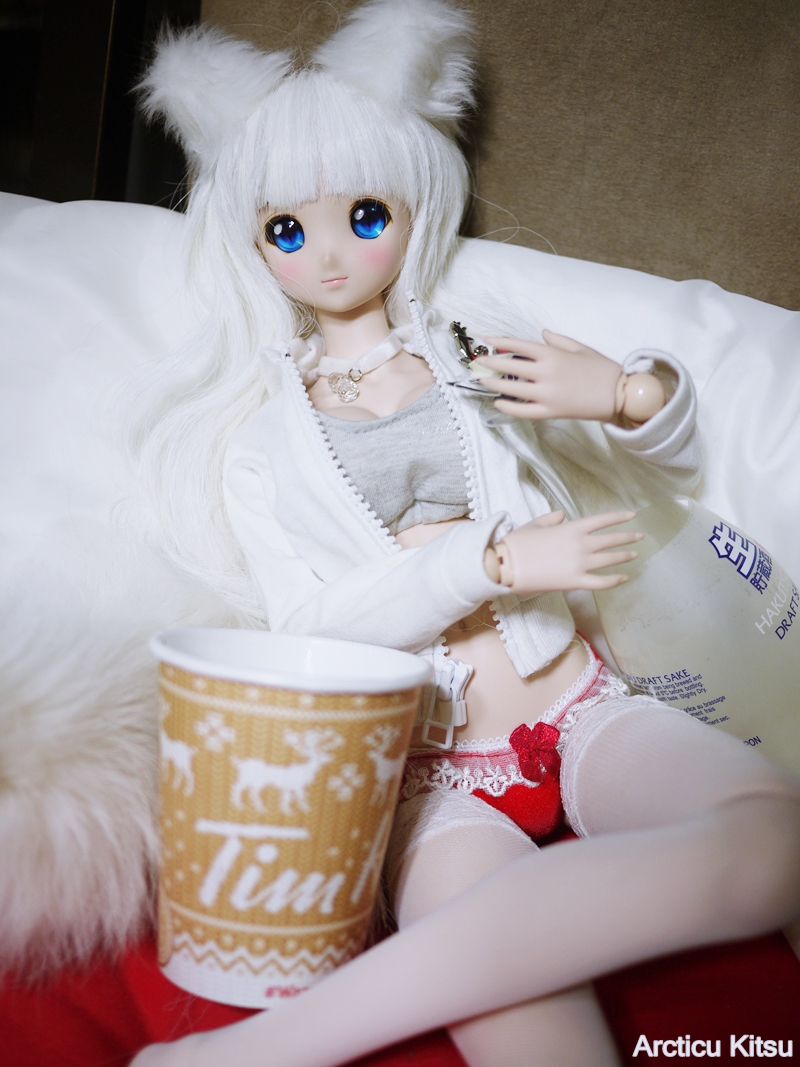 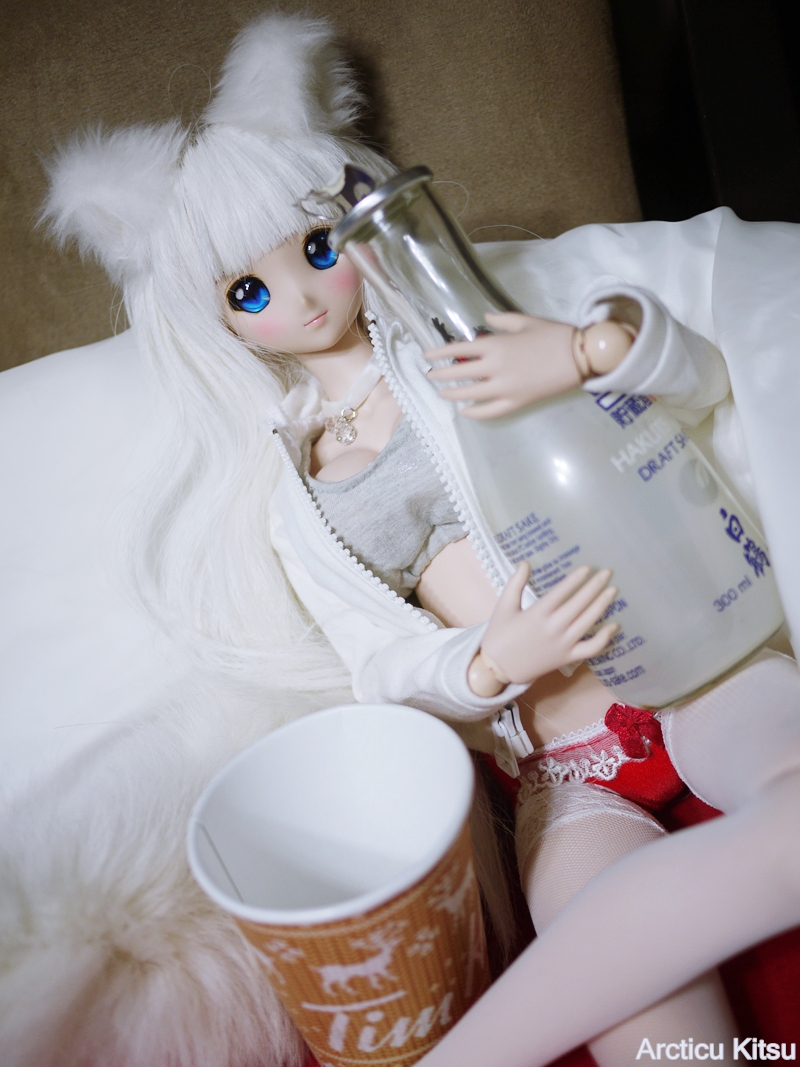 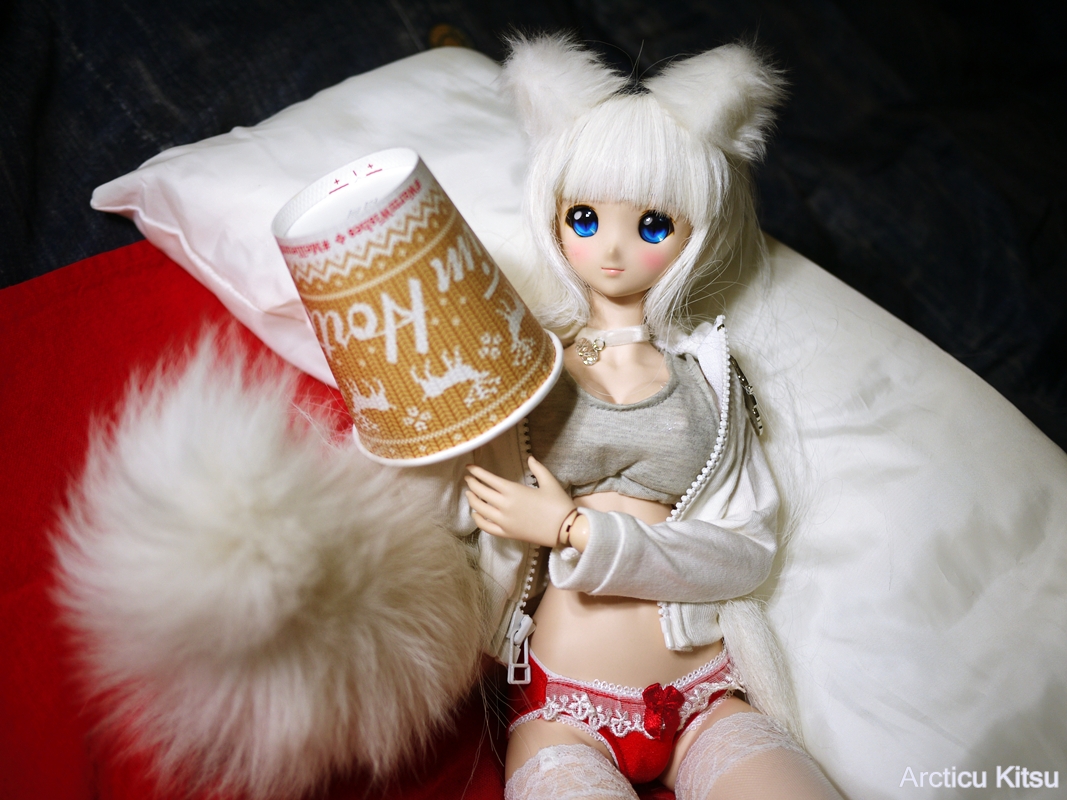 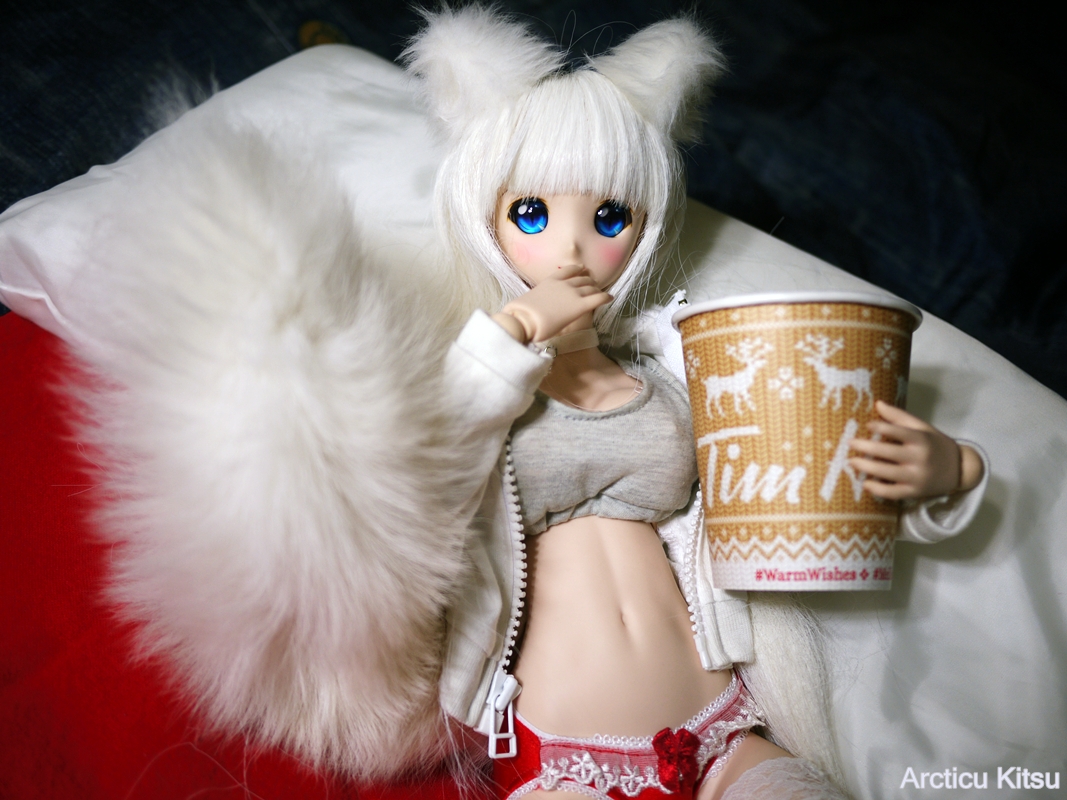 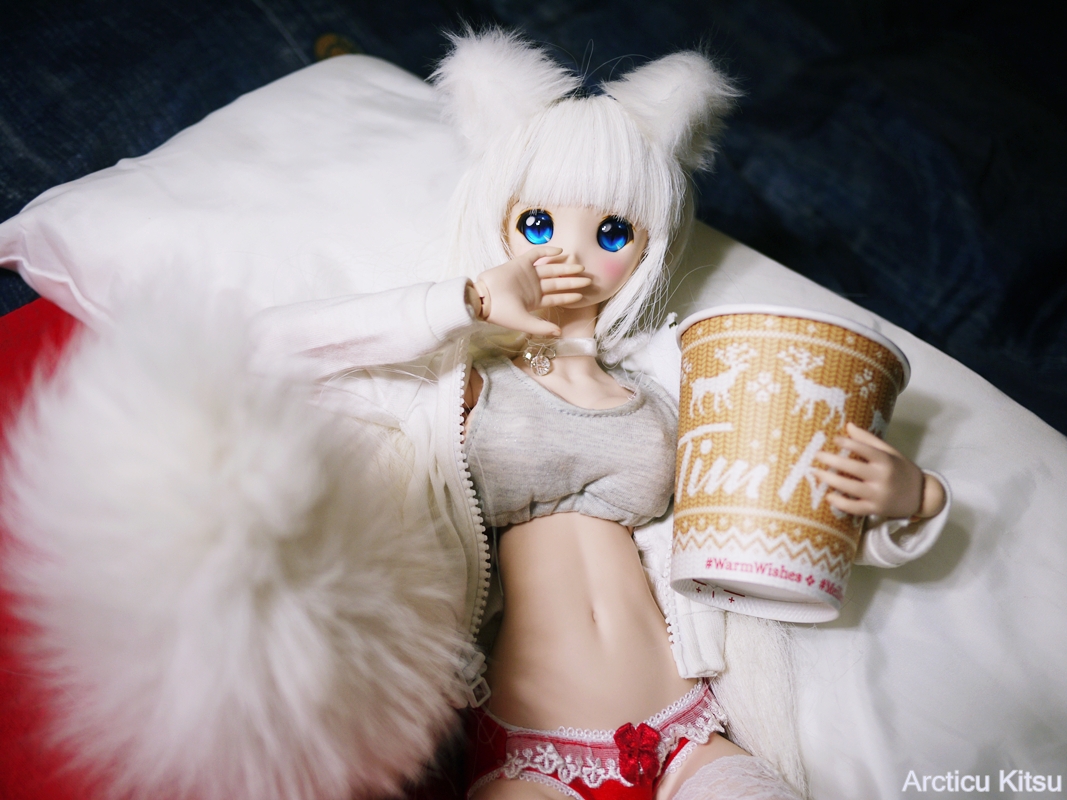 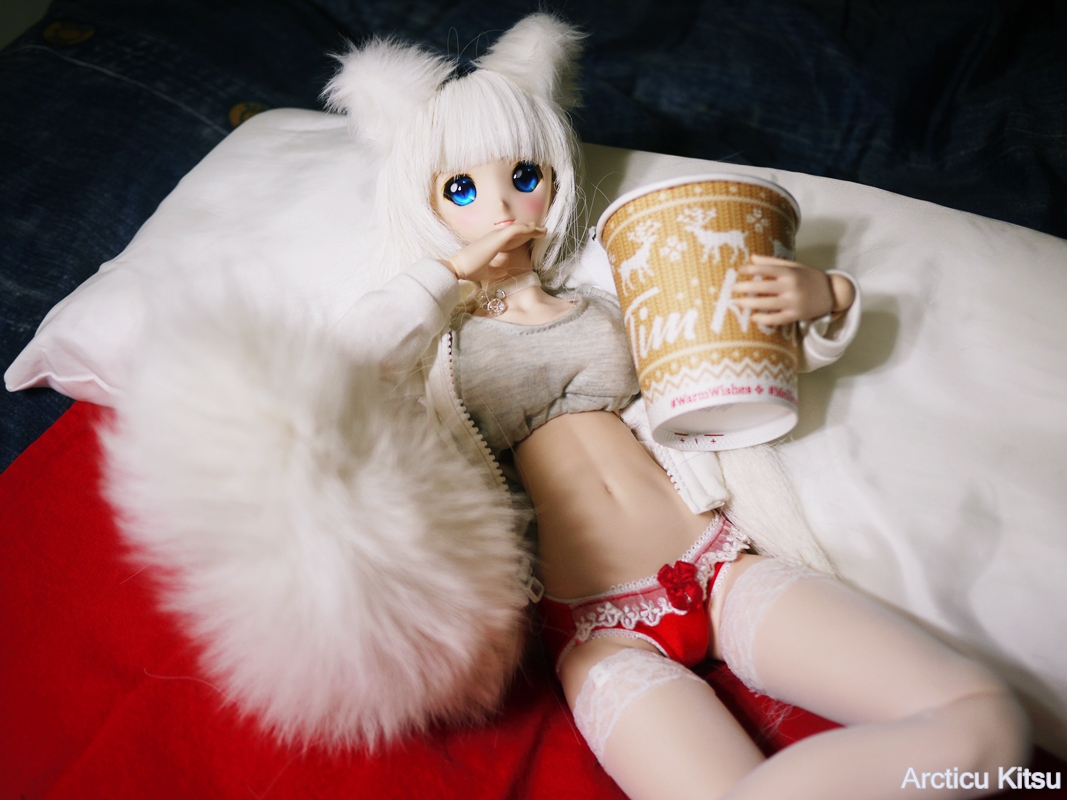 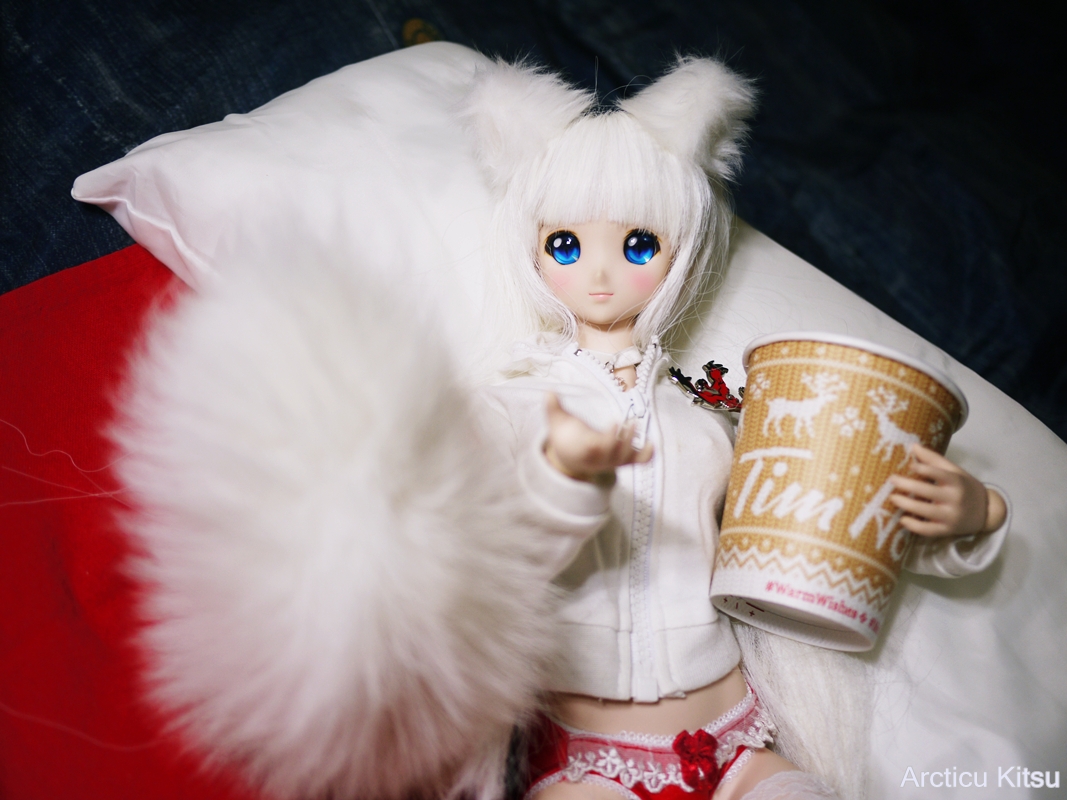 I would have to say that 2014 was a great year, just not a year that was all too kind. Wasn’t as horrible as 2013, just something forcing me to become more….jaded, or zombie-like as it continues to test what I’m actually interested in, and what I am not by constantly provoking me. I was more shackled in things I could and couldn’t do, more so with the growing lacking interest in the hobbies I’m in from other sides. To me 2014 was both a happy and depressing year because I was forced into detaching myself from the things I had once enjoyed the most. Constantly getting into some sort of argument, dispute, or finding lack of interest when out in the actual world. Constant disinterest.

Now to sum everything up into a Pros and cons before going into detail a bit later.

Goals for 2015?: Very obvious. Travel! Travel! Travel! Even if it isn’t realistic, nor far to my desired destination. I need to travel! I can’t stay stationary anymore More images of Varakitsu outdoors, even in her sexy nightgown. The rest? Keeping that under-wraps as that’ll simply be jinxed if mentioned in detail.

Not the best way to list the year, yet it’s what I can recall from both my memory and blog’s archived thoughts. I’m going to focus my energy on stabilizing my situation while even considering going silent to focus on the first point in the con list as it’s too crippling. May also seem appropriate as I constantly spam both Twitter & Tumblr a tad bit too much. Can’t really go into detail as it’s both embarrassing and a frustrating private issue. This blog and Tumblr also being more Anime themed than overly private issues and+18 (HaremMate posting on the ecchi level) that I can’t vent fully.Â  I also have some plans I want to put into motion to spoil myself further while also doing some ‘social experiments’ at the very same time.

I’m still feeling conflicted about obtaining more dolls (even Vara in doll form) that aren’t my ‘original characters’. We’ll see if I even do obtain new dolls, or if I will still solely focus on Varakitsu. I’m strongly eying numerous doll parts to realized numerous foxy characters, and an Ice Queen (AGK!). Shall possibly even try to force Vara into a digital gaming environment, if given the appropriate opportunity when the gaming industry becomes more imaginative and less tense in concept. When things go right I also want to solely focus on taking images of Vara outdoors, and only outdoor, to get the best out of Varakitsu.Â  This is after I tend to my issues first as they’re crippling when it comes to meet-ups and festivities.